Jejudo police are looking into the possibility that the woman found dead on the island may be Chinese.

The woman was wearing a skirt with a Chinese lettered tag, and her fingerprints did not lead to a domestic match so far.

The victim, presumed to be in her 30s, is between 160 and 165 centimeters tall, and wore a winter T-shirt and skirt with leggings. 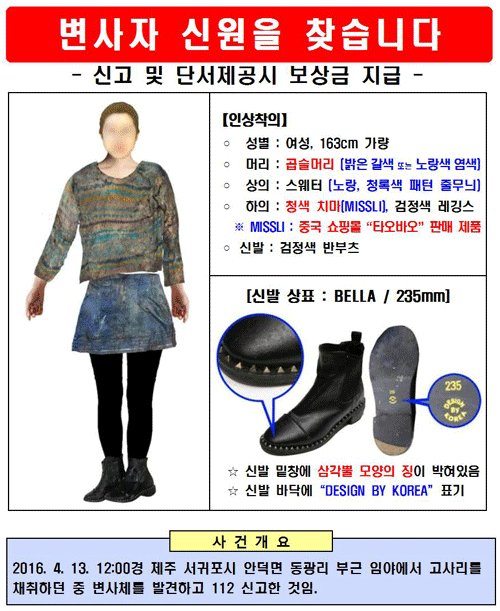 Although the decay prevented the police from determining the exact time of her death, they presumed she died no more than four months ago based on the testimony of a nearby farmer who had planted barley between December and January without noticing the corpse.

The woman had been stabbed with a sharp object six times on her chest and neck. Preliminary autopsy revealed her neck wound as the direct cause of death.

The police said they dispatched 80 policemen to search a radius of 5 kilometer for lost belongings without any success.

The search, however, revealed that there were no special signs of struggle, leading the police to think that the victim had been murdered elsewhere and moved to the field.

Seogwipo police said they made an urgent request to the National Forensic Service for a DNA test to discern whether the victim had been sexually assaulted, which could help track down the perpetrator.

The police are currently analyzing the surveillance camera records while also inquiring for eyewitnesses.

The woman was found near a barley field in Andyeok-myeon, Seogwipo. The location is oughly 100 meters from Pyeonghwa-ro paved road and is easily reachable by car.