The opposition parties’ surprisingly solid performance against the ruling Saenuri Party in Wednesday’s general election signaled an upheaval in the current two-party system and a significant setback for the incumbent administration.

Exit polls and early predictions showed the 20th National Assembly to be outnumbered by the opposition party lawmakers for the first time in 16 years. The three-party system will be the first in 20 years.

The result, in particular, gave a landmark victory for the fledgling People’s Party co-led by Rep. Ahn Cheol-soo by sweeping good portion of support from the main opposition’s traditional stronghold in Gwangju and Jeolla provinces. 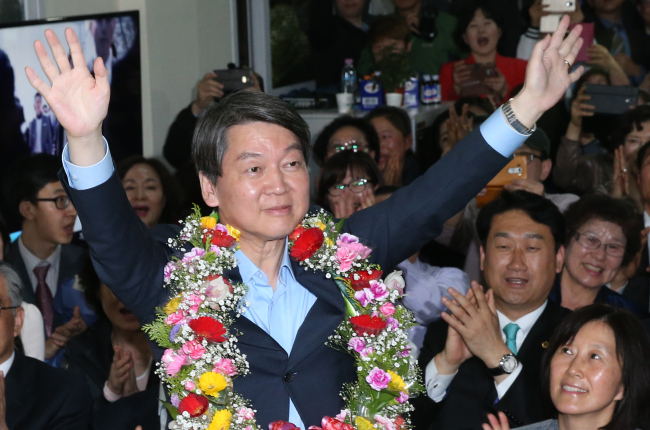 People`s Party leader Rep. Ahn Cheol-soo celebrates his party`s strong performance in the general elction at the party`s headquarter in Seoul on Wednesday. (Yonhap)
The People’s Party is expected to hold a casting vote in the incoming Assembly as the main parties struggle to regroup after seeing lackluster results.

Without a majority party, fierce politicking is also anticipated among the parties to realign their factions and rejoin forces with party defectors who have won on different party tickets or as independents.

The Minjoo Party of Korea, which narrowly managed to block the Saenuri from maintaining majority, is also expected to quicken their calls on the People’s Party to merge.

“It seems to me that the voters casted referendum not just on the Saenuri Party but also toward the President Park Geun-hye,” said Lee Jung-hee, political professor at Hankuk University of Foreign Studies. “How the People’s Party would position itself would be crucial to the upcoming political landscape,” Lee said.

“(The election) sets a stage for the People’s Party to create a storm on the political landscape. But they would end up being sandwiched between the two bigger parties unless they become a political party based on national support.”

Should the opposition parties see eye-to-eye, the opposition-controlled National Assembly would grant the liberal parties power to block the Saenuri Party and President Park from pushing controversial agendas that aim to overhaul the labor market and relax regulation on the service industry.

The conservative party has been seeking to amend relevant laws that prevent the economic and labor bills from passing the Assembly. The National Assembly law stipulates that pending bills cannot be put to a vote in the plenary session without the approval of three-fifths of the attending lawmakers.