“The government’s support is essential to transforming the discovery driven from the basic science research into practically applied products, and thereby, boosting the innovative entrepreneurship,” Peretz Lavie, president of Technion-Israel Institute of Technology in Israel, said in an interview with The Korea Herald on Tuesday.

Lavie, who is considered one of the founders of sleep medicine, has served as Technion president since 2009. Technion has played a major role in fostering the innovation and entrepreneurship ecosystem in Israel since 1912. Lavie visited Seoul to deliver a plenary speech at the 2016 International Presidential Forum on Global Research Universities. 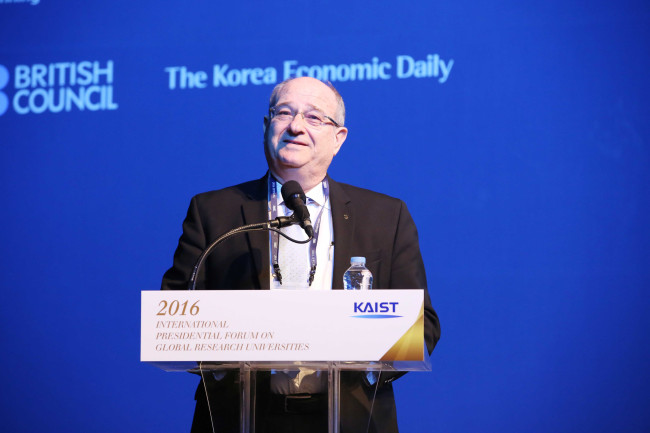 International Presidential Form on Global Research Universities.
“The government’s four systematic support programs have helped students check the value depth of their ideas. The public programs allow them to test their ideas and see if their proposals have commercial values,” he said.

The Israeli government administers four specific programs -- Magnet, Magneton, Nofar and Kamin -- which provide support ranging from precompetitive research and development to applied research. All proposals are reviewed for technological feasibility, merit and risks by an independent group that consists of government officials, faculty and industry experts.

To better encourage entrepreneurship, he said his school has opened multiple virtual multidisciplinary research centers, incubators and accelerators, which all together have become a quasi-R&D center, along with various entrepreneurship courses and start-up MBA programs.

“Along with support from the government, various factors such as the involvement of students as researchers, innovators and entrepreneurs, support of risk-taking research, multidisciplinary collaboration and institutional support of technology transfer served as ingredients of the school success,“ the president added.

Upon the active government’s support and the school’s efforts, more than 1,600 companies were established by some 1,300 graduates between 1995 and 2015, bringing $30 billion from acquisitions and mergers, drawing $6.8 billion of investment. Israel records the second-largest number of companies on Nasdaq, with two-thirds coming from Technion, according to the school.