Rep. Kim Moo-sung, the outspoken leader of the ruling conservative Saenuri Party, made direct shots at individual opposition candidates. The Minjoo Party of Korea’s Kim Chong-in, in contrast, kept his aim at the ruling party in general and the incumbent Park Geun-hye administration. 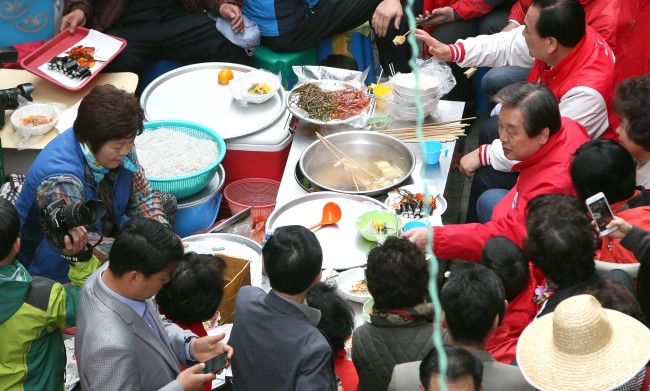 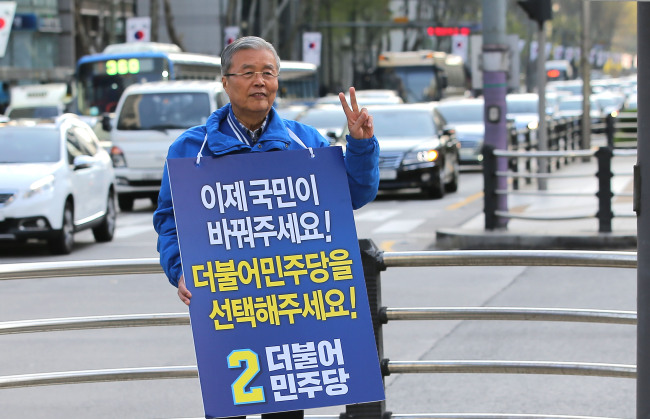 The Minjoo Party of Korea chief Kim Chong-in urges voters to cast their ballot wearing a picket on a street in Seonneung, southern Seoul, on Monday. (Yonhap)
The Saenuri’s Kim started off his day in Ulsan, an industrial city in the conservative southeastern corner of Korea.

“Someone who used to belong to the unconstitutional Unified Progressive Party should not be elected as representative,” Kim said in Ulsan’s Dong-gu constituency, while stumping for party candidate Ahn Hyo-dae.

He thus fired directly at independent candidate Kim Jong-hoon, who rivals Ahn in the area.

The far-left minority UPP was disbanded back in 2014 after being defined by the Constitutional Court as an unconstitutional political unity based on National Security Law.

“The Minjoo Party contributed to the infiltration of pro-North figures into the National Assembly by uniting with the UPP back in the 2012 general elections,” Kim said Sunday during his Seoul campaigning tour.

“Moon, who has never apologized for the consequences, is once again plotting to ally with pro-communist cliques.”

“Homosexuality is an outrage against humanity, yet candidate Nam is seeking to pass a bill to allow such disorderly actions within the Army,” Kim claimed.

The opposition lawmaker had motioned a revised military criminal law in 2013, expanding the scope of what is considered rape in the army from “women” to “people,” stating that men could also be victims of sex crimes.

According to the revised article, consensual homosexual relationships may no longer be punished by the military court.

The main opposition party, whose motto is to judge the economic misadministration of the current government, chose to reiterate what they branded as “the greater cause.”

“A powerful opposition party is absolutely necessary in order to stop the monopolizing ruling party from disregarding and mocking the people,” said Minjoo chief Kim in a speech to the nation on Monday.

“This year’s parliamentary election is all about judging the errors of the Saenuri Party and of the Park Geun-hye government.”

Kim also stayed largely aloof amid attacks on his affluent assets, following news reports over the weekend in which the ruling party cited his wealth as a contradiction for opposition leader who speaks of economic democratization and distribution of wealth.

“The ruling party should be ashamed of its false, fault-finding propaganda,” said the party’s spokesperson Kim Sung-soo.

Both Kims headed to Jejudo Island later in the afternoon to canvass the self-governing province which has three legislative seats.

Jejudo is the place of the 1948 April 3 movement, in which numerous civilians were killed while fighting against the military rule. Considered a longtime opposition stronghold, the island has voted in Minjoo lawmakers with landslide majorities for the past 12 years.

But this year, the ruling party is eyeing a possible victory, as two of the three constituencies are caught in neck-and-neck races within the margin of error, reflecting a split in opposition votes due to the newborn centrist minority People’s Party. 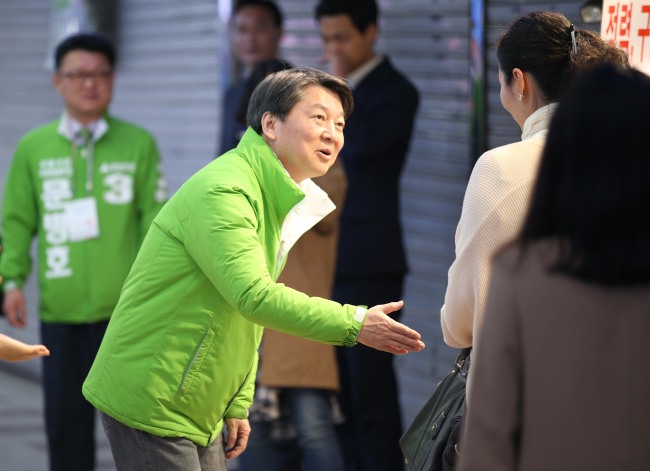 “There will be no real solution to anything as long as the No. 1 and No. 2 parties keep on brawling.”

While parties geared up with their last-minute sprint, the presidential house once again came under fire for making regional trips amid election campaigns.

Cheong Wa Dae claimed that the trip was a “economic action short of political intentions” to review the achievements of state-backed organizations, but opposition parties blasted upon the president’s “timely” schedule as an obvious to exert her influence.