[ The Korea Herald – Send E-mail ]
Ministry under fire for alleged lax security cover-up
By Kim Da-sol
Published : Apr 10, 2016 - 16:33
Updated : Apr 10, 2016 - 19:17
The Central Government Complex in downtown Seoul, which recently came under fire for allowing a civilian break-in due to lax security, is facing further backlash as the government allegedly destroyed related evidence and covered up the disgraceful incident.

According to police authorities, passwords written on a wall -- which a 26-year-old civil servant aspirant used to sneak into the office -- were apparently erased by an official from the Ministry of Personnel Management after the police launched an investigation. 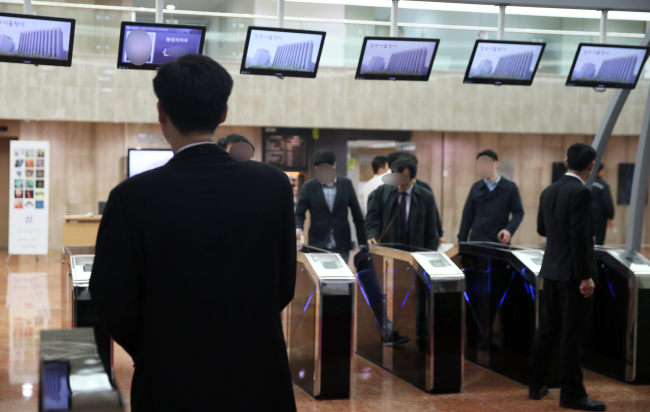 A security team member stands guard by the ID pass reader on the first floor of the Central Government Complex in central Seoul on Wednesday. (Yonhap)
“We could not leave the evidence as it is, since many were already aware of the fact (that he used passwords written on a wall),” a ministry official was quoted as saying.

According to local media, the corresponding ministry had previously claimed to have abided by the security guidelines in the wake of the incident, but later changed its words and said the given instructions were not related to security maintenance.

The Interior Ministry, in charge of supervising administration affairs in general, refrained from commenting, citing the “sensitivity of the issue.”

Amid stacking security controversies, the Personnel Management Ministry on Sunday relocated itself to the administrative city of Sejong, in the central Chungcheong region.

But security concerns persisted as the building’s lowest five floors were occupied by restaurants, hospitals and banks, while the ministry offices took the sixth to 12th floors.

The ministry official claimed the relocation into a nonexclusive private building was inevitable, citing the lack of space within the government complex.

According to the National Agency for Administrative City Construction, the ministry’s new building was given temporary approval for use, given such circumstances. The government-led inspection regarding information and communications security has not yet taken place.

Meanwhile, the National Police Agency‘s recent probe showed that the intruder in question, identified by the surname Song, had admitted to stealing additional exam papers and answer sheets from a private institute. He reportedly intended to use the stolen data to score high in the first round of the Grade 7 civil servant exam.

Officials tentatively concluded that Song did not have an insider accomplice.