[ The Korea Herald – Send E-mail ]
Probe digs into disinfectant-maker's report
By Kim Da-sol
Published : Apr 4, 2016 - 16:59
Updated : Apr 4, 2016 - 17:32
Seoul Central District Prosecutor’s Office will investigate the safety data sheet of Oxy Reckitt Benckiser, one of the toxic humidifier disinfectant makers blamed for the loss of 140 lives, on suspicions that it has fabricated the document.

According to the special probe team, the prosecution summoned last week analysts from Seoul National University and Hoseo University -- who created Oxy humidifier disinfectant’s safety data sheet -- to investigate whether they manipulated the test results. 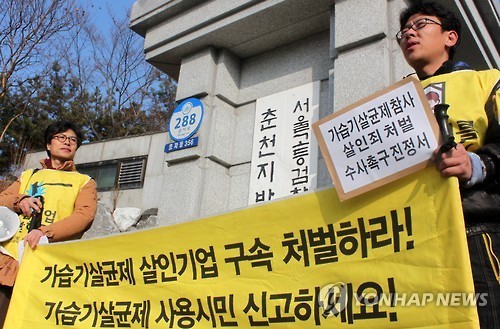 Family members of victims of toxic humidifier disinfectants hold a press conference in front of the Chuncheon District Prosecutors’ Office, demanding for a probe and the punishment of manufacturers and sellers on Dec. 22, 2015. (Yonhap)
In 2011, household product manufacturer Oxy Reckitt Benckiser submitted test results to prove its product has no links to lung damage. It was submitted to the prosecution after it was reviewed by their legal counsel.

The submission came after the Korea Centers for Disease Control and Prevention’s safety report released earlier the same year that said Oxy’s products include toxic amounts of chemicals such as PHMG and PGH.