Frankly, they prefer a slow-moving roll, fueled by bacon ravioli, glazed Brussels sprouts and trendy cocktails. As for appropriate gear, a dress and high-heeled boots will do just fine.

“I was a little bit scared, because I’m not the most coordinated person,” said Nicole Khalife of New York, who, along with her friend Mary Kenney of Chicago, signed up for a foodie bike tour during a March trip to Austin.

After a quick instructional on how to use the candy-colored Pedego electric bikes (press the red button to turn it on; twist the throttle to get an electric boost; pedal if you’d rather use your own muscle), and a few minutes of practice behind Rocket Electrics bike shop, Khalife rolled down the boardwalk. 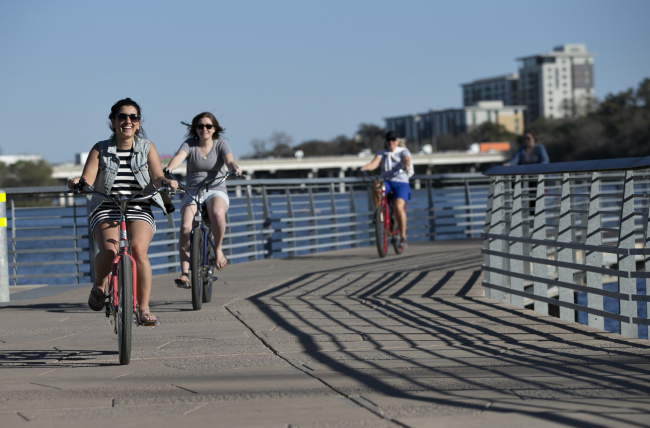 Participants, including Nicole Khalife, left, cycle across the boardwalk during the Rocket Electrics Foodie Tour on March 3 in Austin, Texas. The group, led by Leslie Luciano, biked between four different restaurants and bars. (Austin American-Statesman/TNS)
In all, six cyclists followed tour guide Leslie Luciano on the mostly flat and easy ride to four bars and restaurants around the city. Two others dropped out after one took a spill and hurt her knee early in the excursion.

“We’ll stick to trails and high-comfort roads,” Luciano announced as the group crossed the river at the First Street Bridge, then stopped in front of the Bonneville, a sleek bistro tucked behind a row of trees on West Cesar Chavez Street.

The riders parked out front, then settled in at a table reserved for them. They nibbled salt cod fritters, ravioli filled with creamy bacon and two kinds of thin-crust pizza. Forty-five minutes later, they pushed off again, heading east down the Ann and Roy Butler Hike and Bike Trail at Lady Bird Lake. 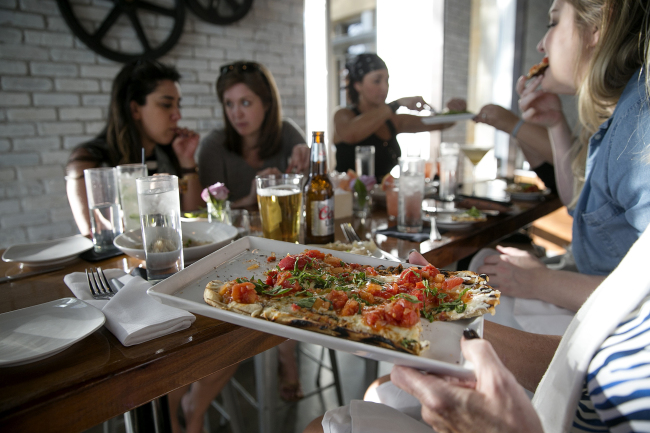 Nicole Khalife, Mary Kenney, Julie Vaden and Jennifer Walton eat at Bonneville during the Rocket Electrics Foodie Tour on March 3 in Austin, Texas. The group, led by Leslie Luciano, biked between four different restaurants and bars. (Austin American-Statesman/TNS)
“The trade secret is restaurants,” Luciano said. She wouldn’t reveal them all, but said she works from a list of about 15 eateries, all locally sourced and organic, choosing destinations based on the cyclists’ food allergies and preferences. “There’s never a tour that’s exactly the same. We figure it out as we go.”

Tours start at 4 p.m. to take advantage of happy hour prices. But there’s an ulterior motive, too: Show customers that electric bikes offer a healthy and easy way to get around the city. Riders can get as much exercise as they want, but a small electric motor takes the work out of hills. That makes riding in Austin a breeze, especially during hot summer months.

“You can talk all you want about electric bikes, but until you get on one …,” Luciano said. 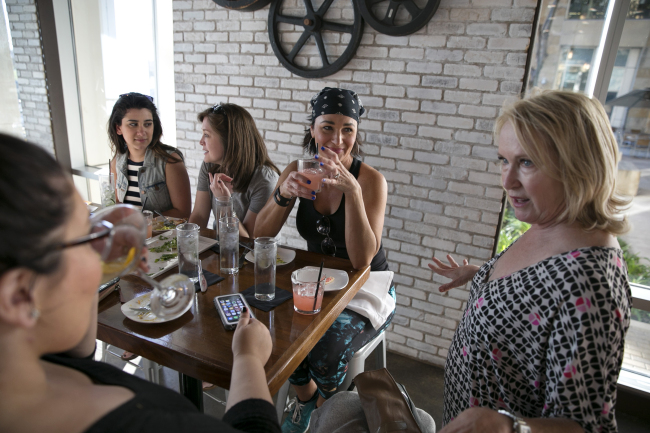 From left: Nicole Khalife, left, Mary Kenney, Julie Vaden and Leslie Luciano talk while eating at Bonneville during the Rocket Electrics Foodie Tour on March 3 in Austin, Texas. The group, led by Leslie Luciano, biked between four different restaurants and bars. (Austin American-Statesman/TNS)
The pitch may have encouraged at least one member of this group to spend more time on a bicycle. “It’s kind of given me motivation to get in shape,” said Clarissa Lafirst, of Ocala, Fla.

Lafirst and Julie Vaden scheduled a tour so they could stay active during a trip to Austin for a small book fair. “I love food, and I just thought the exercise was a bonus,” Vaden said. “I like adventure.”

The group paused periodically to snap pictures or learn a little about the city’s history from Luciano. Then they pointed their handlebars toward hip and highly rated Launderette on Holly Street, where diners gawked a little as the cyclists lined up their red, blue, orange and yellow cruisers in front of the patio.

“This is only our second stop,” Luciano warned as the bikers sampled house-made potato chips, roasted cauliflower, okra and something called soft egg toast, made with asparagus, truffle vinaigrette and focaccia.

“I love it,” said Ruth Watton of Atlanta. “It’s the best of both worlds.”

She met her daughter, Jennifer Watton of Vancouver, in Austin after Jennifer landed a job interview in Texas. “I like that you still get exercise when you ride it and a little boost on the hills,” Jennifer Watton said.

Then the cyclists headed to Whisler’s, a picturesque old stone building on East Sixth Street, where they settled in at a picnic table under the stars. A waiter dropped off orders of crusty grilled bread and peanut sauce, pickled cabbage and some of the fieriest beef panang curry in Austin.

Which led Luciano to unveil her final trick: a cooling stop at Gelateria Gemelli, where the menu features exotic flavors of gelato, including olive oil, Earl Grey and pineapple mint, and coffee.

No energy bar or sports drink can compete with that.

If you go: Rocket Electrics, 1608 E. Riverside Drive, offers themed electric bike tours around Austin. Cost for a four-hour foodie tour starts at $88 per person and includes bike rental, food and restaurant tips. Drinks are extra. For more information, call 512-442-2453 or go to rocketelectrics.com. Participants must be 16 and able to confidently ride a bicycle. (Tribune Content Agency)