Their gathering appeared to resemble a friendly reunion of old friends as they addressed one another by their first names or terms of endearment such as “brother” and “sister.” They were supporters of President Park Geun-hye and the ruling Saenuri Party that had volunteered to celebrate the party’s election campaign launch on Wednesday.

“Saenuri Party is the heart of the conservative value, isn’t it?” Rep. Cho Won-jin, the second-term lawmaker running in Dalseo district in the city, said to the supporters in a heavy Daegu accent.

“If we lose Daegu, it is not just a defeat of the Saenuri Party. It is a defeat to the Republic of Korea and its liberal democracy,” he said. 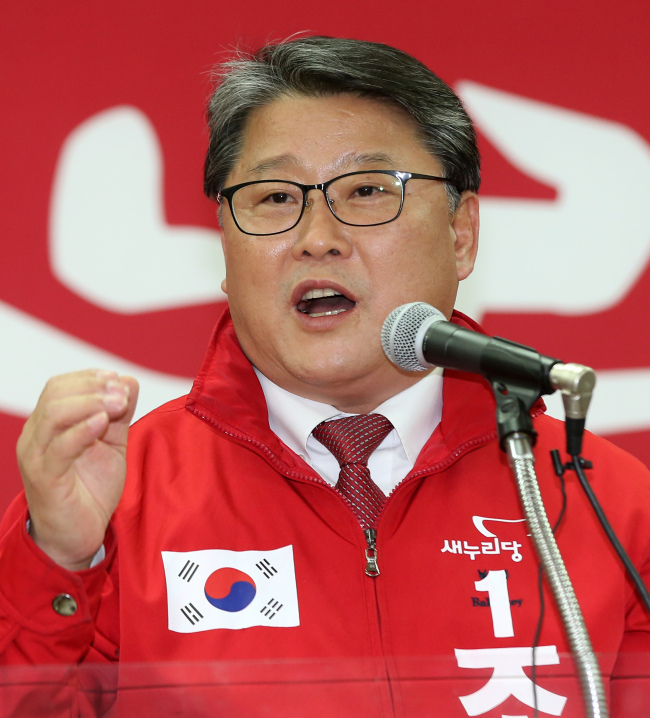 Rep. Cho Won-jin gives speech to his supporters at the Saenuri Party`s Daegu office. Yonhap.
The two-hour event, packed with Saenuri bigwigs and fervent supporters who punctuated the occasion with resounding applause and cheers, represented a snapshot of the conservative party’s stronghold. It is the political hometown of President Park and her father late President Park Chung-hee.

Being elected as a lawmaker first in Dalseong district of Daegu in 1998, the female president began her political career aided by strong supports of Daegu residents. Her popularity culminated in the 2012 presidential elections where almost 80 percent of Daegu voters cast their ballots for the daughter of the late president, who also spent most of his earlier life in Daegu.

The city's strong conservativsm is featured in the breakdown of its representatives in the National Assembly and the municipal parliament. All of the lawmakers representing the region at the 19th Assembly and the city’s municipalities are Saenuri members – making the city the only region that has a legislative body monopolized by a single party.

“I don’t know about politics and I think all politicians are basically thieves. But, if I have to choose one among those thieves, I will definitely choose a thief from our town,” a 40-year-old man, who runs a sushi restaurant at Pyeonghwa commercial district downtown of the city, told The Korea Herald.

Another resident offered more specific rationale to his support for the ruling party. A 50-year-old pharmacist running his business for more than 30 years in the city said that he would support the Saenuri Party to help Park avoid lame-duck presidency and allocate more budgets to boost the city’s faltering economy.

One of the candidates seeking to leverage such sentiment was Chung Jong-sup. The former interior minister runs in Dong-gu A district to compete with Rep. Yoo Sung-kull, a former Saenuri lawmaker who left the party in protest against his nomination drop. 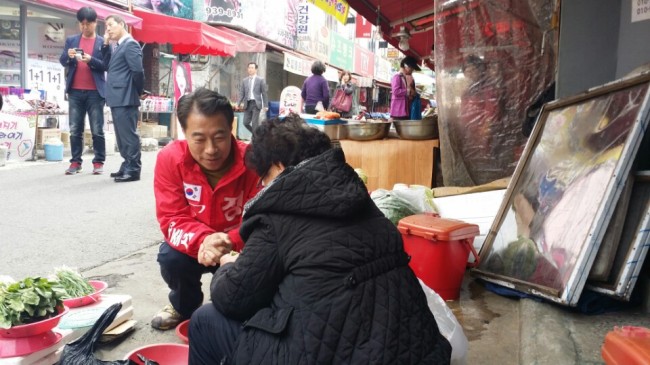 Saenuri’s Chong Jong-sup talks to a seller at a market on his campaign trail in Daegu. Yeo Jun-suk/The Korea Herald
“If you photocopied President Park, I would be what you’d get,” said Chung in an interview with The Korea Herald. “I believe that the president and I see eye-to-eye on the philosophy to govern the nation. In that sense, I am a perfect fit because I have spearheaded the tasks as a cabinet member,” he said.

Such enthusiastic loyalty had put Chung on a hot seat. Last year, the former minister was accused by the main opposition party of violating election laws when proposing a toast in favor of the Saenuri Party. One of his ministry’s tasks was to oversee fair parliamentary elections

However, Chung and his aides did not bother to dispel such an image on the campaign trail. Instead of elaborating on election pledges and policy agendas, they chanted "pick the candidate listed number one” to the voters who hold strong allegiance to the conservative party being allocated a top spot at the ballot.

But Chung’s strategy appears to face an exceptional challenge: contesting against his former colleagues who have left the Saenuri Party in the wake of the party’s infamous factional strife. Of the 11 defectors, four were incumbent lawmaker in Daegu, and all of them seek reelection bids as independents. 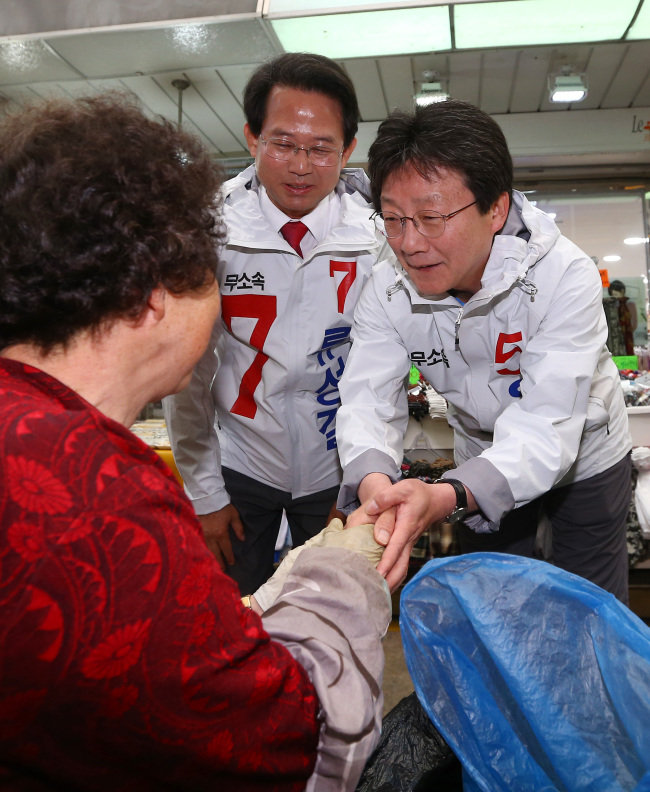 Independent runner Yoo Seong-min shakes hands with citizens in Daegu. (Yonhap)
Spearheading the group is Rep. Yoo Seong-min. The former whip quit the party months after President Park displayed disapproval toward him for objecting to her policy initiatives. The conservative party dropped him from the nomination list last month, claiming that Yoo’s political stance clashes with its identity.

“The Saenuri Party used to boast a wide spectrum of ideologies (from far-rights to moderates),” said Yoo in an interview with The Korea Herald. “But that spectrum has become too narrow over a short period of time. I will help those being excluded from the nomination and discuss election strategies among us,” said Yoo.

What could help the Daegu native’s case for reelection is the region’s worsening economy. The former economics professor said in a media interview that he was the right choice to steer the city in the right direction after President Park finishes her term in 2017.

One of the economic hurdles facing the city, once home to Korea’s textile industry in the 1980s, is lack of job opportunities for young people. According to the 2015 statistics from Daegu Gyeongbuk Development Institute, the city’s youth unemployment was 11.4 percent, the third biggest employment rate nationwide.

“There are no big companies or conglomerates in Daegu. The most lucrative option for young people is working at local Daegu banks,” said Jang Wang-ki, the 48-year-old man who has run an auto repair shop for 23 years in the downtown of the city.

“If the Saenuri Party keeps nominating politicians who don’t have any association with the region, then the city’s economy will pay the price,”, said Jang, referring to the candidate Chung, who he said came to the city just a month ago. 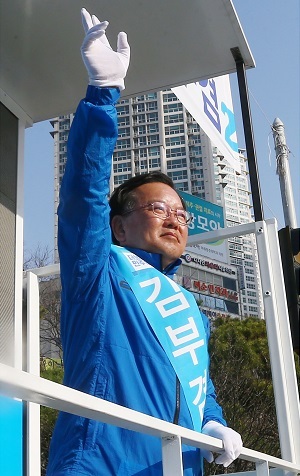 The Minjoo Party’s Kim Boo-kyum waves to citizens in Daegu. (Yonhap)
With most of the city’s constituents divided between the Saenuri candidates and the party defectors, one lawmaker from the main opposition The Minjoo Party of Korea aims to crack the duopoly by offering alternatives to the voters.

He is Rep. Kim Boo-kyum. Having been defeated by conservative candidates by a narrow margin in the 2012 parliamentary elections and 2014 race to choose the city’s mayor, the third-term lawmaker is the only liberal candidate ahead of the Saenuri candidate in opinion polls in the constituency.

In a survey conducted by local pollster Realmeter, The Minjoo Party’s third-term lawmakers enjoyed a hefty lead over his counterpart Kim Moon-soo, the former governor of Gyeonggi Province, with 52.7 percent to his 38.2 percent in the Suseong A district.

“While citizens of Daegu may have strong patriotism and allegiance to the president, they are undoubtedly outraged at the way the local (economy) is headed. I am committed to breaking the nation’s deep-rooted regionalism” said the Minjoo Party candidate said in an interview with The Korea Herald.

South Korea will elect new National Assembly members in a general election on April 13. The Korea Herald is publishing a series of articles on candidate agendas, election trends and notable runners leading up to the race. This is the 13th installment. -Ed