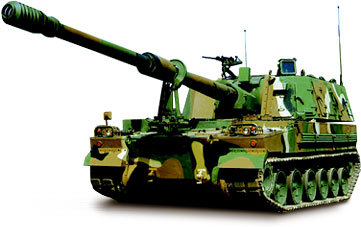 This was because, as industry sources argued, Hanwha Techwin was the only defense company with the financial clout to take over Doosan DST, whose enterprise multiple stood at 12 times. Techwin offered some $600 million for a 100 percent stake in DST.

Techwin’s close competitor was LIG Nex1, which develops guided missile systems, but the market had predicted that LIG did not have a fighting chance as the company did not have sufficient cash in its war chest. 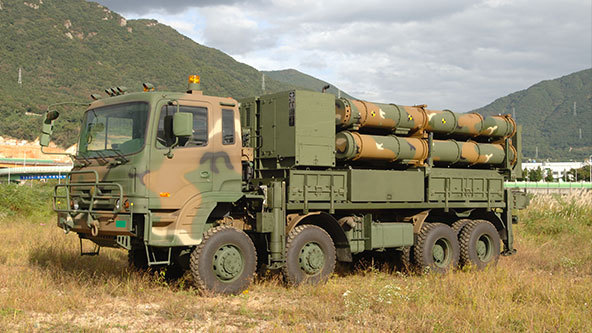 Doosan DST's land-based launcher (Doosan DST)
Also, given that DST’s other shareholders included Doosan Group’s private equity partners -- IMM and Mirae Asset, which already redeemed their investments in DST through dividends and bonuses -- it was highly unlikely that DST was going to be sold again to private equity funds.

So as expected by the market with these possible scenarios, Hanwha Techwin has won the first round of the bidding game. And it still needs to further negotiate with regards to the acquisition price and recheck unlisted DST’s books, including cash flow, income and the balance sheet.

If nothing happens -- like Hanwha Techwin discovers odd business patterns from DST books or the parties fail to agree on the final price -- until the two sides sign the acquisition contract by the end of next month, the market, for now, is viewing this deal as a “win-win” for both Hanwha and Doosan.

Hanwha Corp’s Techwin, which is expected to finance the DST acquisition with proceeds from the sale of its stakes in Korea Aerospace Industries and Hanwha General Chemical, will end up expanding its defense portfolio especially its guided weapon system business.

“This deal will help spur Hanwha’s value chain in guided weapon systems and put it in the game with LIG Nex1, which has dominated in the business,” said Lee Sang-woo, an analyst at Eugene Investment & Securities in his analysis report.

Doosan, meanwhile, will secure the liquidity it needs to make sure its core infrastructure business stays afloat, following its leverage buyout of Bobcat and the global slowdown in the construction industry.

Techwin’s parent Hanwha Corp. and DST share some business in missile launchers, with DST providing the launchers to Hanwha’s multiple rocket launchers. This partnership already makes them synergistic. Furthermore, Techwin develops self-propelled artillery, and engines and parts for T-50 jet trainers and helicopters, with which the company can use DST technology to not only further enhance their combat capability and readiness, but also boost their margins.

“The defense market is either run by a monopolistic or oligopolistic system where players can earn stable margins,” said William Park, an analyst at Daewoo Securities.