[ The Korea Herald – Send E-mail ]
Koreans becoming more prone to rage
Offense, crime against strangers linked to childhood, hierarchal culture: experts
By Claire Lee
Published : Mar 30, 2016 - 17:49
Updated : Mar 30, 2016 - 21:08
Kim Myung-hun (not his real name), a 29-year-old worker at one of South Korea’s biggest home shopping channels, was stunned last month when his female colleague was threatened to be killed by one of her customers over the phone.

“It was late at night, and the customer was drunk. He wanted to exchange a purchase,” Kim said.

“When my colleague said she could not help him unless he told her his name, he all of a sudden started screaming and cursing. He eventually said, ‘I know where you are right now, and I’m going to kill you.’ We ended up calling the police.”

According to Kim, customer calls that involve cursing, screaming and threats have increased by about three times at his company in the last two years. He did not give his real name as talking to the media about work is prohibited by his employer. 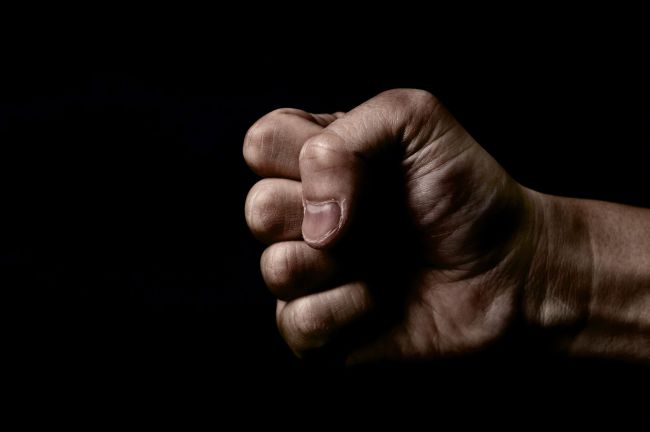 123rf.
Such rise in aggressive behavior against strangers can also be seen in the prevalent cases of violent crimes committed out of impulse.

Between 2011 and 2014, impulsive crimes made up more than 40 percent of all violent crimes in the country, raising concerns about public mental health and safety.

According to research last year by the Korean Association of Psychiatric Practitioners, about 50 percent of Korean adults have experienced symptoms of impulse control disorder at least once, and about 10 percent of them needed treatment.

In 2011, a man in his 40s, whose wife had left him after having an extra-marital affair, murdered a female pedestrian. The man told the police that he had killed her because it made him angry that the victim’s appearance resembled that of his wife who had run away from home years ago.

Detective Kwon Il-yong from the National Police Agency said the case belongs to the kind of violence that is caused by accumulated despair, social isolation or helplessness. Such cases mostly target random individuals -- such as strangers on the street or those working in customer service -- and are therefore more dangerous and unpredictable.

Such anger-related crimes can take the form of violent attacks against neighbors over noise complaints and accidents involving road rage.

“We also found that many offenders of impulsive violent crimes tend to have obsessive behaviors as well as anxiety disorders. Some of them also have narcissistic tendencies,” the detective said.

A 27-year-old hotelier, who declined to be named, said she has witnessed countless narcissistic individuals among customers who complain violently and make “absurd” demands.

For instance, a hotel guest, a woman in her 20s, once asked her to let three of her friends use the hotel’s swimming pool for free. When the hotelier told her that this was not allowed, the guest started crying hysterically and screaming loudly. The woman shouted at her in the lobby, saying, “Why are you trying to ruin my birthday? Who do you think you are?”

The psychologist said those with impulse control disorder are likely to have been raised by parents who did not allow them to freely voice their objections and negative feelings at home.

“When a child’s negative emotions are not accepted and acknowledged by the parents, he or she starts to believe that in order to make it clear that they are unhappy with something, they have to be vocal and loud about it. The kid doesn’t learn how to complain or disagree with someone without getting angry. And this is something many adult Koreans don’t know how to do.”

Culture critic Lee Moon-won said the high prevalence rate of impulse control disorder is partly linked to the nation’s hierarchal culture in which people engage in relationships at work and in families in strict accordance to one’s age, power and position.

“Since you can’t directly complain to your boss or someone who is older in your family, you vent your anger on someone you don’t know, or someone who you think can’t fight back,” Moon said. “That’s why those in the service sector are the most vulnerable to verbal abuse, because many Koreans think customers are the boss-equivalent of those who greet them at shops, restaurants and other businesses.”

Psychiatrist Ahn Yong-min from Seoul National University Hospital in Seoul said one’s failure to resist an urge to express anger should be understood as more than just a selfish and violent act.

“The person with the condition is more likely feeling a lot of negative emotions, such as sadness and anxiety,” he said. “Expressing anger is their way of escaping such negative feelings inside. The key is to tackle such negative feelings, and encourage those who have anger issues to seek professional help, as the mental condition can easily turn into violent behaviors.”

South Korea has a special term for the symptoms of suppressed anger that can eventually lead to physical discomfort or illness: “hwabyeong.” The condition is known to arise when people are unable to confront anger stemming from situations which they perceive to be unjust. Symptoms including tightness in the chest, insomnia and chest pains.

The website defines this as “a mental state typically exhibited by a Korean who is extremely displeased. This condition is signified by gratuitous violence accompanied by psychotic shrieking. Surrounding people and or objects are usually left injured or damaged.”

Culture critic Lee said hwabyeong has its roots in the feudal Korean kingdom that lasted from 1392 to 1897, as its strict class hierarchy and patriarchy offered no social mobility.

It seems as if present-day Korea is beginning to resemble the feudal kingdom when it comes to social mobility. According to data by Statistics Korea, only 20 percent of the Korean population feels that achieving a higher socioeconomic status is possible by one’s own efforts.

The 27-year-old hotelier said dealing with angry guests often gets her riled.

“I feel like it’s an injustice to myself,” she said. “I always have to say sorry even when it’s the guest who is making an unreasonable request or complaint. But I’ve been told to be thankful because at least I have a job when there are so many young people who can’t even pay the bills.”