The four cast members of “Youth Over Flowers - Africa” ended their nine-day trip from Namibia to the Zambia-Zimbabwe border in the last episode of the star reality travel program Friday.

The four cast members from the tvN drama “Reply 1988” -- Ryu Jun-yeol, Park Bo-gum, Ahn Jae-hong and Go Kyung-pyo -- marked the end of their 3,800-kilometer cross-border trip by bungee jumping from the 111-meter tall Victoria Falls Bridge. The trip began in Windhoek, the capital of Namibia, and stopped at major Namibian tourist destinations in Sossusvlei, Swakopmund and Etosha National Park before reaching Victoria Falls, near the country’s eastern tip. 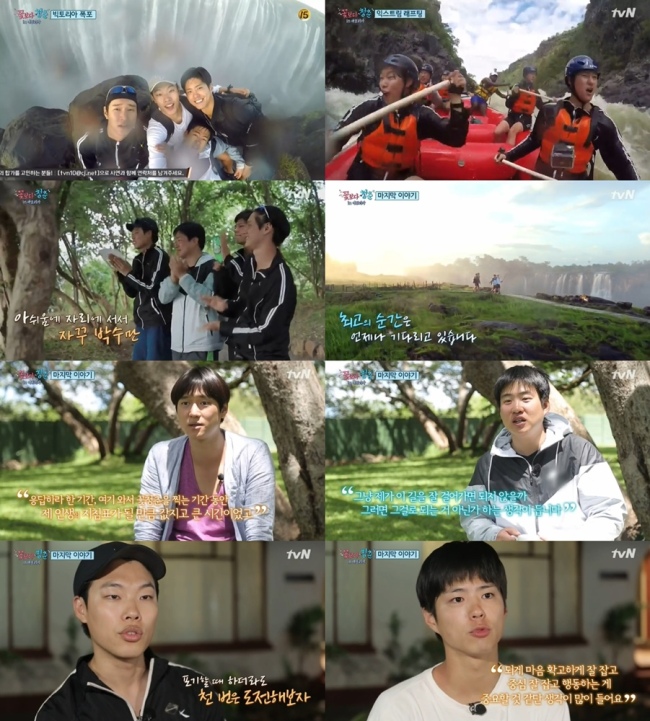 Scenes from “Youth Over Flowers - Africa” (tvN)
“All the hardships we went through during the long trip instantly melted away when we saw the falls,” Park Bo-gum said on the show.

The last episode of “Youth Over Flowers - Africa” was the most-watched cable show on Friday night, with average viewership of 6.3 percent. The director’s special edition of the program will air on April 1 at 9:45 p.m. on tvN, featuring four cast members looking back on their Africa trip in Seoul.