[ The Korea Herald – Send E-mail ]
[Weekender] Korea needs big players for space expedition
Lack of interest by Chaebol a major setback for Korea‘s aerospace industry
By Kim Young-won
Published : Mar 25, 2016 - 13:28
Updated : Mar 25, 2016 - 18:48
A race to conquer space has been heating up with more billionaires and entrepreneurs around the world betting big on commercial space businesses such as space travel and cargo delivery to space stations.

Korea, as a late-starter, succeeded in launching a rocket in 2013. However, the country has been struggling to make its way into the top echelon of the world’s space sector due to its lack of talents, experience and investment. 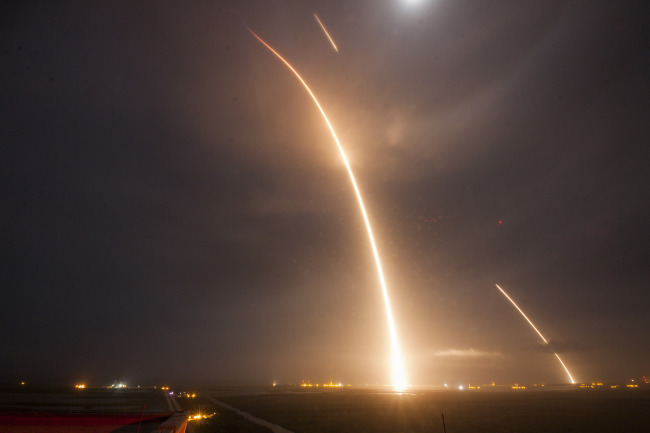 Long exposure of the launch, reentry and landing of U.S. space firm SpaceX’s Falcon 9. (SpaceX)
Many critics also point to the near absence of Korean conglomerates in the domestic aerospace scene as a major setback for the nation.

“Since space businesses do not generate short-term revenues, most Korean conglomerates are reluctant to jump into the sector,” said an official from the aerospace sector.

“Other nations, including the U.S. and Russia, on the other hand, have been running space programs for decades and have a large pool of seasoned engineers and talents, which is why the Korean aerospace industry is far behind in the race for outer space,” he said.

Samsung Group sold part of Techwin’s flight engines business to Korea Aerospace Industries in 1999 and pulled completely out of the aerospace sector in 2014.

Hanhwa Techwin, the arms business unit of Hanhwa Group, is one of few big aerospace companies run by a conglomerate in Korea.

Some other players in aerospace here include Korea Air, Korea Aerospace Industries and LIG Nex1, but their activities are less exciting compared to their U.S. counterparts.

Those who aim for the sky (and beyond) include Tesla and SpaceX CEO Elon Musk, Amazon and Blue Origin CEO Jeff Bezos and Paul Allen, the Stratolaunch Systems CEO and co-founder of Microsoft. 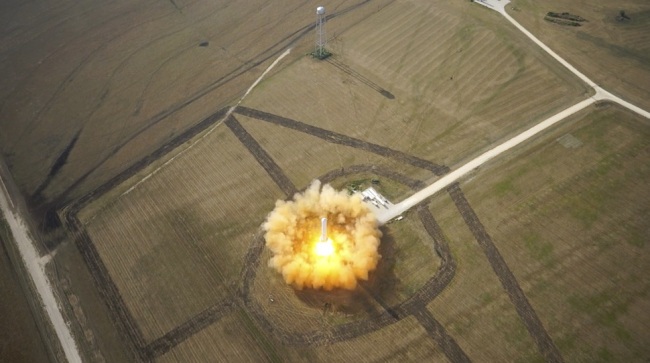 U.S. space firm Space X’s reusable rocket Grasshopper. (SpaceX)
Since the U.S. government has given more leeway to private companies engaging in space business, lifting off regulations and providing benefits, some entrepreneurs have established their own companies to develop spacecraft while others have invested a massive amount of money in aerospace technology companies.

They may just be hoping to make their childhood dreams reality, or they could be seeing a real business opportunity in the hitherto relatively untapped outer space.

Whichever it may be, they have enlivened the world’s space scene like not seen since the U.S.’ first moon landing in 1969.

Established in 2002, SpaceX has been at the center of media frenzy in recent years with a series of space projects, including launching its spacecraft Dragon and reusable rocket Falcon 9, which can land safely back on earth. In partnership with NASA, the private firm has been delivering supplies to the International Space Station.

Blue Origin, however, stole the show by successfully launching and landing the New Shepard rocket for the second time earlier this year, according to the U.S. space venture.

The successful vertical landing was considered a great step forward in the aerospace segment as it allows the reuse of a space rocket.


“I’m a huge fan of rocket-powered vertical landing,” Bezos wrote on the website of the private space venture. “To achieve our vision of millions of people living and working in space, we will need to build very large rocket boosters. And the vertical landing (system) scales extraordinarily well.”

SpaceX spent around $1 billion from 2002 and 2012 -- less than a tenth of Samsung Electronics’ research and development spending last year of $11.7 billion -- while the Amazon CEO poured $500 million into his space venture before the launch of the rocket able to land vertically.