But there was no single citizen who picked up the bills, with many of passersby glancing at the grass covered by banknotes and taking photos of the scene, police said. 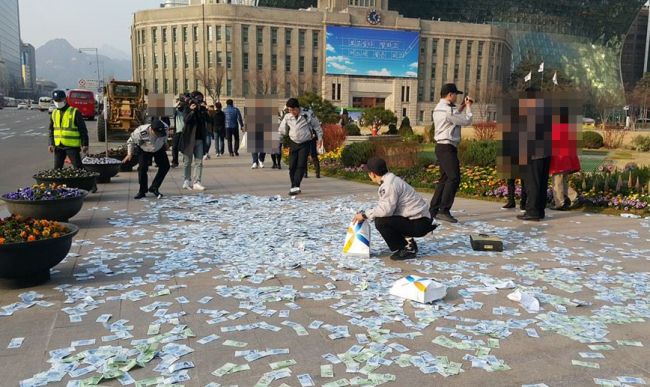 Police collect the banknotes scattered on the street in downtown Seoul on Monday. (Yonhap)
Police said that picking up unattended money can be punished by law on charges of theft. But in this case, the women had intended to give up her rights to the money, so there was no legal basis to punish those who gathered the bills.

During the questioning at a nearby police box, she allegedly said that she was afraid of her ex-husband and son trying to take her money and would rather donate the money to anyone on the street.

The police probe found that she had withdrawn 42 million won in cash from a local bank in Seoul a few days earlier. She arrived in the Seoul Square by taxi and hired a private guard to escort her with a paper bag full of the banknotes.

She was neither under threat from her family nor in need of police protection, according to police.