[ The Korea Herald – Send E-mail ]
Asylum seekers trapped in long refugee process
By Ock Hyun-ju
Published : Mar 20, 2016 - 17:29
Updated : Mar 21, 2016 - 11:35
With the risks and challenges faced by refugees around the world having become one of the biggest global issues of today, the status and conditions of asylum seekers in South Korea have also been highlighted. The Korea Herald is publishing a series of articles shedding light on refugees in Korea, their hardships, the systematic fallout and ways to go forward. This is the ninth installment. – Ed.

For Milene (not her real name), a 25-year-old asylum seeker from a small country in West Africa, life has very little to offer. She waits each day for the result of her refugee application and seeks ways, if any, to somehow survive.

Back home, Milene had to escape her homeland as her family had beat her and forced her into prostitution. She came to Korea in 2012 to work as a dancer at the African Art Museum in Pocheon, Gyeonggi Province, but she had to flee again due to the punishing hours in return for a third of the minimum wage.

“The situation was unbearable. I worked day and night, but received only 400,000 per month. I injured my legs after falling on a slippery floor, but I had to keep dancing because my boss threatened to send me back to my country,” the French speaker told The Korea Herald.

She then worked illegally at a factory in Ilsan, Gyeonggi Province, for two years. She simply did not know what to do to avoid going back to her country. It was then that she came to know that she could claim asylum and applied for it in 2013.

But for the past three years, she has been rejected twice by the Justice Ministry. Her case is pending in court. Her prospects of winning refugee status seem bleak, her lawyer Go Ji-woon said.

“I think Milene should be recognized as a refugee. Her society put her life in danger, but her own government could not protect her,” she said. “But it might not be easy for her to receive refugee status because the Justice Ministry and the court tend to suspect applicants’ motives when they have experience of illegally working and residing here.” 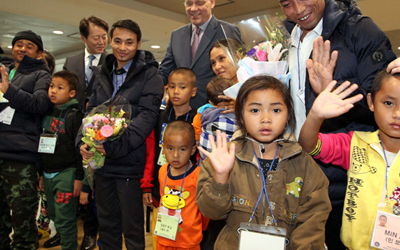 Burmese refugee children in Korea. Yonhap
Currently, selected asylum seekers are offered monthly living expenses and state-run housing in the first six months upon their application. After this period, all they are granted a work permit that should be renewed every six months.

But the long refugee screening process, which takes up to three years, often leaves asylum seekers with no option other than finding illegal employment to pay for rent and feed themselves. Such illegal acts often dent their chances to secure a refugee status, the lawyer Go said.

“Though the court rejects their request for asylum, viewing their application as an excuse to extend their stay, they are not able to go back home,” said Go, who is currently representing four asylum seekers. “They are then likely to fall into the vicious cycle of working illegally again.”

For Milene, it is a matter of life or death. “It makes me so sad. It is a really big problem and threat for me. I cannot go back to my country. I don’t know what to do. I just want to be free,” she said in tears.

Her only wish is to know the decision on her refugee status so that she can seek other options to stay in Korea or elsewhere far from her country.

Milene is one of 5,442 asylum seekers who have come to Korea in search of a safer future but is now stuck in the long asylum process.

While Europe is struggling with the most severe refugee crisis in decades with millions of people fleeing violence in the Middle East, South Korea also saw a surge in the number of asylum seekers from 1,574 in 2013 to 2,896 in 2014 and 5,711 last year. 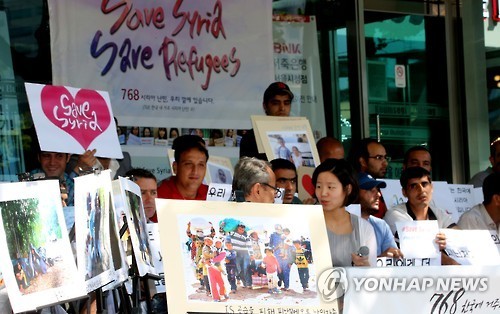 Syrian refugees hold a rally in Seoul, calling for support. (Yonhap)
Activists and lawyers have pointed out that the government’s efforts to distinguish between “genuine” refugees and economic migrants seem to prolong the screening process, which causes further distress to the lives of asylum seekers here.

“For asylum seekers, it is very long, precious three to four years in their lives to prepare for their own future,” Kim Seong-in, head of a refugee advocacy group NANCEN said. “Economic migrants also deserve to lead decent lives as human beings. If the Korean government cannot accept them, it should decide quickly and efficiently so that asylum seekers can find other alternatives.”

The Justice Ministry said that it had trouble processing the growing number of refugee applications and keeping border controls due to a lack of personnel and budget. It added that it takes a long time to review the applications as the country has seen a rising number of migrant workers disguised as asylum seekers to earn money with a legitimate work permit.

Since South Korea started receiving refugee applications in 1994, it has accepted only 576 cases out of a total of 15,250 asylum applications, putting the refugee acceptance rate at 3.7 percent.

Kim Jong-chul, a human rights lawyer for APIL, pointed out that a faster screening process could discourage economic migrants from abusing the law to prolong their stay here.

“If the process quickens, there are less reasons for them to apply for refugee status in the first place,” Kim said. “As any law has its loopholes, the government should devise a plan to curb such abuse cases rather than making the process and asylum seekers’ lives more difficult.”

South Korea joined the U.N. Refugee Convention and Protocol Relating to the Status of Refugees in 1992 and became the first Asian country to enforce the independent Refugee Act in 2013. The U.N. agencies and international community have touted the refugee law as “advanced.”

As South Korea is quite new to accepting refugees, the government and civic groups have wrestled to set their own boundaries in coping with the influx of asylum seekers and refugees, according to Song Young-hoon, a politics professor at Kangwon University.

“The government tends to tighten its grip on managing refugees, while refugee rights groups have some distrust in the government,” Song said. “But it is not practically possible for the government to take control of the inflow of refugees. The role of the government and civic groups should be separated.”

Song suggested that the government should play its part in processing asylum claims while civic groups take care of them in the local community. That way, the refugee screening process can also become quicker.

“The government should lay a groundwork for civic groups to be involved in the early stages and provide them with funds to help refugees settle in the society,” he said.

Refugees are often described as a “burden” in Korean society, but studies have found that, in the long run, welcoming refugees has a positive effect on a host country’s economy and society when they are well integrated.

According to a report by the International Monetary Fund, refugees will add around 0.19 percent of gross domestic product to public expenditure in the European Union in 2016. GDP in the EU as a whole could increase by 0.05 percent, 0.09 percent and 0.13 percent in 2015, 2016 and 2017, respectively.

“Rapid labor market integration is key to reducing the net fiscal cost associated with the current inflow of asylum seekers. Indeed, the sooner the refugees gain employment, the more they will help public finances by paying income tax and social security contributions,” the report said.

Korea’s population is expected to shrink in 2017 and the country will need to take in 605,000 more immigrants by 2020 and 4.27 million more foreign workers by 2030, according to the report. Currently, the number of migrant workers in the nation stands at 1.79 million. 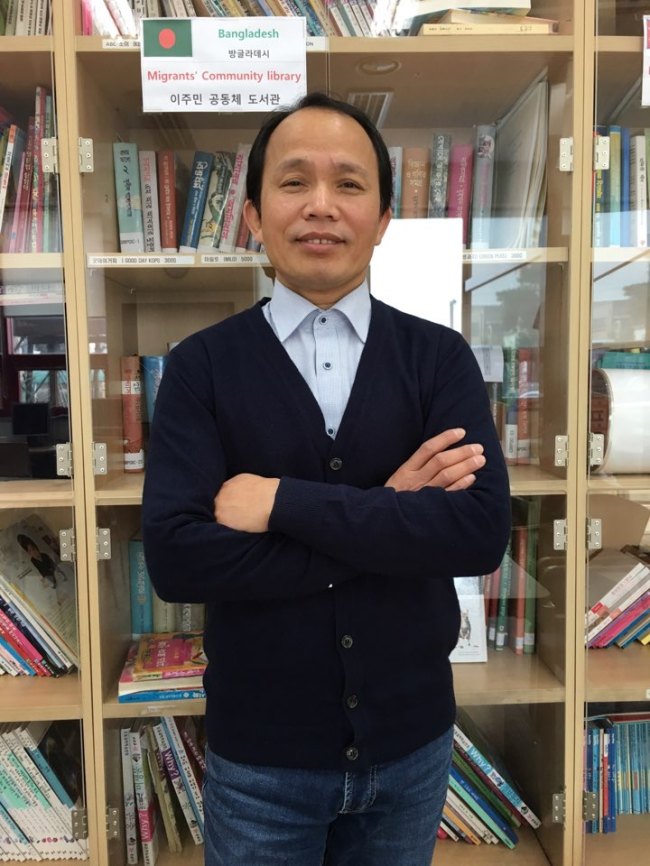 Nani Ronel Chakma (Ock Hyun-ju/The Korea Herald)
Nani Ronel Chakma, one of the first Jumma people to be recognized as a refugee in Korea, said that the key to successfully integrating refugees in Korea is to support them at the grassroots level.

“When asylum seekers are finally granted refugee status, they have difficulties in settling down without financial support from the government,” said Chakma, who earned refugee status in 2004 and now works as a community coordinator at the Gimpo Foreign Citizen Support Center.

“I also had difficulties in enrolling my child at Korean public schools because I was not fluent in Korean and could not get help,” he said of his experience as a refugee supporting his family here. He escaped the Bangladeshi government’s crackdown on his ethnic Jumma tribe.

“It would be very helpful for refugees if the government can offer social benefits like low-interest loans, start-up funds for refugees to open their own businesses in the legal framework,” he said.

“It is a shame that many refugees are educated, but most of them work at factories. If local community centers can provide them with vocational training and help them to make use of their knowledge, expertise and experience, it could be good for Korean society as well.”

Chung Ki-seon, a senior researcher at IOM Migration Research & Training Center, noted that refugees should not be treated as a group in need of help so they can better integrate into society.

“As refugees are traumatized by their experience, there need to be welfare services specializing in refugees such as psychological therapy sessions,” Chung said. “But they should not be branded as a collective group in need of help. Policies for them should be devised within the framework of the entire migration population (to help them become a member of society).”

Despite being aware of the need for better implementation of policies to help refugees, the Justice Ministry argues that the biggest obstacle is the possible public backlash.

“Korean society has low understanding of refugees and policies should keep pace with the public sentiment,” a ministry official said, citing the fierce opposition among Korean residents against the opening of a refugee help center near Incheon International Airport in 2013.

Chakma is aware of the public sentiment toward asylum seekers and refugees, based on his own experience.

“More interaction between Koreans and immigrants is needed. Civic groups can bolster such a communication,” Chakma said, citing as a good example the “Social integration committee for migrants” launched in Incehon this year. Activists, migrant workers and government officials come together through the committee to discuss ways to improve the livelihood of immigrants.

“The situation for asylum seekers and refugees has improved in Korea since the refugee law came into force. It is easier to claim asylum, asylum seekers’ lives became relatively better off and various groups were set up to help those forcibly displaced,” he said. “But there is always room for improvement.”