“The Korean government especially acknowledges that child abuse is an important social issue requiring keen social attention and thus endeavors to strengthen the legal and policy framework,” the minister said at the two-week annual session of the U.N. Commission on the Status of Women.

“The current administration defines sexual assault and domestic violence as social evils and focuses its policy capacity on eradicating such crimes against women. As a result, rates of unapprehended sexual crimes and recidivism rates in sexual violence have dropped to show visible improvement.” 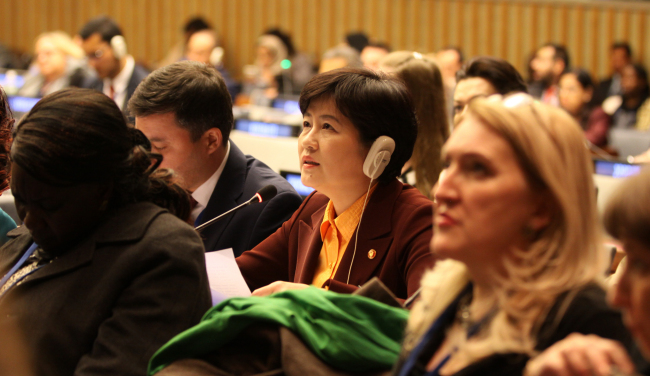 South Korea`s Gender Minister Kang Eun-hee attends a U.N. meeting in New York. Yonhap
While Kang attended the U.N. event as a representative of the South Korean government, the Gender Ministry is currently not officially in charge of policies on children’s rights and preventive policies on violence against minors. While it runs shelters for victims of sexual violence, which also accepts minors, and support programs for school dropouts, the ministry does not offer any programs that are specifically aimed at eradicating physical and emotional abuse of children.

It collaborates with the Welfare Ministry for only one program related to children’s welfare -- education of parents on child care.

“Minister Kang attended the event as a representative of the South Korean government, not the Gender Ministry,” said an official from the ministry. “She decided to speak about child abuse as it is one of the most important issues nowadays.”

While Kang vowed to eradicate violence against children at the U.N. event, a research by Seoul National University, which analyzed this year’s government budget allocated to child abuse prevention programs showed that it in fact was cut by 27 percent from the year before.

The report also showed that there are only 56 state-run child abuse prevention centers nationwide, each institution operated by nine social workers. This means one social worker is responsible for dealing with 18,000 Korean children, the research showed.

South Korea has seen a number of recent child abuse cases prior to Kang’s U.N. visit, including the latest of Shin Won-young, a 7-year-old child who had allegedly been locked up and beaten for three months by his stepmother before his death in February.

The number of child abuse incidents in Korea nearly doubled over the last 10 years. Among the 10,027 confirmed child abusers last year, 8,207 were the victims’ parents.

The number of reported sexual and domestic violence cases have also been steadily rising.