[ The Korea Herald – Send E-mail ]
Unusual problems with Korean public toilets
By Claire Lee
Published : Mar 15, 2016 - 15:38
Updated : Mar 16, 2016 - 14:12
When Jen Kim, a Korean-American in her 20s, went to use a public restroom inside a local cafe franchise in Ilsan two years ago, she couldn’t help but notice a trash can that was overflowing with used toilet paper that emitted an unbearable odor.

“I left the stall immediately, telling myself I would rather hold it in and risk getting a urinary tract syndrome than use that bathroom,” she told The Korea Herald.

On the door of the stall, there was a sign that asked users not to flush toilet paper down the toilet.

This is a common sight in Korea where public restrooms often have such signs, along with waste bins piled high with soiled toilet paper. 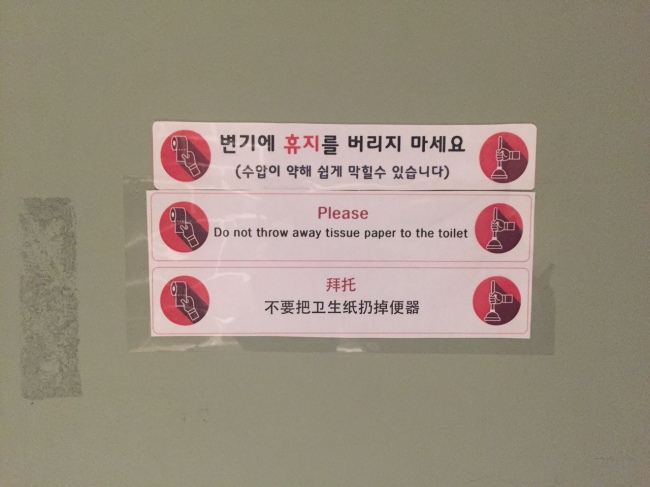 A public bathroom stall in Seoul has a sign that asks users not to flush waste paper down the toilet, and to discard them in trash cans instead, as water pressure is low. (Claire Lee/The Korea Herald)
It is an occurrence that has peeved American expat Michael Hurt for a long time. The research professor at Korea University has been living in South Korea since 1994. “The practice of putting one’s wastepaper into a basket is completely unhygienic and unsanitary,” he told The Korea Herald.

“And it’s interesting that during the MERS (Middle East respiratory syndrome) scare recently and the SARS (severe acute respiratory syndrome) outbreak before that, one of the (points of) emphasis became that of hygiene and reducing transmission of viruses and bacteria. But little thought was given to the fact that feces smeared all over paper sitting out in open-air containers is also pretty problematic.”

Many signs in bathroom stalls explain that the water pressure of the flushing system is low. Hence patrons are asked to toss wastepaper into a bin instead. However, according to Pyo Hye-ryeong, who heads a nongovernmental organization that advocates sanitary public bathroom facilities, water pressure is rarely a cause of clogging in public bathrooms in South Korea.

“According to our research findings, most clogging cases in public bathrooms occur because people flush random objects down the toilet, including food garbage,” said Pyo, who represents the Citizens’ Coalition for Restroom Culture. “Toilet paper manufactured nowadays rarely makes toilets clog because it dissolves in water in about 30 seconds.”

Jen Kim also had a similar experience in a public bathroom inside a cafe in Ilsan, where she saw a sign that asked patrons not to flush outrageous items, including condoms and socks.

The sign in fact had actual pictures of toilets clogged with leggings and what appeared to be somebody’s pants, she said.

“Having learned that some patrons would go as far as trying to flush their pants down the toilet, I understand the logic that having people toss toilet paper into the bin lowers the risk of clogging,” said Kim.

The practice of throwing out used toilet paper into trash cans began here in the late 1980s, after the 1988 Seoul Summer Olympics, according to Baek Chung-yeop, an official at the Ministry of the Interior.

Before the Olympics here, nearly 70 percent of all public bathrooms in Seoul had squat toilets without plumbing systems, he said. 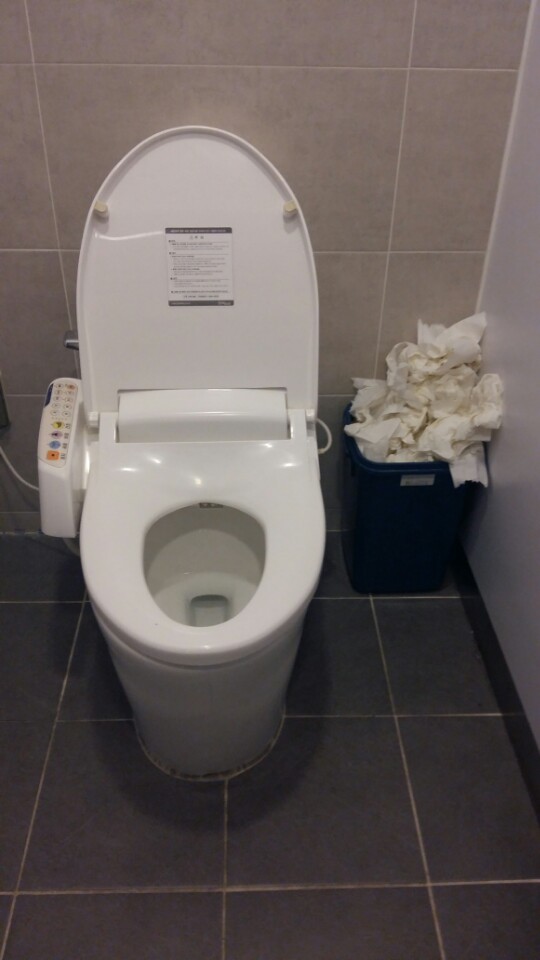 A public bathroom stall in Seoul with a separate trash can for used toilet paper. (The Korea Herald)
“The government replaced as many squat toilets with flush toilets as possible in 1988, because they didn’t want to give a bad impression to visitors during the games,” said Baek, who oversees public bathroom policies at the ministry.

He added, “So now we had these flush toilets, but toilet paper that was being produced at the time didn’t really dissolve in water well. As they often clogged toilets, people started using separate trash cans in the stalls.”

Pyo from the CCRC claimed the practice that continues to this day can be a threat to public health. She has been advocating for public bathrooms that do not have such trash cans since the 1990s.

“Very often the trash cans are not emptied frequently enough,” she said. “Sometimes they remain piled up in a closed space for more than 10 hours. Anyone with common sense wouldn’t think such an environment is in any way hygienic.”

When asked by The Korea Herald about the potential health risks of such trash bins, physicians at the Samsung Medical Center said that one’s chance of contracting an infectious disease is low, unless a person directly touches the used toilet paper.

While Cho Eun-hee, a high-ranking official at the Korea Centers for Disease Control and Prevention, agreed with these doctors, she also noted that children are particularly vulnerable in public bathrooms with piled-up wastepaper.

“Kids are curious and you never know what they would touch in stalls of public bathrooms,” said the director of infectious disease surveillance division of the KCDC.

“The worst-case scenario would be someone -- or a kid -- accidentally and unknowingly touches the wastepaper, doesn’t wash their hands and eats something with their unwashed hands. One may contract a number of waterborne diseases this way.”

Lee explained that Korean bathrooms are already vulnerable to bad odors, as more than 80 percent of properties in Seoul use septic tanks, small-scale sewage systems that treat and dispose of household wastewater on site. In North America, only about 25 percent of the population relies on septic tanks, mostly in rural areas that lack connection to public sewage pipes.

“Septic tanks were introduced to Korea by the Japanese in the 1920s, during the colonial era,” Lee said. “At the time, the Japanese were using the septic system instead of the public sewage system, and as a result, Korea ended up using the same thing.

As septic tank odor is a common problem, Japan has switched to the public sewage system over the last 30 years. Korea is just beginning to realize the problem. We have this trash can problem, on top of the septic system problem.”

The South Korean government has only started taking notice of the problem in recent years. It is gradually making changes to public bathrooms nationwide.

In 2013, the Ministry of the Interior began removing wastepaper bins from bathroom stalls in state-run facilities. This included all Seoul subway stations along lines 5 to 9.

The government has also begun switching its campaign from telling people not to flush anything down the toilet to telling them to only discard toilet paper.

Seoul City Hall, the building of the Gyeonggi Provincial government and Suwon City Hall have removed all trash cans from their bathrooms. “Our ultimate goal is to remove trash cans from all public bathrooms across Seoul,” said Kim Woo-gyeom, who works in the Seoul Metropolitan Government’s public health bureau.

Above all, Pyo from CCRC said that what South Korea needs is public decency. “The thing is, people wouldn’t flush their socks down the toilet at home, because once it clogs, they’ll have to fix it on their own,” she said.

“Those who flush such outrageous items do it partially because they know somebody else will have to deal with it.”