[ The Korea Herald – Send E-mail ]
KRX to adopt English disclosure system
By 박형기
Published : Mar 14, 2016 - 14:47
Updated : Mar 14, 2016 - 15:39
The Korea Exchange is seeking to encourage local listed companies to disclose their mandatory financial information in English by the end of this year, officials of the country’s stock market operator said Monday. 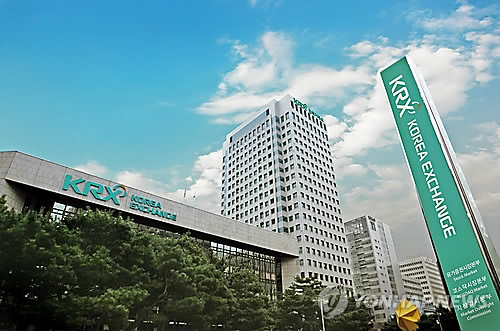 Korea Exchange's headquarters in Seoul (Yonhap)
This plan is in line with efforts for the Korean stock market to be classified as an “advanced market” in the Morgan Stanley Capital Investment’s global stock indices, officials said.

The KRX noted that during investor relations roadshows overseas, foreign investors have constantly pointed out their discomfort as they were unable to access Korean financial information in English, in contrast to disclosure systems of Asia’s financial hubs -- Singapore and Hong Kong.

“Companies will not be legally forced to disclose their financial information in English. Instead, a new system will aim to ‘encourage’ them to file their reports in English,” said an KRX official.

“We seek to adopt this system by the year’s end.”

Listed companies that file their information in English regularly will get incentives, a KRX spokesperson added.

“Obviously, those who make serious disclosure offenses will not be let off the hook,” the spokesperson said.

Korean listed companies that regularly disclose their information in English will be given a grace period of three years during which they will not be severely punished for filing wrong or misleading financial information, the official added.

Last year, of more than 15,000 items disclosed by listed companies, less than 1 percent were in English. However, those filed in English were mostly basic information and promotional materials.

In its initial phase, the KRX seeks to encourage about 170 companies listed on the KOSPI to file their mandatory financial reports in English next year.