Now there is a second Karl Muller -- the original Muller’s son, who jumped into the market in 2008 with his own brand of Swiss wellness shoes, Joya.

“When I was growing up, all I knew was making shoes,” Muller Jr. told The Korea Herald at the Joya Seoul office in Mapo-gu on a visit to Seoul.

Born in 1985, Muller Jr. spent his teens watching his father’s MBT shoes change the industry landscape. He took what he learned and joined forces with a family friend -- former journalist Claudio Minder -- to launch Joya. 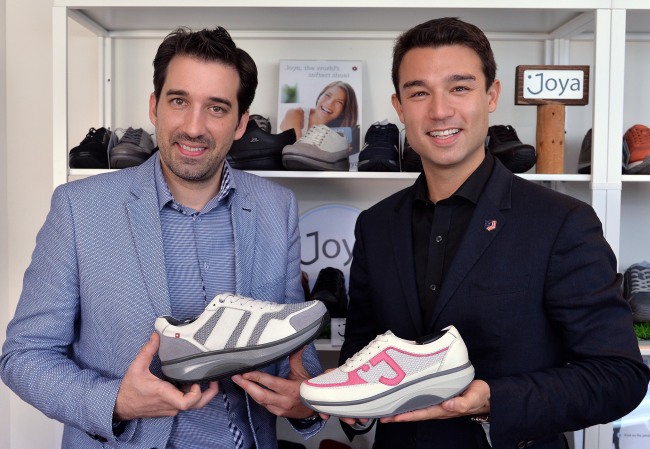 Joya cofounders Claudio Minder (left) and Karl Muller at the Joya Seoul offices. (Lee Sang-sub/The Korea Herald)
Proclaiming itself as the “world’s softest shoe,” Joya hopes to bring together the precise engineering legacy of MBT with a more emotional appeal and younger design.

“Softness is very emotional. People stand in (our shoes), and they say, ‘wow,’” said Muller.

The shoe business, in particular the niche elderly market, has great potential.

“People are getting older, and this segment (of elderly people) is getting bigger,” Minder said. “We’re on the right track.”

Since its entry into the Korean market two years ago, Joya has been enjoying a smooth growth in sales, with a 30 percent increase last year. But the European brand is currently exploring its market position here.

“Korea is a young market for us, so we’re still trying to find our position,” Muller said, adding that Joya has already positioned itself as a luxury product in Japan, a comfort and leisure shoe in the U.S. and a health tool for the upper class in Arab countries.

Still, both CEOs agreed that Korea would be an important market going forward because of its aging population, as well as its production line based in the southern port city of Busan. Nearly 95 percent of Joya shoes’ soles are made in the Korean city and exported overseas.

Although they do not have a professional background, the CEOs have been expanding their business by understanding the different needs of markets around the world.

Currently, Joya has roughly 2,500 stores in 23 countries including those in Europe, Asia, and the Middle East. The lineup includes the function-centric Soft-roll line, the fashionable Soft-style line, and the specialized Soft-Pro line for professional wear.

Joya’s sales are rising despite the steep price tag of its shoes. A pair can cost 180 euros ($201) in Germany and up to 450 euros in Japan, where they are marketed as a high-end product.

When asked about his goal, Muller said he wants to solidify Joya as a brand rather than to maximize sales by following trends.

“Five, 10 years ahead, there will only be a handful of brands. When people think soft shoes, premium quality, they will think Joya,” he said.

“There’s nobody else who can develop this footwear to perfection.”