A pair of Rembrandt portraits owned privately for more than 130 years went on public display in Paris on Thursday, bought under shared ownership by the French capital’s Louvre museum and the Rijksmuseum in Amsterdam.

The portraits date back to 1634 and depict Amsterdam trader Marten Soolmans and his wife Oopjen Coppit. They were painted by the Dutch master for the couple’s wedding and are considered a defining example of his work.

Bought by Baron Gustave de Rothschild in 1877 and kept in France ever since, the pair of paintings, for which the museums paid 160 million euros ($174 million), will spend five and then eight years by turns in each museum, always staying together. 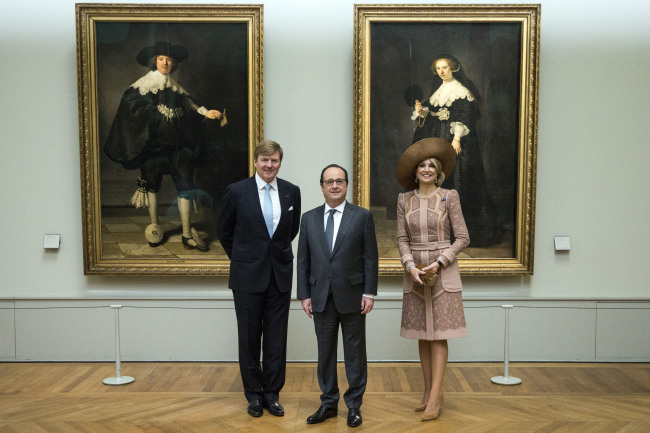 French President Francois Hollande (center), Netherlands’ King Willem-Alexander (left) and Queen Maxima pose next to two of Rembrand’s paintings, the portrait of Marten Soolmans (left), and the portrait of Oopjen Coppit. (AP-Yonhap)
Initially they will hang in the Louvre for three months before moving to the Rijksmuseum, where they will undergo restoration.

The two full-body portraits are mainly in black and white and each stand more than two meters tall. They were unveiled in the presence of French President Francois Hollande and King Willem Alexander and Queen Maxima of the Netherlands during a visit by the Dutch royal couple.

“This is an exceptional work, legendary in Rembrandt’s repertoire. This type of full-body portrait did not exist in Holland in the 17th century.” said Sebastien Allard, director of paintings at the Louvre.

“They are among the most valuable paintings of the era.”