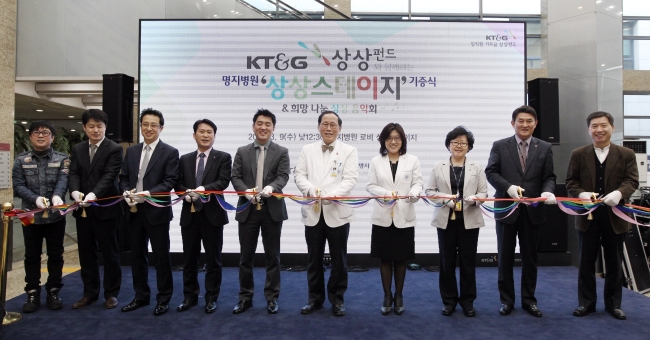 Kim Jin-han (fourth from left), head of the social contribution office at KT&G, and Kim Hyoung-soo (sixth from left), superintendent of Myongji Hospital, at the ribbon-cutting ceremony for the Sangsang Stage at the hospital on Wednesday. (KT&G)
The company has donated 150 million won ($124,000) for the hospital to hold musical performances for patients and their families.

Myongji Hospital was chosen as the beneficiary because it has been holding some 200 performances each year, the company said. The facility named Sangsang stage will allow performances to move off the hospital lobby floor, with a raised stage equipped with an LED screen.

The project was carried out with the company’s Sangsang Fund, a voluntary fund made up of contributions from KT&G employees. KT&G also plans to provide 45 million won for operational costs for the stage.