The two-month drill consists of two parts: the command post exercise Key Resolve slated for March 7-18, and the Foal Eagle field training that will commence Monday and will continue until April 30. 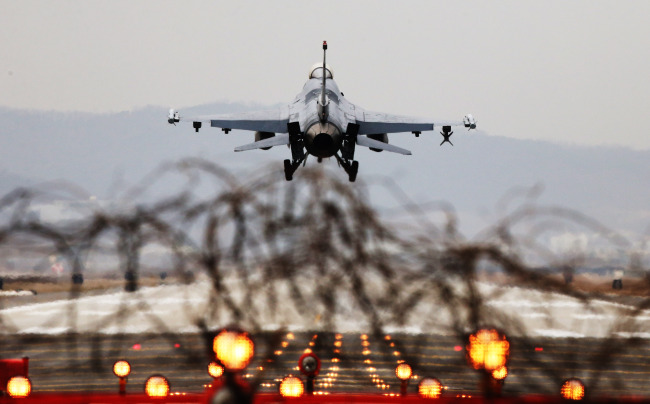 An F-16 fighter jet lands at Osan Air Base in Pyeongtaek, Gyeonggi Province, on Monday. (Yonhap)

The exercise takes place after the U.N. Security Council decided last week on sanctions against North Korea, in light of its Jan.6 nuclear testing and Feb.7 missile launch.

President Park Geun-hye, who has maintained a hard-line approach toward the communist nation, urged U.N. members to firmly implement the sanctions so the North would abandon its nuclear program.

“I urge (the military) to boost our people’s confidence in the national security, while showing the North that its provocations will be met with retribution,” Park said in a meeting with her senior secretaries. South Korea plans to launch unilateral sanctions against the North. 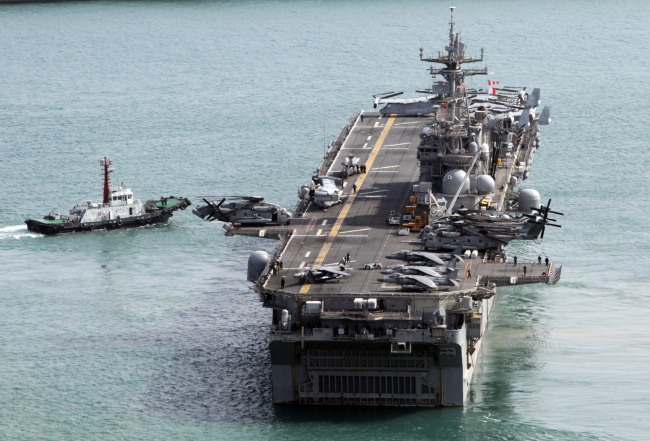 The USS Bonhomme Richard leaves a naval base in Busan on Monday to join Korea-U.S. joint exercises. (Yonhap)
According to the Ministry of National Defense, nearly 320,000 military officials from the two countries will partake in the drill, marking the largest number since 2008 when the two drills began to be jointly conducted.

Some 17,000 U.S. forces are participating in the exercise, while 300,000 Korean troops will take part, according to the ministry.

“We (the military) say this is the largest-ever in terms of not only the number of troops, but in terms of equipment, supplies and weapons that will be utilized in the drill,” a high-ranking military official said.

The U.S. will deploy its high-powered strategic assets during the exercises, including its B-2 stealth bomber, nuclear-powered submarine USS North Carolina and nuclear carrier USS John C. Stennis that will dock in Busan soon.

For the first time during the joint exercises, allies will carry out OPLAN 5015 -- signed last year -- that stipulates precision strikes against Pyongyang’s Kim Jong-un regime as well as the communist country’s nuclear and missile facilities. Allies’ four-stage 4D plans on North Korean threats -- detect, disrupt, destroy and defense -- will also be applied in the drills.

“This exercise will inspect the readiness of South Korean and U.S. military, while expressing our collective will against North Korea. It will also suppress the North’s moves for further provocation,” an official from the Combined Forces Command said.

Officials denied allegations that the content of the drills were directly influenced by the North’s recent actions that raised inter-Korea tensions. On the coattails of the Feb.7 missile launch, the allies announced that they will discuss possible deployment of the U.S.’ Terminal High Altitude Area Defense system against Pyongang’s missile threats.

The United Nations Command informed the North Korean army of the joint exercises via its Panmunjom mission in the demilitarization zone.

The South Korean military said details of the plan were updated “via judgement on the volatile situation,” but refused to comment whether it was directly affected by the nuclear testing and the missile launch.

Allies have also commenced on Monday their biennial combined amphibious “Ssangyong” exercise, which officials said is also the largest-ever of its kind. Some 4,500 South Korean marines and Navy sailors, 12,200 of their U.S. counterparts, 130 Australian soldiers and 60 New Zealand soldiers will conduct a simulated assault along beaches in vicinity of Pohang.

A total of 30 South Korean and U.S. ships -- including amphibious assault USS Bonhomme Richard -- and 55 U.S. marine aircraft will be mobilized.

Reacting to the annual drills, North Korea’s all-powerful National Defense Commission released a statement that it will launch an “all-out offensive.”

“As the joint military drill is regarded as a blatant nuclear provocation against the sovereignty of the republic (North Korea), our military counteractions will be a preemptive and aggressive nuclear attack,” it said. It added that it has military strategy to strike contiguous U.S., reiterating the claim it made on Friday.

The U.S. State Department has called its bluff, questioning the North’s ability to arm an intercontinental ballistic missile with a nuclear warhead.

Observers, such as Dongguk University’s North Korean studies professor Kim Yong-hyun have speculated that Pyongyang may attempt an armed provocation in the near future, in a bid to show off its strength before its ruling Workers’ Party’s seventh congress in May.

“There are no signs of further provocations from the North yet, but we (South Korea and the U.S.) are keeping a close eye,” a military official said.