Located in the bustling commercial and business district, Gangnam Station on line No. 2 drew 204,508 passengers on average daily, with a total of 74.6 million using the station last year. 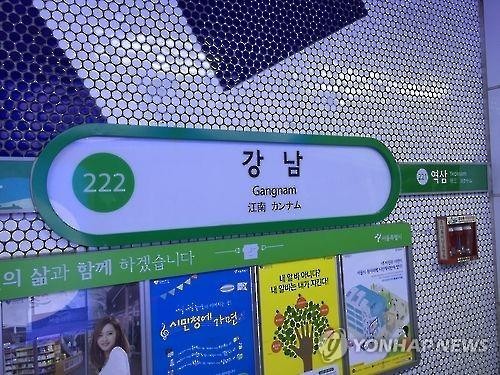 (Yonhap)
The Seoul Metropolitan Government compiled the data by analyzing passengers’ usage of public transport cards at subway stations encompassing lines No. 1 to No. 9 in Seoul.

The number of passengers getting on and off the subway at the station increased from 75.2 million in 2011 to 76.6 million in 2014, but it dwindled last year during the outbreak of MERS.

Express Bus Terminal Station in southern Seoul, which has platforms for lines No. 3, 7 and 9, came in second for the third consecutive year, serving 189,632 passengers per day. Last year, a total of 69.2 million commuters used the station, which is linked to one of the nation’s major bus terminals.

The third spot went to Jamsil station in eastern Seoul, which has lines No. 2 and 8. The station drew 169,062 passengers on average every day and 61.7 million in total last year. It lost the No. 2 spot to Express Bus Terminal station in 2013.

Hongik University Station, located in the popular district with hip restaurants, bars and clubs, made it to the list of top five busiest stations last year, serving 55.1 million last year. Some 152,090 passengers use the station every day.