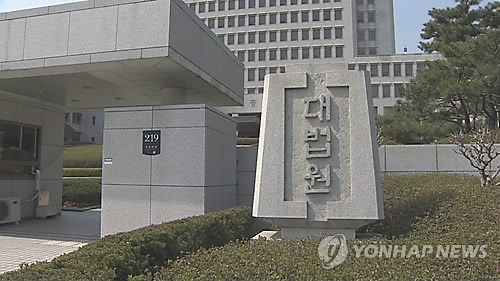 (Yonhap)
South Korea’s top court ruled Thursday that the suicide of the vice principal of Danwon High School, which had been attended by 250 victims of the Sewol ferry disaster, cannot be considered death in the line of duty.

The Supreme Court upheld earlier rulings that had rejected the request from the bereaved family of Kang Min-kyu, who was 52 years old when he died, seeking compensation entitled to public servants who die on the job.

Kang, one of the survivors from the nation’s biggest maritime disaster, was found dead in an apparent suicide near a gym in the port city of Jindo, two days after the capsized ferry left 304 people missing or dead on April 16, 2014. Most of them were students on a school trip.

In a suicide note, he said that he could not live with the knowledge that his students were still missing. “The field trip was my idea and death of the students was my fault. I will take all the responsibility.”

After he died, his family tried to claim compensation given to the kin of those who have honorably sacrificed their lives on the job, but their application was refused.

The Ministry of Personnel Management recognized seven teachers and two other temporary teachers as killed in the line of duty. The entitlements for the kin of the education officers who died on the job include benefits for their children, pension and tax cuts.

Kang’s family then brought the case to court.

The local district court ruled against the family, saying that his death is not subject to the Public Officials Pension Act. It stipulates that only those who died as a direct result of taking high-level risks to save the lives of others can be considered as having died honorable deaths.

“It seems like Kang suffered from survivor’s syndrome and mental shock as a person in charge of the school trip and as a person who had survived alone,” the court said in a ruling.

Doctors have pointed out that Kang’s suicide was a result of “survivor syndrome.” Posttraumatic stress disorder includes symptoms such as depression, anxiety and mood swings.