[ The Korea Herald – Send E-mail ]
Assembly pulls out all stops to get job done
By 원호정
Published : Feb 14, 2016 - 18:14
Updated : Feb 15, 2016 - 10:34
The National Assembly is set to convene parliamentary sessions this week as part of its last-ditch efforts to pass pending bills before the lawmakers set aside the legislative affairs to accelerate their campaigns for the April general elections.

Kicking off Monday with the rival parties’ floor leaders addressing the Assembly, a monthlong extraordinary session will include an interpellation upon state affairs on Feb. 17-18 and a plenary session, scheduled on Feb. 19 and 23, where the pending bills are expected to put to a vote.

The ruling Saenuri Party and opposition The Minjoo Party of Korea have been clashing over the bills designed to improve North Korea human rights, devise counterterrorism measures, relax regulations on the service industry, overhaul the labor market and redraw the electoral map for the upcoming elections.

“There is only a one-month window of opportunity before the extraordinary session ends on March 10. In the meantime, the parties agreed to make their best efforts to pass the contentious bills and finish redrawing of constituencies,” said Saenuri floor spokeswoman Rep. Moon Jeong-lim.

President Park Geun-hye, meanwhile, is scheduled to deliver a speech at the Assembly on Tuesday. Kim Sung-woo, senior presidential secretary of public affairs, said Sunday that the president would call for bipartisan efforts to address security threat from the North and sign the pending bills into law. 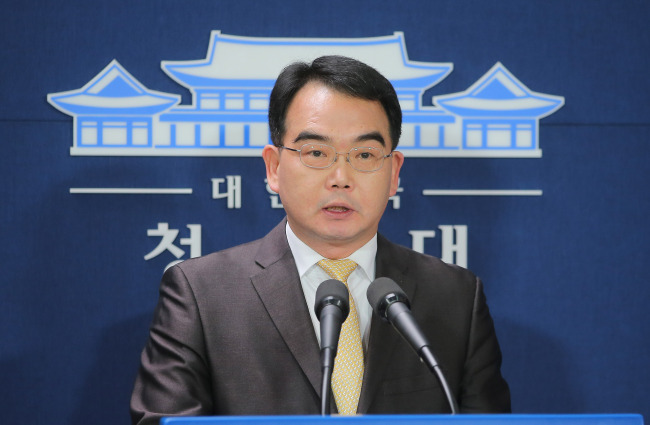 Senior presidential secretary of public affairs Kim Sung-woo told reporters at Cheong Wa Dae that President Park Geun-hye would deliver a speech at the National Assembly on Tuesday. (Yonhap)
While the parties have neared a compromise on the bills about North Korea human rights abuses, they remain at odds over legislation related to the government’s initiatives such as labor reform, business regulation on service industries and counterterrorism measures.

Though the Minjoo Party accepted the president’s plan to speak, its spokesman Rep. Kim Sung-soo said the rival parties should reschedule the plan because it would clash with prearranged events, such as parliamentary speeches from each of the party’s whips.

The main opposition also maintained that it would not approve the three sets of legislation unless the Saenuri Party agreed to include provisions in the bills to ensure temporary workers’ job security, address concerns about medical privatization and prevent excessive surveillance power for intelligence agencies.

The two-day parliamentary inquiry is expected to see all-out partisan wrangling over the government decision to shut down the Gaeseong industrial park following Pyongyang’s nuclear test and rocket launch, which Seoul and its allies view as a disguised ballistic missile test.

While the Saenuri Party hailed the decision as an inevitable call to cut off a source of funds for the North’s nuclear programs, the Minjoo Party and other minor liberal parties slammed the government for undermining the two Korea’s reconciliation efforts and hurting South Korean businesses in the complex.