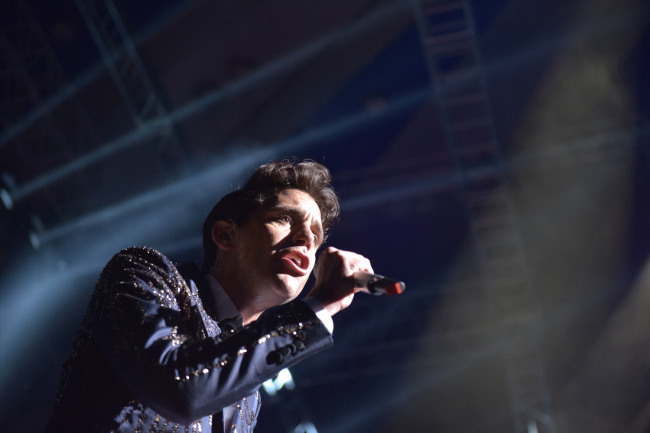 British singer-songwriter Mika performs at a concert in Seoul last Friday. (Yonhap)
The singer songwriter lit up Jamsil Arena with sparkles, sequins and confetti in his return to Seoul for the first time in 2016 on Feb. 12.

“Good evening, Seoul,” the artist announced, stepping onto the stage in a gold-sequined Maison Valentino piece. A spotlight was all he needed to kick off the evening, taking to his piano and performing a bonus track off the new album, “Porcelain.”

“Seoul, I decided tonight to start my show, just for now, on my own. So that I could have you just to myself.”

It is hard to believe the singer was here only nine months ago, the crowds welcoming him with cheers and open arms.

The melancholic start quickly transformed into a confetti and streamer charade with Mika’s third song, “Talk about you,” getting the audience up and involved as the curtain dropped. It was the beginning of a journey through Mika’s song and dance “heaven”.

The artist burst with energy and enthusiasm through every moment of his seventeen-song set. Charismatic and humorous, the crowd was drawn to him, listening carefully to every word, whether Korean, English or French.

“Be nice to the piano. My poor piano. I smash you. I jump on you. I hit you with sticks. Now I’ll be nice to you,” he announced in a stream of conscious before bringing his fingers to the ivory keys. “Oh, you’re welcome. ‘Gamsahamnida’ (thank you), piano.”

Playing everything from hits “Grace Kelley” and “Big Girl (You Are Beautiful),” to songs off his latest album “No Place in Heaven,” the artist kept the audience jumping and dancing alongside him for the entire 100-minute set. From a song dedication, to entering the ecstatic crowds, Mika continued to make the audience laugh, cheer and, at times, become absolutely silent.

“You are no longer people, you are thousands of stars,” Mika said halfway through “Underwater.” The artist’s enthusiasm made the occasional cheesiness easily forgivable.

The arena lit up as Mika began swishing and whooshing a phone light in all directions like a shooting star. The audience followed along.

The concert left the audience begging for more, and Mika pulled through yet again, offering a two-song encore, with sparkles, lights and dance moves to wrap it up.

Returning to the stage as merely a silhouette, Mika finished the performance with “Love Today” and “Stardust” to polish off the night.

From Sequined tuxedos and mime to drumsticks on piano and Hawaiian dancing, Mika’s color and flamboyance gave Seoul a night to remember.

Mika performed in South Korea from the 11th until the 13th of February. The artist will continue his “Heaven” tour in Asia and Europe throughout the year.