[ The Korea Herald – Send E-mail ]
Pope in Mexico after historic talks with Russian patriarch
By 원호정
Published : Feb 13, 2016 - 11:31
Updated : Feb 13, 2016 - 11:31
MEXICO CITY -- Catholic faithful flocked to the streets of Mexico City to greet Pope Francis on Friday after the pontiff held a historic meeting with the head of the Russian Orthodox Church.
President Enrique Pena Nieto welcomed Francis at the airport while crowds lined the streets, preparing to hold up their phones to light the way for the popemobile across the mega-capital of the world's second largest Catholic country. 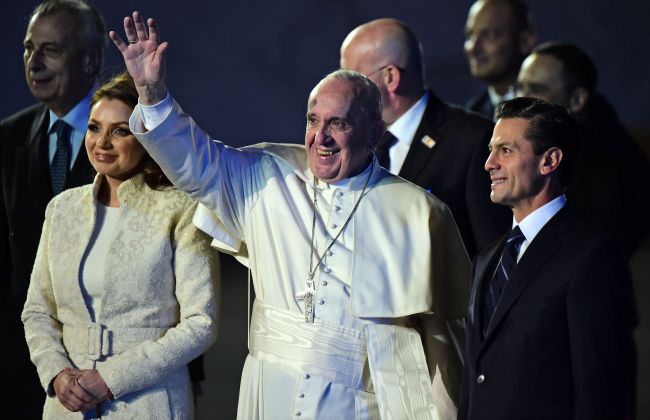 Pope Francis (center) waves next to Mexican President Enrique Pena Nieto (right) and First Lady Angelica Rivera (left) upon his arrival at Benito Juarez international airport in Mexico City on Friday (local time). (AFP Photo)
"Francis, brother of the Mexican people!" people chanted outside the airport, while a mariachi band played as the plane landed.
But before beginning a five-day trip that will take him across Mexico's violence-torn regions, Francis stopped in Cuba to mend a 1,000-year-old Christian rift with Russian Patriarch Kirill.
"For nearly one thousand years, Catholics and Orthodox have been deprived of communion in the Eucharist," they said in a joint declaration signed after they hugged and kissed at Havana's airport.
"We are pained by the loss of unity, the outcome of human weakness and of sin."
It was the first meeting between the heads of the Eastern and Western churches since the great schism of 1054 when the churches split apart, with the Eastern church rejecting the authority of Rome.
"Mindful of the permanence of many obstacles, it is our hope that our meeting may contribute to the re-establishment of this unity willed by God,"
the church leaders said.
Their meeting was driven by rising violence in recent years in the Middle East, where Christian communities have suffered violence at the hands of extremists.
"We call upon the international community to act urgently in order to prevent the further expulsion of Christians from the Middle East," they said.
- 'At last we meet' -
=====================
Between them, they are the spiritual leaders of more than 1.3 billion Christians.
"At last we meet. We are brothers," said the 79-year-old pope, in white robes and a skullcap, as he met the white-bearded Orthodox leader, 69, in black robes and a white headdress. "Clearly, this meeting is God's will."
The meeting on neutral ground -- hosted by the communist, atheist Cuban leadership of Raul Castro -- was decades in the planning, with the final obstacles swept away by the pope's determination and global politics.
But he also framed the encounter in a broader context of engaging Russia, saying Moscow could be an important partner for peace in the world.
Francis has twice received Russia's President Vladimir Putin at the Vatican. The Russian leader has clashed with other powers recently over the conflicts in Syria and Ukraine.
The Orthodox Church's refusal to accept the primacy of the Roman pontiff has long been the primary barrier to a rapprochement between the Roman Catholic and Orthodox churches.
- Troubled Mexico -
===================
The pope's layover in Havana overshadowed the start of a trip that will highlight many of Mexico's ills, from drug cartel violence to the plight of migrants from Central America risking their lives to reach the United States.
Jubilant crowds lined the streets see the pontiff across the metropolis of
20 million people, waving the yellow and white flag of the Vatican or images of the pope.
"Hopefully, his visit and prayers will help Mexico because things are bad and violent," said Ana Gonzalez, a 49-year-old housewife who waited with her teenage son for the popemobile to pass by.
On the eve of his arrival, a prison brawl between rival factions of the Zetas drug cartel left 49 inmates dead in northern Mexico, underscoring the control gangs have over penitentiaries nationwide.
Francis is due to meet inmates at another notorious prison on Wednesday in Ciudad Juarez, a city bordering Texas that was once known as the world's murder capital.
The pope will spend Friday night at the Vatican ambassador's residence before meeting with Pena Nieto at the National Palace on Saturday.
While three popes have visited the country, he will be the first to be hosted at the ornate palace, 24 years after the Vatican and Mexico restored diplomatic ties.
Later that day, he will make a pilgrimage to the Basilica of Our Lady of Guadalupe, a major Catholic shrine dedicated to a dark-skinned Virgin Mary who appeared before indigenous peasant Juan Diego in 1531.
The pope will wade on Sunday into the crime-riddle suburb of Ecatepec for a massive outdoor mass in a city marred by a spate of murders of women.
He then heads on Monday to the impoverished, indigenous southern state of Chiapas.
On Tuesday, he goes to Morelia, the capital of Michoacan, a western state where farmers formed vigilante forces to combat the cult-like Knights Templar drug cartel.
His trip ends on Wednesday with a massive cross-border mass in Ciudad Juarez, where hundreds of thousands of people will flock from both sides of the border to hear him speak about migration. (AFP)