[ The Korea Herald – Send E-mail ]
[Herald Interview] Um Hong-gil always has a new peak to reach
Mountaineer-turned-humanitarian says he refuses to give up, always thinking about his next goal
By KH디지털2
Published : Feb 12, 2016 - 14:54
Updated : Feb 12, 2016 - 14:59
Stepping into Um Hong-gil's inner office at the Um Hong Gil Human Foundation in Jung-gu, Seoul, one can’t help but be struck by the feeling that everything is small -- the man and the office, both.

Um is of medium stature, and the office is ordinary. But when considered against the feats that constantly tail Um's name, his down-to-earth manner, easy smile and unremarkable office are a bit unsettling at first. It’s difficult to imagine him clinging to the Himalayan slopes, fighting back the numbing cold and planting his feet into unsteady ground, eventually inspiring the recent hit movie “The Himalayas” with his true story of taking a team up Everest to retrieve the body of a lost colleague. 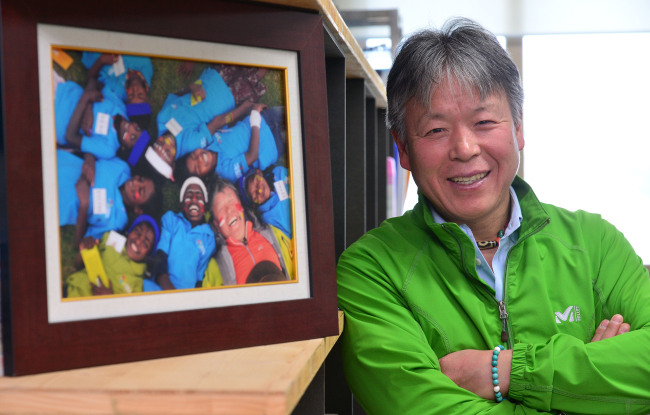 Mountaineer Um Hong-gil poses at the office of the Um Hong-gil Human Foundation in Jung-gu, Seoul. (Lee Sang-seob/The Korea Herald)
This was the man who climbed the 16 slopes higher than 8,000 meters in the Himalayas -- the commonly recognized 14-peak Himalayan set, including Mount Everest and K2 (collectively known as the Eight-Thousanders), and two peaks (Yalung Kang, Lhotse Shar) that he believes deserve the same status as the original 14. Along the way, on his 38 expeditions, he lost six colleagues and four sherpas, as well as rotational movement in his right ankle and one knuckle of his right big toe. His first 8,000-meter Himalayan climb was Mount Everest, in 1985. His first success was Mt. Everest, in 1988. He failed 18 times, but succeeded 20 times.

This was what the world knew him for.

Yet mountain climbing seemed to be the last thing on his mind as he scuttled around his office. Um is famous for his goal-oriented style -- fellow mountaineers nicknamed him the “tank” for his driven personality. These days, it was clear that his energies were focused on his new project, building schools for children living in the mountainous rural villages of Nepal.

“I'm very busy these days,” he said as he shuffled some papers while motioning for me to take a seat. The interview took place on Feb. 5, just before the Lunar New Year holiday, but he seemed completely uninterested in the break. “I’m headed to Nepal on the 22nd, to commemorate the opening of my 10th school.” 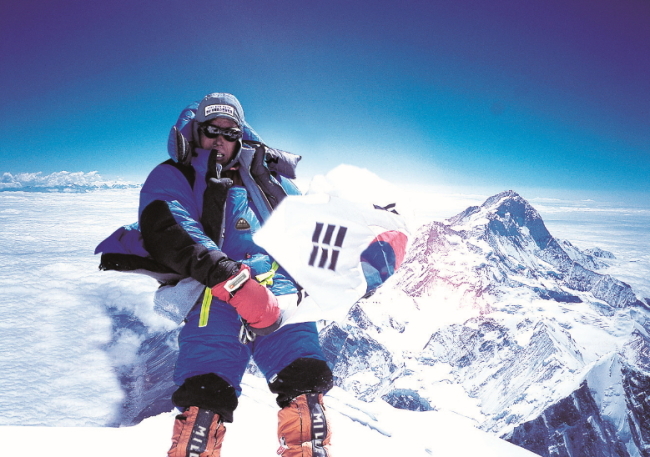 Um hong-gil poses at the summit of Mount Everest in 2002.(Um Hong Gil Human Foundation)
After climbing the 16 peaks, he founded the Um Hong Gil Human Foundation in 2008 and began the “Human School Project,” which aims to build 16 schools in Nepal -- one for each of the peaks he has climbed. So far, 10 schools have been built, with three more currently under construction.

Um says that every time he came back from an expedition alive, he was more acutely aware of the “desperation” of wanting to reach another peak. Witnessing what he could lose on an expedition, he said, was what made him more desperate than other mountaineers who had not experienced that despair.

“I prayed as I climbed up, promising that I would live my life giving back,” he said. And once he began climbing with that mindset, he “began to see the people living at the bottom of the mountain.”

“Before, I had only seen the mountain as I climbed, but I began to see the people. And that's where I got the idea (for the schools).” Um says he saw the way in which poverty was passed down through generations in Nepal, and how the children accepted poverty as destiny. “Education was the only lasting way to change their quality of life,” he said. 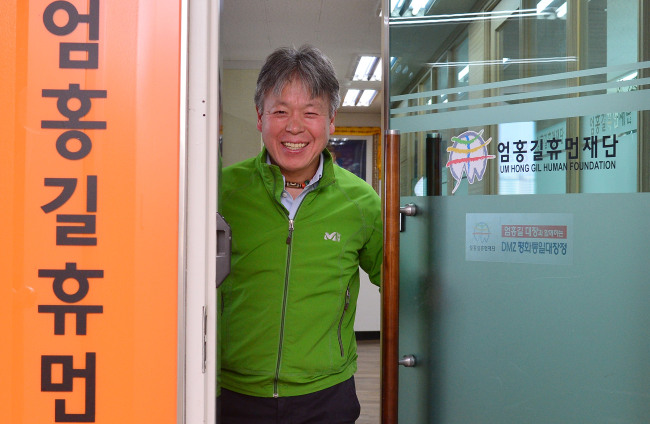 Mountaineer Um Hong-gil poses at the office of the Um Hong-gil Human Foundation in Jung-gu, Seoul. (Lee Sang-seob/The Korea Herald)
Um described how the school sites were chosen, taking into consideration factors such as the difficulty of the terrain and the community’s need and desire for the school.

“We only go to villages where other NGOs are afraid to go,” he said. Building schools at the selected sites that meet his foundation’s criteria is particularly difficult because many of the materials must be flown up to the villages via helicopter, sometimes with transportation costing more than the materials themselves.

“It’s really hard,” he said, shaking his head. “And to be honest, I didn’t have to say I would build sixteen. Other people told me to start the project without a specific number, so that no matter when I decided to pull out, no one would know my original goal. But it was a promise I made to myself and to the Himalayas, and so I need to stick to it.”

Throughout the interview, Um repeated several times that he “could not stop” or “could not give up” on his goals. This fierce hostility towards leaving a project unfinished was, to him, what had allowed him to realize his goal of hitting the 14+2 8,000-meter peaks, and what continued to drive him.

“I learned on my expeditions that I would never be able to push myself if I continued to be afraid of death, so I tried hard to get over that,” he said. “I’m not afraid of dying anymore, but what I am afraid of is my own mind, that I would want to quit.”

Um said that his unwillingness to leave his Human School Project unfinished was also why he had turned down an offer to run for public office as a member of the ruling Saenuri Party earlier this month.

“It’s important work, to work for the government and make policies and laws,” he said. “But right now, I have this foundation. I’m helping people here. It’s not the right time.”

He seemed to be leaving himself open to the possibility of pursuing public office someday, but he was also firm in stating that the completion of the 16 schools would come first.

Um did acknowledge that the circumstances were favorable right now for a political run. He compared it to his experience on his 16th peak, Lhotse Shar, when he had to turn back with just 200 meters left to the summit.

“All of the weather conditions were better than usual, but I could see that it was too dangerous to climb up. It just wasn’t meant to be that time, so I headed back down,” he said.

When asked if it would be the right time once all of the schools were built, he said, “I don’t know. I do have an idea of my next goal after the Human School Project, but I’m not ready to announce it yet.”

“It’s just not the right time to announce it,” he added with a chuckle.