[ The Korea Herald – Send E-mail ]
Korea to help firms troubled by Gaeseong zone woes
By 황장진
Published : Feb 12, 2016 - 14:10
Updated : Feb 12, 2016 - 15:13
South Korea on Friday unveiled a set of measures to help minimize any losses incurred by South Korean firms from the closure of a joint factory park in North Korea.

North Korea expelled all South Korean nationals on Thursday from the Kaesong Industrial Complex in the North's border city and froze factory assets by South Korean firms in retaliation for Seoul's decision to shut down the complex. 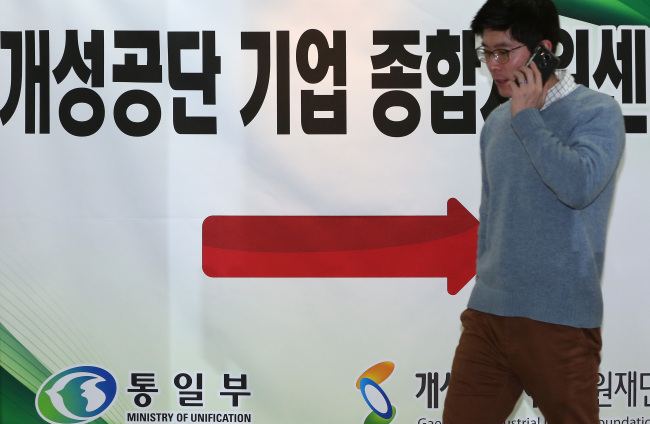 (Yonhap)
Earlier this week, South Korea shut down the industrial park in response to the North's latest nuke test and long-range rocket launch, bringing an end to the last remaining symbol of inter-Korean reconciliation.

"We expressed very grave regret over the North's move. North Korea should take all responsibility for what will happen from now on," Unification Minister Hong Yong-pyo said at a press briefing.

The minister warned North Korea not to damage South Korean assets at the factory zone.

A total of 124 South Korean firms were operating factories at the complex, employing more than 54,000 North Korean workers to produce labor-intensive goods such as clothes and utensils.

The government said that it will provide emergency liquidity to ailing firms on the principle that its supportive measures will be provided "swiftly and sufficiently."

Officials said the government will extend the maturity of loans borrowed by firms suffering from a cash shortage.

Also, the government said it will defer the payment of national and local taxes and public utility bills, such as electricity.

The support measures come as the Kaesong-based firms are expected to see huge damage.

When the industrial park was closed in 2013 for 160 days, South Korean firms reported a combined loss of 1.05 trillion won (US$873 million).

The companies, however, claim the actual damage will be greater considering the loss of business partners and credibility.

Experts said the possibility that the two Koreas would hold talks over the movement of equipment at the zone is slim to none, given the North announced it has closed the complex with a complete asset freeze and designated it a military zone.

"There should be consultations with North Korea if South Korean firms want to bring their equipment and products home," said a government official.

North Korea is highly likely to seize and dispose of the Kaesong firms' assets, as it took such steps with South Korean assets at Mount Kumgang in the North following Seoul's suspension of a joint tourism program in 2008. (Yonhap)