With Lunar New Year upon us, there is no escaping the elbow-to-elbow crowds that flood the nation’s train stations as millions of locals travel out of the cities to reunite with their loved ones.

While long lines at ticket booths are not surprising, over the past few years, a new food culture of has also developed there, with long lines at food places have also started appearing in train stations. 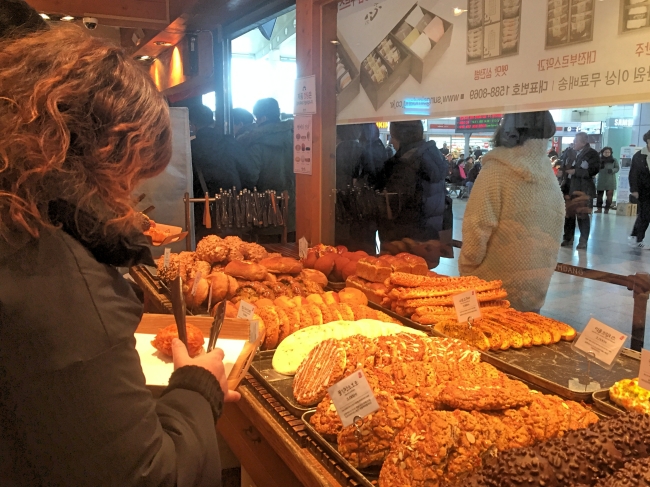 Interior look at Daejeon Station‘s bakery Sung Sim Dang. (Julie Jackson/The Korea Herald)
Rather than typical food courts, many of the country’s major train stations are seeing an influx of independent snack shops, bakeries and quick-eat joints. This trend has attracted attention on social media, and some stations have a growing reputation for an “eat while you wait” culture.

Busan, Korea’s second-largest city, is known for its wide variety of food as well as attractions such as Haeundae and Gwangalli Beach. These days, another popular stop is the Samjin Eomuk store located near the Busan KTX station lounge. Samjin Eomuk has three selections -- individual fried fish cakes, handmade fish cake croquettes, as well as fish cake packages. 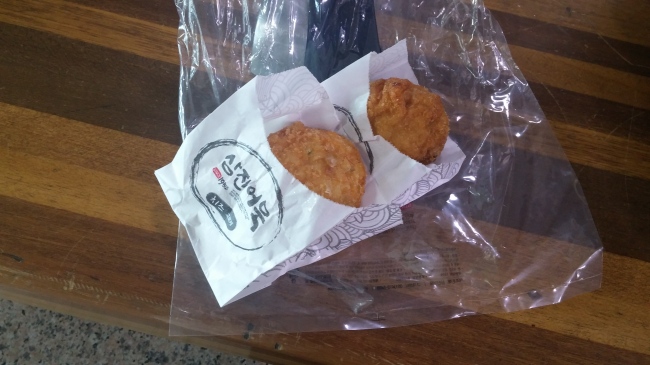 Hot pepper fish cake croquettes at Busan KTX Station (Jung Eun-jin/The Korea Herald)
It has its roots in a fish cake factory established in 1950 and carried on as a three-generation family business. The store is known for transforming fish cakes into on-the-go snacks as well as having high-quality products that are more than 70 percent fish, instead of wheat and starch. This allows for a more chewy texture.

“Samjin’s menu items broke a stereotype that fish cakes are for meals not for snacks,” said Chloe Choi and Becky Yu, two 19-year-old tourists from Ansan, Gyeonggi Province, who were visiting Busan for the first time. Choi and Yu added that they could not resist buying a whole bunch of fish cakes since they all looked so appetizing.

And despite the recent spate of cold weather, Samjin has had a constant stream of visitors, even early in the morning. Cashiers Kim Tae-yeon and Yoon Su-ok said the crowd was far smaller compared to most days, adding that people usually have to wait in line for about 20 to 30 minutes.

“Samjin Eomuk not just a tourist attraction,” said Kim, “Due to its quality products, even local people often come here for fish cakes.”

Another popular train station snack joint is a small bakery shop in Daejeon Station. It reportedly makes around 5.4 billion won a year in profits and is notorious for its painstakingly long waiting times, despite its long lines and lack of anywhere to sit.

Whether it’s a national holiday, weekend, morning, midday or night, it is almost a sure-fire guarantee that customers will have to wait their turn to eat at Daejeon Station’s Sung Sim Dang.

One of the city’s most historical food establishments, Sung Sim Dang was established in 1956 and is still to this day, exclusive to Daejeon. In 2011, the establishment received its first listing on Michelin’s travel guide for Korea.

The popularity of this quaint train station branch shop is such that there’s even a separate window selling bulk quantities of its red bean paste and the buchu soboro (stuffed with ground pork and sliced chives).

While many of those contemplating the queue for Sung Sim Dang’s fried treats thought twice, others were willing to stick it out.

“I don’t really mind waiting in the long line because whether it’s for the train or for food, I’m still waiting around,” said one of the bakery’s patrons surnamed Choi.

“I heard a lot about this bakery but this is my first time actually eating here,” said another patron, patiently waiting in line to purchase a box of soboro. “Honestly, when I saw how long the line I wasn’t very surprised because it’s a very popular place and their breads are only available in Daejeon. I just keep telling myself if this many people are willing to wait, then it must be good.”

Aside from Sung Sim Dang, its neighboring noodle shop Daejeon Station Garak Guksu, stands as the station’s second most popular eatery. Despite its limited menu of noodle soups -- chicken, tofu and spicy – the small independent joint is again no stranger to having its patrons queuing up by the door.

Granted, Daejeon Station is nowhere near the scale of Seoul Station and doesn’t exactly have an abundance of dining options, but the few quick-bite shops it does have are known to illicit a number of customers who claimed to travel to the station specifically for the food.

Alongside Busan and Daejeon, there are plenty more train stations that enjoy the same type of food-filled success.

PNB, a bakery with outlets at Jeonju and Iksan stations in North Jeolla Province, has been known for its handmade chocolate moon pies, selling an average of 10,000 pie snacks daily. Banwoldang Croquette, located at Gumi and Dong Daegu stations, attracts people with a variety of croquettes including cheese-potato croquette and crab cream cheese croquette.

Aside from Banwoldang Croquette, Dong Daegu station also has Hwangnam bread, also known as Gyeongju bread, and whole corn bread of Samsong Bakery, which commonly known as “mayak” or “drug” bread due to its addictively sweet taste and funny texture of popping sweet corn. Ulsan station’s Eonyang Bulgogi restaurant is known for tteokgalbi table d’hote, Korean traditional cuisine made by shaping a mixture of beef and pork then grilled on charcoal.