The period was one of despair and turmoil in Korea, whose spirit and culture had been suppressed by Japan. 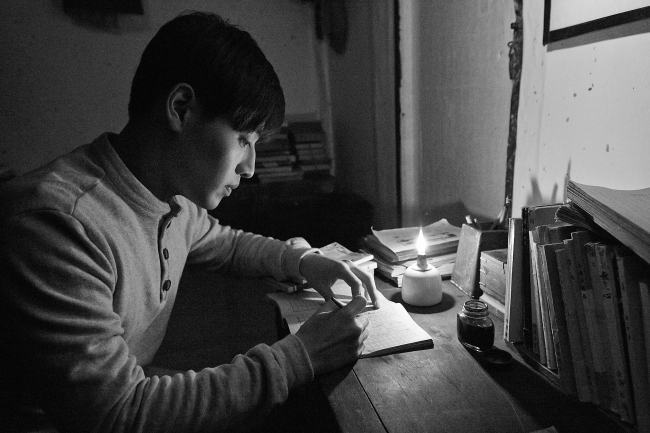 A scene from “Dong-ju,” starring Kang Ha-neul as poet Yun Dong-ju. (Megabox PlusM)
Warm-hearted, passive but logical Yun Dong-ju wanted to write poetry despite objections from his father, who wanted his son to become a doctor. Song Mong-gyu, who is aggressive and outgoing, wants to instigate revolution by resisting the Japanese through literature. Kang Ha-neul plays poet Yun, and Park Jung-min plays Song.

The story of these two artists, based on the real lives of Yun and his friend and cousin Song, holds the film’s narrative structure tightly together throughout its 110 minutes. 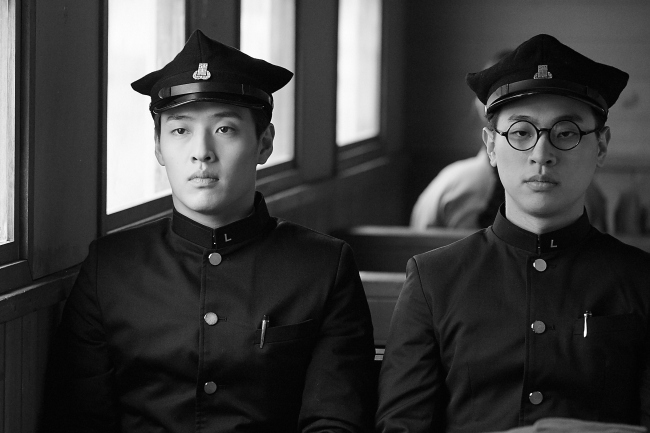 A scene from “Dong-ju,” starring Kang Ha-neul (Yun Dong-ju) and Park Jung-min (Song Mong-gyu).
Opposites strongly attract in the movie. The two characters interact and tell their stories so well from their own perspectives and conflicting interests that they are comparable to characters like James Kirk and Spock from “Star Trek” or Buzz and Woody from “Toy Story.” Like their fictional counterparts, the two need each other to survive, despite their differences.

As Lee Joon-ik said during a press conference last week, this low-budget film was only made possible because of the two – Yun and Song – who were very different.

“Yun’s life journey wasn’t always smooth sailing, but ended satisfactorily, while that of Song had been satisfactory, but ended poorly. It was these two different personality traits that got me interested in making this movie,” Lee said at a press conference after the screening of “Dong-ju” in Seoul.

Through smooth intercuts between interrogation scenes of Yun in a Japanese prison in the present, and Yun and Song’s past stories showing what they wanted in life, Lee skillfully tells the story of the two without letting the plotline drag at any point.

Though next year marks the 100th anniversary of Yun and Song’s birth in 1917, their lives have never before been portrayed on film or TV. But Lee said the proximity of the film to their anniversary wasn’t intentional.

The film’s editing does provide audiences cross-references to character-driven films like Bryan Singer’s “The Usual Suspects” and Steven Spielberg’s “Catch Me If You Can,” whose narratives progress by cutting between the scenes of narrative present and past, keeping viewers immersed and maintaining suspense about how the protagonists will fare at the end. The sweet guitar melody further contributes to the tempo of “Dong-ju,” which is nearly reminiscent of the guitar soundtrack of Clint Eastwood’s western “Unforgiven.”

Shooting especially with digital cameras still has limits compared to shooting on celluloid, which provides better contrast and texture. But given that the film’s budget was just 500 million won ($413,000), director Lee said he opted to shoot this way to save money.

The strong narrative structure of “Dong-ju,” overall, overshadows the challenges posed by digital cinematography, and makes audiences feel emotionally attached to the two young writers who had no choice but to meet their tragic fates in times of tragedy. The movie hits theaters on Feb. 18.