The 2015 corporate earnings this week showed that the manufacturing industry, once the backbone of the nation’s exports-driven economic growth, is losing steam at a fast pace. 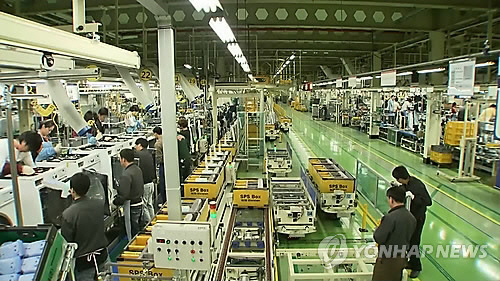 Samsung Electronics and Hyundai Motor announced a 19 percent and a 14.9 percent drop in net profit, respectively, this week.

Samsung’s profit fall in 2015 was attributed to a plunge in the operating profits of its mobile phone business, hit by Chinese rivals.

Despite a record high sales of 4.96 million units in 2015, Hyundai Motor’s net profit tumbled due to weakened currencies in emerging markets and intensified competition.

Other major manufacturing businesses, including steel, shipbuilding and construction too suffered a decline in net profits.

Only a few technology-driven companies and Internet giants like Naver saw an improvement in profitability last year.

According to a recent sentiment survey, the nation’s major manufacturers are more pessimistic about business conditions for the first quarter of this year due to China’s slowing growth and a protracted slump in domestic demand.

South Korean manufacturers’ business sentiment sank to 66 for February, its lowest level in seven months, a poll by the Bank of Korea showed Friday.

A reading of under 100 means pessimists outnumber optimists.

Domestic and overseas pundits advised Korea to bring in innovation in the manufacturing businesses so they continue to lead the economic growth, while advancing the services sector.

Marco Annunziata, the chief economist of General Electric, said in a seminar, held in Seoul, last year, “Korea faces three major challenges: strong competition from China and other countries, sluggish productivity in the services sector, and a rapidly aging population.’’

To cope with those risks, he said Korean exporters have to seek advanced manufacturing and adopt digital technology.

“Korea has robust infrastructure as well as advanced digital technology and excellent talent. If Korea embraces the innovation of future industries, it can be a game-changer,’’ he said.