[ The Korea Herald – Send E-mail ]
Korea aims for top start-up accelerator nation
By 손지영
Published : Jan 27, 2016 - 18:13
Updated : Jan 27, 2016 - 20:42
The Korean government on Wednesday announced a set of new plans to support start-ups and encourage entrepreneurship overall with aims to become one of the top seven start-up accelerating nations by the end of this year.

The Ministry of Science, ICT and Future Planning unveiled its 2016 work plans that, among other things, aim to vitalize the start-up sector and support research and development projects for ICT, science and biotechnology.

The ministry did not specify the budget for the plans but said it would come up with more detailed plans in the coming months. 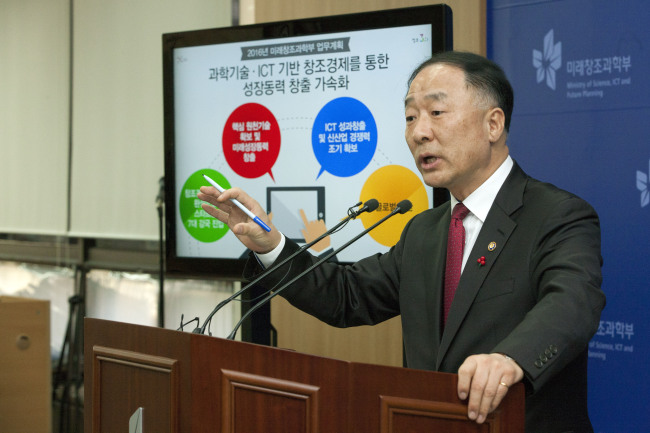 Hong Nam-ki, First Vice Minister of Science, ICT and Future Planning, announces the ministry’s work plan for this year at the Government Complex in Gwacheon, Gyeonggi Province, on Wednesday. (MSIP)
With the new plans, the ministry said it would complete the work to build the eco system for the Park Geun-hye administration’s creative economy initiative within the year.

As part of the plans, the ministry said it will set up job centers, dubbed the “Employment Zone,” at each of the 17 Centers for Creative and Innovation -- start-up incubating centers established together with big companies, including Samsung, LG and SK, over the past year nationwide.

The zones will help connect talented job seekers with employers and offer job-training programs for them.

The so-called “Regulation-free Zones” are also expected to be run through the centers to speed up the commercialization of new technologies while encouraging partnerships between conglomerates and smaller firms for R&D projects.

Operating mentoring programs and refurbishing the Creative Economy Town website, an open online platform to develop ideas into businesses were also included in the plan to energize the start-up world.

The Korean Innovation Center, a state-run start-up accelerator located in Silicon Valley, Washington and Europe, will help more than 120 start-ups to attract $5 million in funding from global venture capital firms this year while beefing up business support programs.

The ministry will also put weight on nurturing software developers. It will increase the number of schools specialized in software education from 160 last year to 900 this year, and work with 13 universities, up from eight last year, to run intensive curriculum for software.

Aiming to support Korean firms to tap into the global markets, each innovation center will run their own programs tailored to each regional and business condition, including launching English websites for entrepreneurs, and connecting the state-run export and import agencies with SMEs.

The ministry will select 40 foreign start-ups, which hope to infiltrate into the Korean market, and support them to run businesses here.

Taking a “select-and-concentration” strategy in funding R&D projects, it will invest in a total of nine industrial categories, including ICT and software, life science and health care, energy and natural resources, and aerospace and marine sectors.

It also vowed to cut red tape for researchers, saying it will streamline administrative processes in receiving state R&D funds, for example, by eliminating the final evaluation step for small projects whose total costs do not exceed 150 million won ($125,000) and reducing paperwork in applying for the funds.

For a better research environment, the period of support programs for basic research conducted by individuals will be extended for up to 10 years from the current three years, according to the ministry’s work plan.

The ministry and government aerospace institutes will start to work earnestly on a lunar exploration project this year by investing 20 billion won in developing core technologies for projectiles.

They will set out a roadmap later this year to export next-generation midsized, or 500-killogram class, satellites.