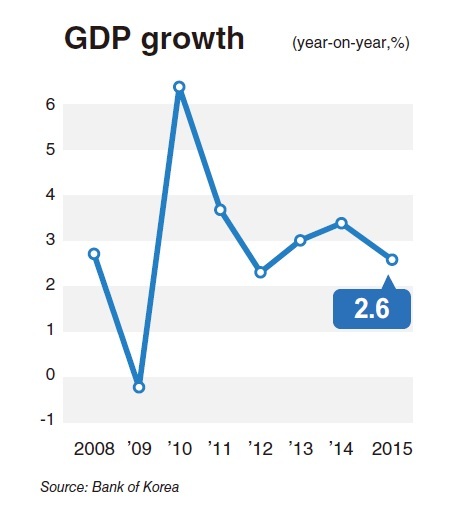 The ailing South Korean economy grew 2.6 percent in 2015, the lowest in three years, largely due to slumping exports and manufacturing, the central bank said Tuesday.

The nation’s fourth-quarter gross domestic product rose 0.6 percent from the previous three months, according to the Bank of Korea’s preliminary report.

Private consumption grew 2.1 percent, up from the 1.8 percent in the previous year. Construction investments grew 4 percent, a large leap from the 0.6 percent growth from a year ago.

By economic activities, growth in manufacturing also slipped from 4 percent to 1.4 percent and services from 3.1 percent to 2.8 percent. Growth in the agriculture and fishing sector swung to minus 0.6 percent from 2.6 percent the previous year.

As regards the fourth quarter, the central bank said that private consumption accelerated and export growth swung back to positive, yet the considerable fall in construction investments pulled down the overall quarterly growth.

The report came after the central bank on Dec. 14 slashed its growth outlook for 2016 to 3 percent from 3.2 percent, citing soaring household debt, volatility in the China market and low crude oil prices.