“We will remove all obstacles that have hindered economic growth and job creation,” Yoo said in his first ministerial meeting with economic bureaucrats on Thursday. “The government will also try to reinvigorate the entire economy by reviving consumption and export.” 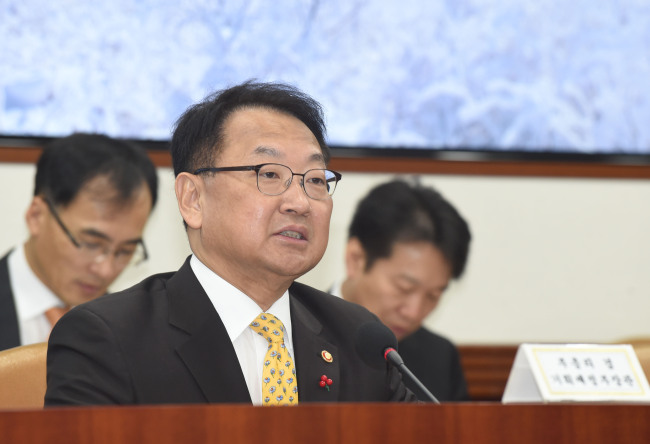 Financial Minister Yoo Il-ho attends his first ministerial meeting with the chief economic bureaucrats at the Government Complex in Seoul on Thursday. (Ministry of Strategy and Finance)

Yoo, who doubles as deputy prime minister, picked creation of jobs as the highest priority of the country’s economic agenda.

The minister also said he wants to “put up palpable achievements that all people can see” this year by completing the state-led four major reforms -- encompassing labor, public, finance and education sectors -- foster new sources of growth through creative economy and revive the economy by boosting domestic demand and exports.

Enumerating the ministry’s first-quarter agenda, the top economic policymaker said the government will make all efforts to gain parliamentary approval for the labor reform and economic stimulus bills in the extraordinary session in January.

In February, the ministry is slated to unveil a set of measures to support industries with high growth potentials, such as sports-related businesses, goods-sharing services and bio-health. The February plan is part of the current administration’s push for creative economy, as the country’s manufacturing-led economy loses momentum for growth on weak global demand.

In March, the ministry will launch a comprehensive set of measures to foster promising commodity industries, such as cosmetics, agricultural products, baby care products and fashion-related products, to boost Korean exports to China. Yoo said the March plan aims at taking full advantage of the Korea-China free trade agreement, so that local companies can increase their presence in the Chinese commodity market worth $6 trillion.

The meeting came eight days after Yoo’s inauguration as finance minister on Jan. 13, a period that has seen less-than-healthy economic developments, both at home and abroad. China, currently Korea’s largest trade partner, said its economic growth slipped below 7 percent in 2015, while the International Monetary Fund lowered the global growth outlook in 2016 from 3.6 percent to 3.4 percent.

However, Yoo said Korea will do its best not to “let the recovery momentum die out,” vowing to continue rolling out additional support measures in all sectors to boost exports this year.

“We are expecting ample large-scale deals (with Iran) in construction and shipbuilding,” Yoo said, stressing that “beating (international) competitors in reentering the Iranian market will bring precious opportunities to overcome slumping exports.”

The ministry estimated the Iranian construction market, of about $29.9 billion in 2015, will grow to $43.6 billion in 2017, citing data from the International Contractors Association of Korea.