[ The Korea Herald – Send E-mail ]
[Eye interview] Breaking free of the Korean dream
Filmmaker Do You-jin hopes Koreans welcome digital nomad lifestyle
By KH디지털2
Published : Jan 15, 2016 - 14:53
Updated : Jan 16, 2016 - 14:41
The Korean dream, a highly competitive pursuit of the masses, is so deeply entrenched in the collective consciousness that there is hardly room for deviation: Study day and night to get great test scores, enter a top university and land a job at one of the country’s major conglomerates.

Each year, thousands of new graduates enter the chase for positions at Samsung and Hyundai, a socioeconomic sign that they’ve “made it.” Those who succeed then begin a decades-long rat race up the corporate ladder, fulfilling someone else’s vision. Work, eat, sleep, repeat, week after month after year.

This was the question Do You-jin asked when she returned to Seoul in 2013 after studying at a Chinese university and then interning in San Francisco. She watched her friends work tirelessly to build up their “spec” qualifications with certificates for skills they’ll never need, only to succumb to part-time jobs at McDonald’s as they slipped further into debt. 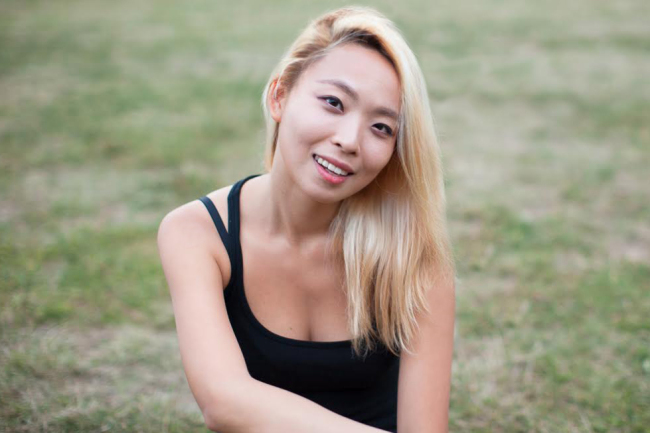 Documentary filmmaker Do You-jin (Xiufen Silver)
Do, who claims an “ordinary” upbringing, also grew up believing in that dream. It was common for her peers to work through the weekend or overtime every day -- no matter what they were paid, or what type of job they had, their lives were exactly the same. She thought it was normal until she studied abroad, learned Chinese and English, and opened her eyes to a new world, she said.

While her peers complained about hating their jobs, she refused to accept that it had to be this way.

“They have huge tuition debt, and they keep borrowing money from the government, the bank and their parents. … They are doing interviews every day, they are writing resumes, but it’s not sustainable anymore,” she said of her friends’ lifestyle.

“There is a lot of amazing stuff (in the city). … You can stay the rest of your life in Seoul if you like,” she said in a video interview from the Netherlands. “But the thing is, think about it -- is that choice made by yourself? Is that choice your own?”

The Korean dream, which has motivated young students for decades, has become just that -- a dream. Youth unemployment reached a 15-year high in 2015, and even those with master’s degrees struggle to find work. Meanwhile, Seoul is suffering from taking on the economic weight of the country as half the population has packed into the capital region to find jobs, and the government is at a political impasse over labor reform measures.

In a country with notoriously long working hours and the OECD’s highest suicide rate, structured guidelines don’t work anymore, Do said. Like in many middle and large-power countries, the job market is changing, and full-time jobs are becoming scarcer. Young people don’t pursue getting big houses, cars and their parents’ dream -- because they can’t. Rising city prices and the automation of noncreative jobs, she added, will squeeze the job market.

Do, 27, wants to show her peers that there is another way to live. For the past year, the former journalist for Korean start-up news outlet Venture Square has traveled some 15 countries from Southeast Asia to Estonia and Panama to work on her crowdfunded documentary project “One Way Ticket,” which explores the lifestyles of those in the tech industry who choose to work remotely, often for themselves.

“I think most people in South Korea don’t know that there’s another option,” she said. “If you’re good enough to live in Seoul, you can do almost everything. They are just underestimating themselves.”

They are called digital nomads, and the movement of uncounted vagabond tech experts working while traveling has long been an accepted lifestyle in many Western cultures. Companies such as Buffer and Toptal have mostly remote workforces, including nomads all over the world. But on her mission, Do has met very few Asian nomads since she left Korea in early 2015. 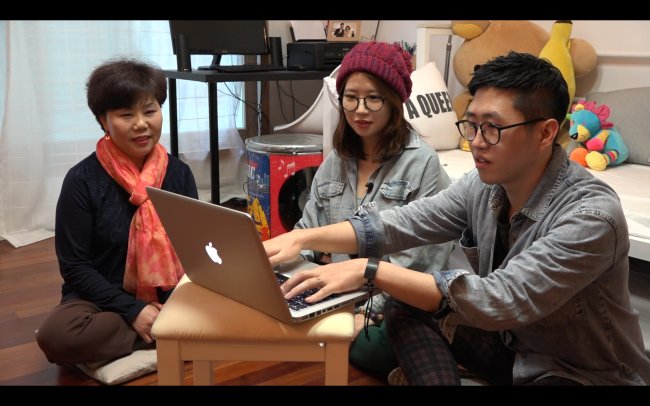 Jeon Je-woo (right) and his wife Park Mi-young (center) present their plans to Park‘s mother in Do You-jin’s “One Way Ticket” documentary. (Do You-jin)
For Jeon Je-woo and his wife Park Mi-young, who were alumni of prominent Korean universities and leaving great jobs at conglomerate affiliate SK Telecom, gaining the approval of their parents was necessary. In Do’s documentary, Jeon comments: “If I can’t convince the people closest to me, who would I be able to convince at all?”

The couple presented their budgets and plans to Park’s mother, who finally conceded.

“They had such plans and were in the process of working toward it already, I couldn’t find a solid reason to oppose them,” the mother says in the documentary. “As a parent, I didn’t feel it was right for me to get in their way.”

The hesitance is not only in Korea. Do believes the deeply traditional hierarchies and importance of family keep people across Asia from going out on their own, on top of the fear of job insecurity in departing from the white-collar status quo.

Most of the salarymen she interviewed in Seoul called the idea of remote working impossible and even “absurd.” Her friends would also make excuses such as not being talented enough or good enough at English, but in an era when positions at Korean conglomerates are so competitive that Samsung and Hyundai must make their own rigorous standardized tests, Do believes nomads have an easier time finding jobs.

Do noted that while many Western countries are very familiar with the digital nomad lifestyle, Koreans have never even heard of the concept, much less started a dialogue about it.

She said she gets many emails suggesting that her documentary should feature more of the nomads outside of the young, white techy male demographic, but she doesn’t want to turn it into a film about diversity for the sake of it. 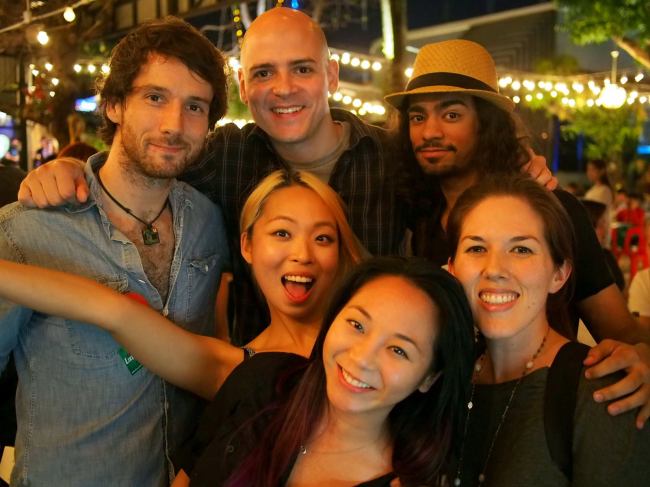 Do You-jin (center) poses with digital nomads in Thailand. (Do You-jin)
“Featuring more diversity in my film has been a goal during my journey, but also from time to time it comes to me as a pressure as well,” she said. “I realized showing the current reality is the best way to make people think about diversity. I think showing the reality where we are makes a stronger point than showing a skewed view in favor of marginalized groups, because it shows the problem as it is.”

She continues to get pessimistic comments from readers of her blog posts and articles in Korean media, especially on the subject of remote work. People have the misconception that the lifestyle is only about traveling -- but she argues that it’s rather about having the freedom of location, which impacts one’s quality of life.

"It’s easier than I thought to live this way. I don’t have to worry about my accommodation and food. Every day is a new opportunity,” she said.

She hopes her documentary will not only explore the social, economic and cultural factors that have made the digital nomad lifestyle possible, but also how these factors have been influenced by this new generation of workers.

The film is produced not for nomads, but for everyday viewers. She wants to show them that the lifestyle is not exotic or a fairy tale. Nor does she promote it, she said. She just wants to show that even if digital nomads end up being a crazy, radical example of how division of work is changing, this lifestyle is becoming more and more feasible.

“One of the more personal reasons of making this film is that I really hope to see this movement happen in my own country, South Korea, because I think it needs it,” she said. “Even though Asia is slightly behind, more and more people will start questioning why we should commute to same place every day as everyone works online anyway.”

As a nomad herself, she has no immediate plans to settle back down in Seoul -- although she admits missing Korean food. She will, however, return to Korea to wrap up the documentary in spring, and plans to release “One Way Ticket” soon after for free through various channels.