South Koreans gathered across the street from the Japanese Embassy in Seoul on Wednesday to condemn Seoul and Tokyo for sealing a deal over Japan’s sexual enslavement of Korean women without consulting the victims or gaining their consent.

Enraged by what they called political collusion between the two countries, nearly 1,000 people jammed into a narrow downtown street to participate in the 1,211st weekly rally held by the former sex slaves and their supporters. 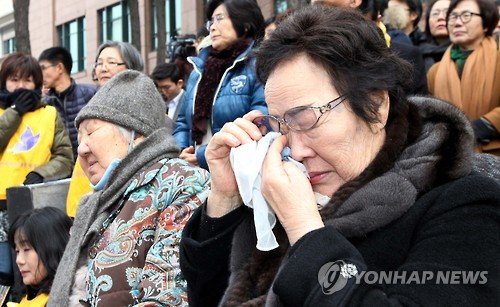 (Yonhap)
The Korean Council for the Women Drafted for Military Sexual Slavery by Japan has staged the rally for nearly 24 years to demand Japan’s acknowledgement of its responsibility for forcing up to 200,000 young Korean women into sex slavery and legal compensation.

But Monday’s much-hailed settlement was far from what the victims and their rights groups have cried out for, they say.

“What sins did we commit? Our only sin was that we were brought up as a daughter of this country. Why did I have to serve as a sex slave?” 88-year-old victim Lee Yong-soo shouted at the rally, shedding tears.

“We have cried out for an official apology and legal compensation from Japan for all these years, but Japan still denies its wrongdoing,” Lee said, calling herself “living proof” of Japan’s atrocities.

Lee also lashed out at her own government, saying she cannot trust Korean authorities.

“This country killed us one more time. We were not informed at all about the deal. However old and powerless we are, we cannot just die like this,” she said. “As long as you are here to support us, our fight will begin again here.”

The Wednesday rally began at around noon with a silent tribute to nine of the euphemistically called “comfort women” who died this year. Out of 238 Korean victims who came forward, only 46 are still alive, with their average age at 89.

The participants in unison pledged not to forget about the pains the victims had to endure for more than two decades, with many of them holding photos of former comfort women and placards reading “Protect girls” and “Opposition to the relocation of the comfort women statue.”

“I couldn’t stop crying after hearing about the ridiculous deal. I don’t know who the foreign ministry is working for,” said 41-year-old activist Park Hee-jin, who has attended the rally more than 10 times. “If the government fails to protect us, then we should protect each other.”

The demonstration, swelling with more people than usual following Monday’s diplomatic settlement, came amid growing criticism that the Korean government failed to represent the interests of the victims.

But the victims and civic groups lamented that the Korean government did not consult with them in advance and that Japan had refused to recognize the deal as legal compensation for past atrocities.

Despite the international community hailing the settlement, Cornelia Schmidt was not convinced as to whether the victims’ grievances were really healed through the deal.

“The deal Korean government made with Japan doesn’t seem to solve the issue,” the 23-year-old German student said. “I cannot blame Japanese people, but I think their government should make more efforts to make up for what they did in the past.”

Many of the crowd were seen paying a tribute to the life-size bronze statue of a young girl representing a comfort women sitting in front of the Japanese Embassy. They put gloves, scarves and blankets next to the statue in a gesture to make it feel warm and less lonely.

The bronze statue, built in 2011 by victims and their supporters in front of the Japanese Embassy, has sparked fury from Tokyo, leading it to pressure Seoul to remove the statue.

South Korea has indicated it would try to relocate it through consultations with relevant civic groups as part of the deal, adding fuel to the public backlash.

In a survey conducted by pollster Realmeter, 66 percent of South Koreans opposed the relocation of the statute, while 19 percent favored it.

Cho Hye-won, 45, led her child to cuddle the statue ahead of the rally. “I brought my child because he needs to learn that this is history we should never forget nor repeat,” she said. “For that purpose, the statue should stay here.”

Earlier in the day, a union of civic organizations and students groups held press conferences to voice their objection to the settlement, denouncing it as indulging Japan.

Some of the opposition lawmakers from the main opposition The Minjoo Party of Korea also joined the rally, paying their respects to the victims and raising their voices against the settlement.

The council for the victims said it plans to launch a global campaign to bring justice for the human rights abuses by Japan by continuing to hold the rally every Wednesday in front of comfort women statues across the nation.