[ The Korea Herald – Send E-mail ]
Korea’s first-ever multicultural library faces shutdown over budget shortfall
By 이현정
Published : Dec 23, 2015 - 16:49
Updated : Dec 23, 2015 - 17:18
On the second floor of an old building in Dongdaemun-gu, eastern Seoul, children sit scattered around the floor of a small library, reading. Behind them are walls of bookshelves filled with colorful books. In the next room, others play board games, while in the third room a small group of children intently watch volunteer teachers instructing them how to make creative objects out of large board papers using scissors and glue.

“I come here every day after school. I usually read books or play with friends here,” said a 9-year-old surnamed Choi. For him, the small library has become his second home after school.

While this cozy retreat for children may be common at other libraries, there is something unique about this one. It is the country’s first-ever “multicultural” library. 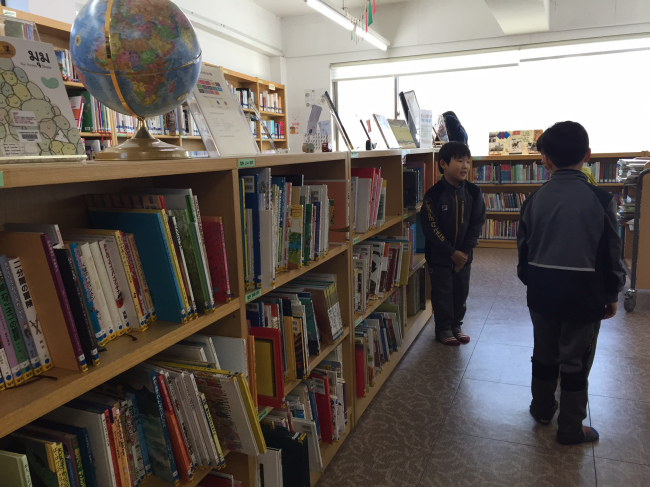 Library Modoo in eastern Seoul (Lee Hyun-jeong/The Korea Herald)
The 166-square-meter private library Modoo, opened in 2008 by regional civic group Purun People offers more than 13,000 children’s books. Of them, about 8,000 are in languages from 20 other countries, the largest such collection in the country. They include books from China, Japan, Russia, Mongolia, Vietnam, Bangladesh and others, according to Purun People.

The library attracts about 1,500 visitors a month on average, mostly children. Of them, about 30 to 40 percent are foreigners or multicultural, it added.

Modoo has been more than just a library for both neighborhood residents and multicultural families in the city, as it has served as a place to hang out, relax and feel at home.

“This space is where Korean and multicultural mothers connect with each other and mingle. Their cultural distances gradually narrow by having a place to interact with each other,” library director Moon Jong-seok told The Korea Herald.

“My favorite comment from visitors is that they see no racial barriers in the library.”

The library runs various programs, such as free Korean language courses for foreign mothers and book-reading classes for children, with the help of about 50 volunteers. Native mothers or foreign volunteers read books written in their language. Volunteers also visit multicultural families to introduce the library’s free programs. 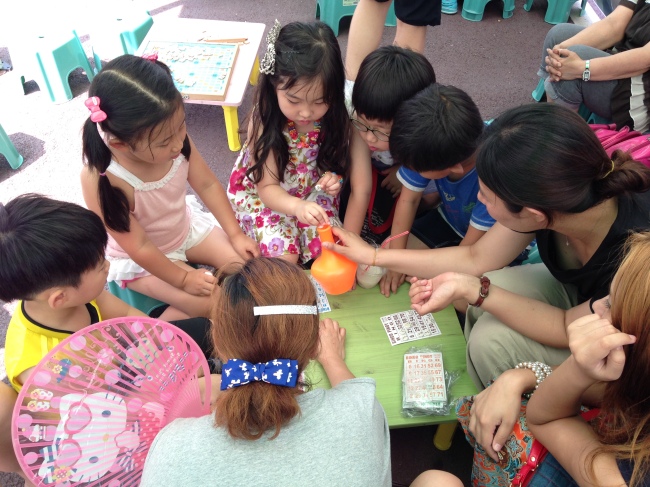 Children participate in a class with volunteers at library Modoo in eastern Seoul. (Modoo)
Since 2009, it has also hosted a fairy tale storytelling contest where participants tell tales in their mother tongue every year so that Korean and multicultural families can share their respective cultures.

As most library visitors are lower-grade elementary school students, cultural bonding among children can often be observed over time, the librarian said.

“Not only do the programs raise the awareness of multicultural families, but they also allow the children to broaden their perspective as they get exposed to diverse people and thoughts,” said librarian Jang Ji-hyun, who has been working at the library for more than two years.

The birth of the country’s very first multicultural library incubated six similar institutions in other cities, including Ansan in Gyeonggi Province, Daegu and Busan.

However, despite its positive impact and achievements over the past seven years, the library is facing shutdown due to budgetary realities.

Up until this year, Modoo had been able to stably operate thanks to various donations, library officials said.

The library, however, faced financial difficulties in 2013, as the major sponsor company went bankrupt.

It luckily found new sponsors with the help of the Seoul Metropolitan Government, which connected the library with about 20 construction companies for financial support. Under a two-year contract, each company offered about 3 million won a year.

With subsidies from the companies and private donations, along with its own efforts to save costs, the library has been able to stay open for the past two years.

As the two-year contracts near their end, however, the library is likely to face financial hardship from next year, library officials said.

“There are no financial backup plans for now, except for the donations from regular library users and public fund from the Seoul Metropolitan Library,” Moon said.

Despite strenuous efforts to minimize operating costs, the library needs at least 4.6 million won a month to stay open, which includes a monthly rental fee of 2 million won and the salary of one librarian, the only paid employee, he said.

The only secured funding from next year is a yearly public subsidy of 2.5 million won from Seoul Metropolitan Library under Seoul City. This is the largest amount the institution can offer due to regulations, city officials said.

About 380 individual donors are also expected to provide about 1.9 million won a month as well. But this still falls short of the monthly rental fee, Moon added.

Although the library director requested further support from the city government, the city was unable to offer more help, citing the lack of budget and fairness in financing other libraries as well.

Six other multicultural libraries have faced similar financial challenges before. In these cases, each municipality either provided a permanent free space to help solve rental fee problems or made the library public to fully support them.

Purun People has also suggested that Seoul City accept the library and take it over for better sustainability. The city, however, has again been reluctant, citing a resource crunch.

“By public donation the donors can support the basic necessities of the library. I hope the city government can somehow play a role to keep the library for the sake of public interest,” the director added.

Meanwhile, as part of its efforts to solve the financial problem, Purun People is gearing up to launch a fund-raising campaign.