[ The Korea Herald – Send E-mail ]
Sex trade exploits legal loopholes in South Korea
Sex industry targeting married couples, women and LGBT individuals thriving in Korea
By 이다영
Published : Dec 15, 2015 - 18:19
Updated : Dec 15, 2015 - 18:20
It’s been some 10 years since South Korea enacted its antiprostitution law, but new forms of sex trade have continued to evolve through legal loopholes, including sex services for women and overseas prostitution. With the law vocally opposed by an increasing number of sex workers, its efficacy has constantly been questioned. The Korea Herald is publishing a three-part series shedding light on the hidden side of Korea’s sex industry. The following is the second installment. – Ed.
When Lucien Lee, a South Korean transgender woman, met her blind date back in 2012, she didn’t think it would turn into her first sex work opportunity. Her date was a man in his 30s who misunderstood their gathering as being for a mutually agreed-upon sex transaction.

Lee is currently a university student majoring in law and working part-time as a self-employed sex worker while living with her parents. She is also one of many Korean sex workers who are vocally against the nation’s antiprostitution law, which criminalizes both the selling and buying of sex.

As a transgender woman who is also a lesbian, Lee said the current law is based on a stereotypical notion that most sex buyers are men while sex workers are women, which does not reflect and grasp the reality of today’s sex industry in Korea where services for women and the lesbian, gay, bisexual and transgender community also exist and are thriving. She also added that the law fails to protect sex worker’s rights, especially when they are abused or exploited by their customers or employers. 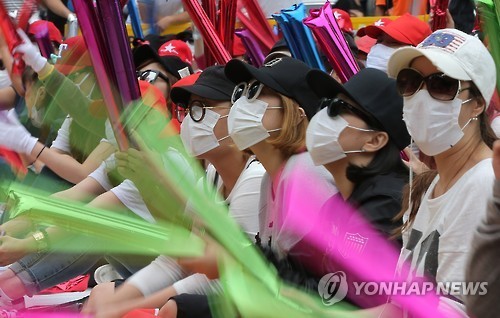 Members of a group supporting women’s human rights hold an event to commemorate the 11th anniversary of the antiprostitution law in Jeonju on Sept. 24. South Korean sex workers participated in a rally in central Seoul on Sept. 23 in protest of the antiprostitution law that has criminalized the sex trade since 2004. Yonhap
Lee, who is still legally classified as male, identifies herself as a transgender woman and a lesbian, and most of her clients are male. Some included married couples who wanted to have a threesome. “It makes the work easier for me,” Lee said. “(Having male clients while being a lesbian) eradicates the possibility that I may develop personal feelings for my clients. I would not want that.”

In 2013, Lee couldn’t report to the police when she was sexually abused by a male teenager, who threatened to report her to authorities if she did not have sex with him for free. Since receiving hormone replacement therapy in 2012, she has been struggling to find other part-time jobs to support herself as a student. “As long as sex trade is illegal, sex workers cannot rely on government protection,” she said. “How can you report the abuser to the police if doing so can risk your own career and source of income?”

Park Sung-jun (not his real name), 43, has been working as a male sex worker since the 1990s. He now runs his own sex business targeting female clients only, which he claims is one of the biggest in the country.

Park’s business mainly offers massage service for women, but often includes sexual intercourse. Reservations are done via KakaoTalk -- he has more than 2,500 client phone numbers saved on four mobile phones -- and the client and her male “therapist” meet at a motel room. Sometimes, clients ask to spend all day with a specific therapist. The “therapist” can get paid for watching a movie with the client or going on a day-trip away from Seoul -- sex is just optional. Clients are from all age groups and types -- married, single, widowed and divorced.

“I think women clients feel more comfortable when they pay for sex than having a one-night stand,” Park told The Korea Herald. He said women can be just as sexually curious and adventurous as men.

“Many would go, ‘Oh my god, I must be crazy. What am I doing?’ after having sex with a stranger. But there’s something about paying money for sex. It’s just a service you paid for. You don’t’ feel as bad about yourself. And once you become close with the therapist, you want to pay for the emotional intimacy.”

Park explained there is also an industry that only targets lesbians and gays that is booming behind closed doors. Once, Park had a lesbian client who wanted to try having sex with a man only to confirm her sexual orientation.

In person, Park showed how easy it is to find such services online through local search engines by using simple search terms such as “massage for women” and “women only,” which are in fact secret words for sex services for women by female workers.

“Most people don’t know these sites are for sex services because ‘massage for women’ doesn’t sound like anything sex-related,” he said. “If the government is really determined to end sex trade in the country, I think the only way to do it is to ban the Internet. But of course, that’s impossible.”

Park said male sex workers working for male clients are practically invisible to the authorities, who “simply don’t guess” that men can be involved in sex work targeting gay men or women. “That’s why male sex workers targeting gay men work at off-line brothels -- whereas every other service involving women workers or clients is arranged online and takes place in motels -- because they don’t have to worry about crackdowns,” Park said. “The authorities don’t think there is any sex trade going on when there is no woman in the building.”

When approached by The Korea Herald, the Gender Equality Ministry seemed to be unware of the existence of the nation’s sex industry targeting the LGBT community.

Prior to receiving her hormone replacement therapy, Lucien Lee had worked part-time for a parcel delivery company. As a dock loader, she would take a bus at 6 p.m. to Daejeon, where the distribution center was located, and load thousands of parcels to trucks for delivery. Food was provided by the company, but Lee doesn’t remember having any good meals there. “The bean sprout soup had no bean sprouts in it. It was just water,” she said.

The work was hard. She could barely find a moment to sit and rest at work, which usually lasted until 8 a.m. the next day. For about nine hours of labor, she was paid 80,000 won. For her first sex work, which took just a few hours, she was paid 100,000 won. As of this year, Korea’s minimum wage stands at 5,580 won an hour.

After receiving hormone replacement therapy, getting a part-time job has become even more difficult for Lee due to her sexual identity. She appears to be and identifies herself as a woman, but she’s still a male according to her legal documents including her ID. Legally changing one’s gender in South Korea can be costly and tedious, as it requires medical operations that are not covered by the national health insurance. Lee hasn’t filed her request to the court yet.

According to a 2006 report on human rights conditions on South Korean transgenders, written by local nongovernmental organizations, the vast majority of MTF (male to female) Korean transgender people work in the “entertainment industry” or as temporary or part-time workers.

“I think working in the ‘entertainment industry’ practically means working as sex workers,” said Lee. “Even if you work at bars, if you don’t go to the ‘second rounds,’ which means sex service, the chances are you won’t even get paid the minimum wage.”

Professor Kim Yong-hwa at Sookmyung Women’s University, who claims the law should be revised so that sex workers should not be punished while sex trade should still be banned, said prostitution ruins a woman’s dignity and sense of morality. In her report submitted to the Women’s Human Rights Commission of Korea, she defined South Korea’s sex industry as a “market serving men.”

“The reason prostitution (of women) continues to exist is because the demand from men never goes away,” she wrote in her report. “But prostitution violates women’s human rights and diminishes a society’s moral character.”

The Korean government stands firm on its stance that the commercial sex trade cannot be legal. Gender Equality Minister Kim Hee-jung said earlier this year sex was “something that cannot be sold and bought.”

Lee said sex work deserve to be recognized as labor. “I think many (Korean) women politicians who claim themselves as feminists grew up in a life of privilege,” she said, adding that sex trade should be legalized with due government regulations.

“I don’t know what ruins one’s dignity more -- sex work or living without a job or not being paid minimum wage while being a contract worker. Some say all sex workers are forced to work as sex workers. But when you think about it, who isn’t forced to work? Most people work not because they enjoy it, but because it pays and they need to survive. This applies to every job, not just sex work.”


According to Park, being a male sex worker isn’t easy. It often requires smashing Viagra pills into powder and mixing it with sports drinks. The drink the concoction before work to make sure they can satisfy the clients.

“It’s tough work,” he said. “It’s about being professional -- treating clients with the utmost care and making sure they get what they want from you.”

While his business is also illegal according to the current law, Park claimed that by not recognizing women as sex trade clients, the authorities are failing to see potentially more serious crime cases in the industry.

“I make sure my workers get tested for STDs every week,” he said.

“Once one of them tested positive, I made sure I informed every single client who received services from him. I think that’s the ethical way of doing business. But I’m not sure if other people involved in this business do what I do.”

Aside from sexually transmitted diseases, he has also heard of male sex workers taking video footage of the clients’ bodies while giving a back massage. He’s even heard of a case where a sex worker used his client’s personal information for blackmail to get more money.

Park also heard a number of cases where the “therapist” end up raping the client by not controlling his own sex drive, when the client actually only wanted a massage.

“The world has changed so much,” he said. “I don’t know why so many government policies are all still so male-oriented.”


By Claire Lee and Suk Gee-hyun