Han, chief of the Korean Confederation of Trade Unions, was taken to Namdaemun Police Station for questioning Thursday as he voluntarily walked out of Jogyesa Temple in central Seoul, where he had been taking sanctuary to avoid arrest for 24 days. 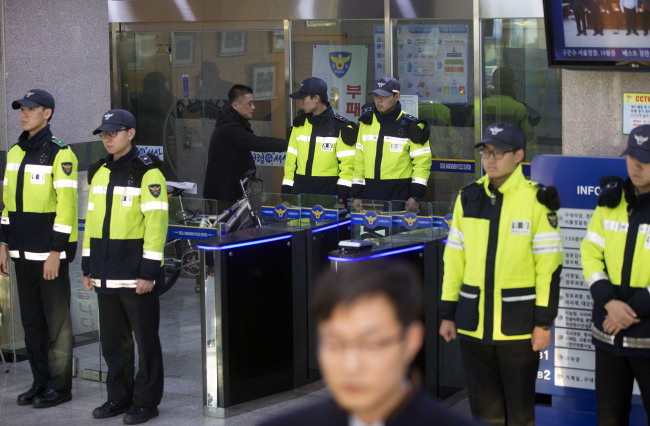 Police questioned Han overnight for a total of eight charges, four of them related to the Nov. 14 rally in central Seoul that saw clashes between the police and protestors.

In South Korea, an arrest warrant can detain a suspect for up to 48 hours for questioning, then police need a formal detention warrant issued by the court to further take the suspect into custody.

The police accuse Han of holding a banned rally, staging a demonstration in an unpermitted place, disrupting traffic, disobeying the police order to disperse, damaging public property and obstructing the execution of police duties in nine protests held this year.

Police are considering additionally charging Han with allegedly inciting violence during the Nov. 14 rally and plotting to pose a threat to public security, which carries a sentence of up to 10 years in prison and a financial penalty of up to 15 million won ($12,700).

The decision is set to be made after a detention warrant is issued for Han, police officials said.

“There are already too many things to investigate to apply for a detention warrant, so it is not realistic to consider adding the sedition charge right now,” a police official said prior to seeking the detention warrant.

It has been rare for prosecutors to file sedition charges against protestors. The last time prosecutors applied the charge was in 1986 during the authoritarian Chun Doo-hwan administration when pro-democracy activists threw rocks and firebombs at riot police.

Han has remained silent during the probe, the KCTU said in a statement, in the face of what it called a malicious investigation. It said that the police tried to steer the probe in an unfair direction for its leader by accusing him of mobilizing labor union members capable of organizing violent demonstrations. Han has been staging a hunger strike for 12 days.

Following the chief’s arrest, the KCTU renewed its pledge to stage an all-out strike on Dec. 16 to oppose the government’s push for labor market reform bills. Another antigovernment street rally is scheduled in central Seoul for Dec. 19.

The probe into protestors suspected of committing violence during the Nov. 14 rally has picked up pace, with police having raided the KCTU local branches to collect evidence. So far, police have investigated 731 people related to the Nov. 14 rally, detained 10 and booked 204 without detention.

One of the detained is the head of the nation‘s democratic taxi labor union, identified only by his surname Koh, who allegedly smashed windows of police buses and attempted to set fire to the buses.

With its chief being detained for police investigation, Choi Jong-jin, a deputy chief of the labor union, will serve as the acting leader, the KCTU said.

The government has claimed, on the other hand, the measures are necessary to ease labor regulations, boost the economy and create jobs for the young.

At the National Assembly, the rival parties continued to lock horns over the five labor market bills.

The ruling Saenuri Party has presented the bills related to labor conditions, insurance for employment and industrial accidents, and temporary workers.

The bills stipulate a reduction in working hours, improvement in benefits for the unemployed, extension of hiring of irregular workers, expansion of sectors that can employ temporary workers and adoption of the peak wage system.