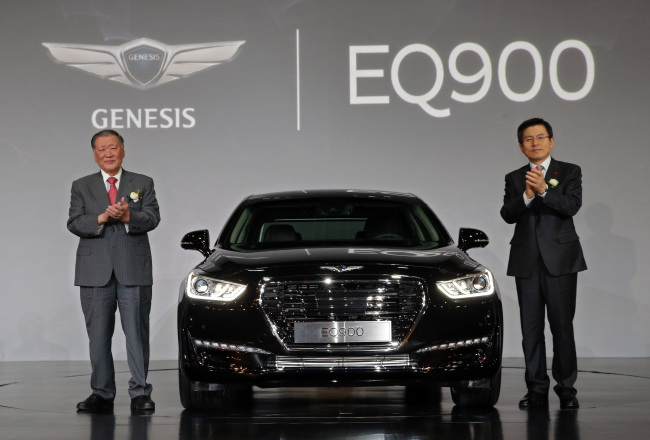 Prime Minister Hwang Kyo-ahn (right) and Hyundai Motor chairman Chung Mong-koo applaud Wednesday at the launch of the Genesis EQ900 in a Seoul hotel. Yonhap
With the launch of EQ900, the first model of its newly launched luxury brand Genesis, Hyundai Motor is shifting gears to the luxury car market aiming to shed its image of a value carmaker and prop up falling profitability.

“The company developed the premium sedan, targeting the global luxury car market. I believe that the flagship model of the Genesis brand, armed with the company’s state-of-the-art auto technologies and high performance, can compete equally with the world’s top luxury offerings,” Hyundai Motor Group chairman Chung Mong-koo said at the launch event, held at the Grand Hyatt Hotel in Seoul on Wednesday.

“I expect the EQ900 (G90 in overseas markets) to help the automaker to enhance its brand value and to advance technological competency.”

The unveiling event of the first model of Genesis has been anticipated since Hyundai Motor vice chairman Chung Eui-sun -- the chairman’s only son and his heir apparent -- led the launch of the carmaker’s first premium brand and its growth vision on Nov 4. At the event, junior Chung promised six Genesis models by 2020, starting with the EQ900.

The ambition to take the nation’s top automaker to the high end is being taken forward by the next generation of the family. The chairman debuted Genesis, a premium car model under the Hyundai brand, in 2008 with his long-held dream to enter the global premium market. Based on lessons learned from trials and errors with the model, particularly in the U.S. market, his son took the mission to nurture Genesis into a premium brand for the firm’s future growth.

Industry watchers have backed Hyundai’s move toward the upmarket. Ko Tae-bong, a stock analyst at HI Investment & Securities, said it is the right timing for the carmaker amid pressure from cheaper rivals. “Selling expensive luxury cars can boost its sluggish profit growth,” Ko said.

Hyundai Motor is upbeat about the initial demand for EQ900. According to the company, preorders of the premium sedan exceeded 10,000 units as of Dec. 8. It is almost double the 5,200 preorders for the second-generation Genesis which debuted in November 2013.

The EQ900, equipped with such advanced technologies as a highway driving assist system, boasts of 370 horsepower and 52.0 kilogram-meters of torque. The combined fuel economy for the gasoline-powered EQ900 is 8.5 kilometers per liter.

The price of the sedan ranges between 73 million won ($61,900) and 107 million won, depending on engine types and options.