[ The Korea Herald – Send E-mail ]
‘My country pimped me to U.S. soldiers’
Former South Korean ‘comfort woman’ for U.S. military shares why she decided to sue her own government
By 이다영
Published : Dec 9, 2015 - 19:24
Updated : Dec 9, 2015 - 19:28
UIJEONGBU, Gyeonggi Province -- Near one of the U.S. military camps in Uijeongbu, Gyeonggi Province, there is an old, white cement building that now serves as a shelter for former sex workers for U.S. soldiers in the region.

For Min Su-hwa (not her real name), it is also where she was forced to get weekly checkups with painful treatments for sexually transmitted diseases in the 1980s. The building used to be a state-run health clinic for Korean sex workers who served U.S. troops, including her.

“The worst was the penicillin injection,” the 56-year-old told The Korea Herald at the shelter. “It hurt so much that it felt like my leg was literally tearing off.”

Min is one of 122 Korean women who filed a compensation suit against the Korean government last year, claiming the state collaborated with pimps to run brothels for U.S. troops from 1960s to 1980s, allowing human trafficking and other forms of abuse against the “comfort women.” 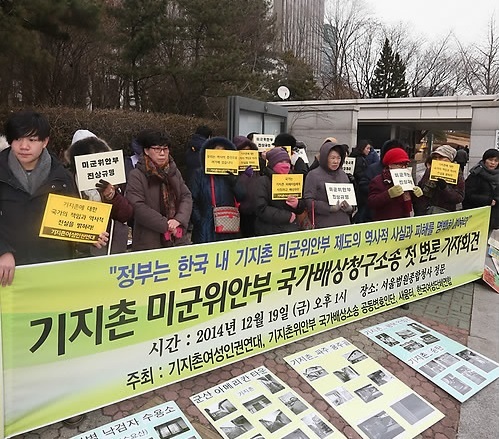 Activists hold signs in front of the Seoul Central District Court, where the press conference calling for the comfort women’s right to claim damages was held on Dec. 19, 2014. Yonhap
Suffering from aftereffects of a drug addiction she developed while working as a sex worker, Min walks while putting her weight on an umbrella, as half of her body has been paralyzed. She is currently unable to work and lives alone, relying on government subsidies for most of her income.

“What I want is a heartfelt apology,” she said. “The government didn’t treat us like its citizens. My country pimped me to U.S. soldiers.”

Min was 19 when she decided to leave home and find a job to support her family. It was 1979, and she had been working as a factory worker for about six years, right after graduating from an elementary school. As a child worker she was never properly paid. Her father was an unemployed alcoholic, while her mother worked as a construction worker part-time.

“We were so poor we always worried about food,” she said. “My older sister had already left home to work at a factory. I had two younger siblings to support. I needed a job that would give me shelter and food.”

When she visited a job placement agency, Min was told that there was a job that would give her food and a place to stay. The agency sent her to a property in Uijeongbu, Gyeonggi Province, where, upon her arrival, she was abruptly told by her new employer to put on makeup. She was then taken to a club filled with U.S. soldiers. That’s when she realized she had been sold by the agency into a brothel that exclusively targeted U.S. military soldiers stationed in the region.

“I was so scared that I had to take tranquilizer pills to work,” Min said. “I would take about 10 pills every day and soon became addicted.”

From 1979 until the mid-1980s, Min was constantly monitored by her employer, while working full-time as a sex worker. Meanwhile, everything she needed at the brothel became a debt she owed to her pimp, from hair products and furniture to food and rent for her room. Her customers – U.S. soldiers -- were not required to use protection. Instead, all sex workers were required get checkups for sexually transmitted infections once a week.

Fleeing was never an option. Not even the police would help the women, she said.

“Many tried to run away to the police station,” she said. “The pimps would just show up at the office and simply tell the police that we owed them money. And the police would let the pimps take us away.”

According to Min, the weekly health checkups were organized by the Korean government and not showing up to them meant being locked up at a separate medical facility for three to four days. Whenever they tested positive for a venereal disease, the women were forced to get penicillin injections in isolation.

The injections of the drug were so painful that some women, including Min, would purchase any antibiotics available at local pharmacies and inject themselves prior to checkups to prevent testing positive in the hope of avoiding penicillin injections.

“I heard one woman went into shock and died shortly after getting an injection,” she said.

All women were required carry a card that showed their latest STI checkup date at all times. Sometimes Korean public servants would randomly ask any woman on street to show their checkup card. If they didn’t have the card with them, they’d be forcefully taken to the nearest clinic and get another checkup, or be locked up with no further explanation.

Min argued that if the government indeed cared for the women’s health, it would have done something about the collective drug addiction, as there was no way the public servants were unaware of the problem. But no woman, as far as she knows, was offered any government help on tackling addiction, she said.

“You didn’t have to carry your identification card, but you had to have that STI checkup card all the time,” she said.

“Of course the government didn’t do this for our health. The only purpose was to make sure the U.S. soldiers didn’t get any diseases from us. Whenever a soldier’s test turned out positive, the Korean public servants would crack down on the clubs and forcefully take away whoever slept with the guy for another penicillin injection in isolation.”

Sometimes, women were physically abused by the U.S. soldiers. One woman Min knew was stabbed by her customer. Another was beaten by a customer so badly that her eye fell out. As far as Min knows, the customers got away with no punishment from the Korean authorities.

The women were also made to attend classes provided by the Korean government on various sexually transmitted diseases and their symptoms. Some public servants told Min to be “proud,” as she was doing “something good” for her country by bringing in foreign currency.

“Now I take that as ‘have your body free from possible infections and offer it to the U.S. soldiers,’” she said. “That’s literally what the government wanted from us.”

Last year, Gender Equality Minister Kim Hee-jung said the government would not comment on the survivors’ lawsuit until the ruling was made. The ministry again refused to comment on Min and others’ claims when contacted by The Korea Herald.

Yet the case is often compared with the one of surviving Korean women who were sexually enslaved by the Japanese military during World War II.

Seoul has been making repeated demands that Tokyo take responsibility and offer an apology and legal reparation for the Korean wartime victims.

Sociology professor Lee Na-young from Chung-Ang University said the two cases in fact share a lot of similarities, and the South Korean government needs to acknowledge “comfort women” for the U.S. troops as victims in order to avoid repeating military violence against women.

In her report submitted to the National Assembly, Lee noted that both the women serving the Japanese and those serving U.S. troops were enslaved to work in military-regulated brothels for soldiers only and were required to regularly get tested for STIs by state-designated medical professionals.

“Many U.S. military bases in Korea were in fact ex-Japanese military bases during the colonial rule, so it is very likely that the U.S. troops used the same facilities that were used by the Japanese for the sex trade,” Lee wrote.

Lee also pointed out in her report that while the Korean government violated the women’s human rights, many Korean civilians – such as the owners of the clubs and brothels, and those who worked at job agencies -- also benefitted from the women’s suffering.

“If the state is dispensing selective justice by ignoring the suffering of the marginalized, what does that say about us as a nation?” she said.

Right before Min quit her job and drugs due to her deteriorating health in the mid-1980s, she weighed just 37 kilograms. She had been seriously addicted to tranquilizers, which she was introduced to by her colleagues during her first year as a sex worker.

As soon as she stopped taking the pills, Min experienced sudden weight gain, which was followed by skin rashes. Shortly after her weight reached 78 kilograms, one of her legs became paralyzed. Since then, she has been in chronic pain and unable to work.

According to a report submitted to the National Assembly by a civic group that supports the surviving “comfort women” for U.S. troops, the women currently make an average of less than 500,000 won ($430) a month, with 70 percent of their income coming from government subsidies doled out for below-average income households. According to a study by Gangneung-Wonju National University, which tested 45 surviving women with an average age of 63, more than 65 percent suffered from obesity, while 57.7 percent had high blood pressure.

“I’ve been relying on opioids,” Min said. “My body has never been normal since the drug addiction.”

During her years as a sex worker, her only consolation was to be able to wire money to her mother and her siblings. To this day, her family members don’t know that she worked as a sex worker. “I lied and said I worked at a factory,” she said. “I would never tell them. It would make them feel terrible.”

One of her worst memories involves with being insulted by strangers on street, who called her yanggalbo (Western whore) or yanggongju (Western princess).

“I guess they had no idea that I did not sign up to be a yanggongju,” she said. “No one saw us as victims. We were just constantly shamed by society. Many assumed I got into the profession because I wanted to.”

She said it was only in the 1990s that she started to recognize herself as a victim.

“Before that, I’d been too busy enduring life,” she said. “I’ve never had any hopes, purpose or dreams for life. I simply endured the times. What I want is an apology for those times -- the times that I lost.”

“I’m a Korean citizen and the government had the responsibility to take care of me,” she said. “What it did was exactly the opposite of that.”