[ The Korea Herald – Send E-mail ]
‘Liberal arts education translates into better jobs’
By Yeo Jun-suk
Published : Dec 7, 2015 - 20:29
Updated : Dec 7, 2015 - 20:29
With South Korean youths struggling to get jobs amid the worsening employment rate, the nation’s higher education trend has been shifting toward practical courses like finance and engineering and away from liberal arts, which many job seekers have dismissed as irrelevant to their future careers.

But Smith College president Kathleen McCartney believes otherwise. The head the leading liberal arts college in the U.S. stressed that what students learn through flexible curriculum provided by the liberal arts classes easily translates into practical skills in the real world. 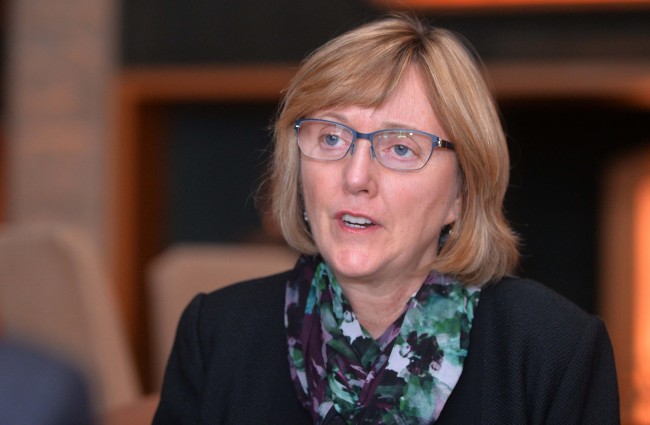 Smith College president Kathleen McCartney. (Lee Sang-sub/The Korea Herald)
“In a knowledge economy, critical thinking skills, superior writing skills and the ability to make arguments are more important than just majoring in one thing. Rote memorization is worthless. You know you will forget. If you learn how to think critically and how to write, you can take them to any sectors,” said McCartney in an interview with The Korea Herald.

“There is a lot flexibility in (liberal arts colleges’) curriculum (and) I think there are advantages to taking different courses across disciplines. You have a lot of opportunities to try out different fields.”

McCartney was in Seoul in late November as part of a tour to reach out to colleges and universities in Asia. Before taking office in 2013 as the 11th president of Smith College, she had served as a dean of the Harvard Graduate School of Education since 2006 ― the fifth female dean in Harvard’s history.

Highlighting that she thrived academically during her own undergraduate years through cross-discipline education, she asserted that small liberal arts schools are more responsive to the student’s academic demand than other large universities.

“Let’s say you want to run an art museum. It might be great to major in art history and take some courses in economics. This is especially true of liberal arts colleges. In a lot of places, you are not as free to take courses across disciplines,” the president said.

She noted that the Smith students have ample time with the faculty to discuss any issues at the beginning of every semester. She pointed out that the students and faculty often get involved in research together, encouraging the students to publish their own scholarly papers during their undergraduate years.

Referring to the strength of Smith’s unique academic program tailored to educate female leaders, she advocated women-only education, despite the criticism here that the system is an outdated one that comes from the time when women were denied equal opportunities for public education.

Decisions by some of South Korea’s women-only universities to open up graduate courses for men have recently sparked public debate. While proponents said the move would keep the school afloat amid low endowment and application rate, opponents worried it would undermine the “proud” tradition of women-only schools.

Echoing the opponents’ view, she highlighted that there were many women who want to learn from women-only schools and they can provide the students with the “rare” opportunity to exercise leadership and build confidence without subjecting themselves to the sexism that is still prevalent in co-ed schools.

“Many women are still excited about women’s education as an option. They like studying in a place where all of the leadership roles are held by women (and) the faculty attention is focused on women. So they are able study alongside other strong women like themselves,” McCartney said.

“I think there is still a lot of discrimination against women, some of it subtle. I certainly experienced it in my life and some of it is more overt. For four years you get to live somewhere where sexism is disrupted. It just doesn’t exist in Smith. You can develop confidence and take that out into the real world,” she said.

She vowed to uphold Smith’s heritage as one of the most elite women-only colleges in the U.S., highlighting that Smith College is financially stable thanks to the increase in student applications and alumnae endowments.

“We are not going to accept men into the undergraduate programs, because we committed to being a women-only college for now and in the future. There are still many women who are interested in studying at the women’s colleges,” the president said.

“Just last year, we had a 12 percent increase in applications. And in the last eight years we have seen an increase every single year. We have an endowment of $1.9 billion. Just last year, (we got) $10 million for financial aid. Our alumnae are just as generous as men who went to liberal arts colleges,” she said.

Taking issues with racism scandals that hit U.S. campuses recently, she said she was proud of those students who dared to confront social injustice. Smith College students staged a sit-in in solidarity with Yale and Missouri students, who protested against racial discrimination in their alma maters and across U.S. colleges last month.

Protests emerged at Yale amid the allegation that a fraternity there organized a “white girls only” Halloween party and reportedly denied entry to women of color. The school was also in turmoil over the debate on whether students had a right to wear racially insensitive Halloween costumes.

“I expected (the racial scandal) to be an issue because we had a lot of racialized violence over the summer. Certainly, the U.S. has significant issues pertaining to racism and is really is a function of slavery. This is a sorry part of our history,” she said.