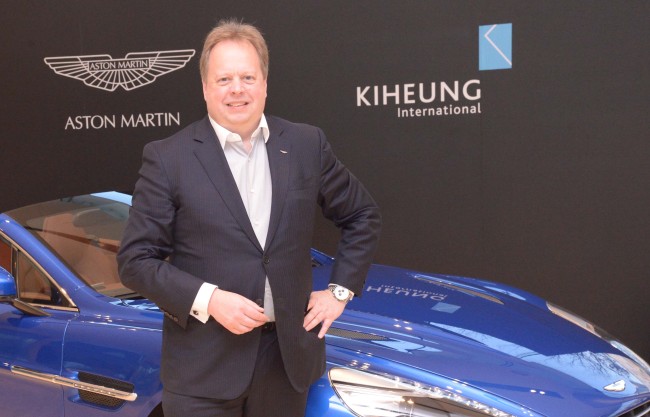 Aston Martin has been epitomized by the kind of classic, powerful gasoline cars that shout masculinity, representing some of the world’s toughest men on Earth, including James Bond.

But now the 102-year-old British supercar-maker aims to reach out to more diverse customers, particularly young, female drivers, with a more diverse lineup.

Launched in Korea in March through local dealer Kiheung International, the brand is developing sports utility vehicles and electric cars to broaden its appeal.

“Our customers are getting younger and more diverse. They used to be 55-year-olds in Britain, but in Asia they are going down to their 30s and 40s,” Andy Palmer, CEO of Aston Martin, told The Korea Herald last week.

“And with 162 dealers around the world, we are putting our efforts to meet the demands of culturally and gender-diverse people,” he said. Palmer, who took office in October 2014, visited Seoul to support the Aston Martin showroom in Banpo, Seoul, and to congratulate its official Korean dealer Kiheung for meeting its undisclosed sales goal for the year.

Palmer said the DBX, unveiled at the Geneva Motor Show in March, was more female-friendly, a huge leap from previous cars, for which 96 percent of the customers were men.

Branding the car as “a sports car in an SUV package,” the company has established a female advisory board to help the designers’ group – which is generally 99 percent male – make cars specifically fit female car owners.

“We have learned the difference in the size of the hands, feet hanging off the floor when driving … and the fact that women generally want to sit higher up to secure safety. We are trying to make sure that we track women as the customers of our products,” Palmer said, adding that 70 percent of the influencers in the car purchase are women.

Market observers expect the DBX to roll out in 2019, which Palmer refused to confirm.

“The luxury SUV market has simply never existed. Bentley made the first move with Bentayga -- which will be out in the market next year -- and Rolls-Royce is also making a long move. We won’t be the first to be in the market but not the last (either),” he said.

Palmer admitted that Aston Martin’s electric vehicle development was more challenging. He said the firm was striving to balance strong power output and battery management, while being able to race around the infamous Nuremburg Ring.

Such advancement into new, trendier territories in the automobile market can be seen as a compromise by the luxury carmaker, which made its name by producing powerful cars with its signature V12 and V8 engines.

But Palmer said the changes were necessary.

The EVs are to offset the exhaust emissions as a means to tackle ever-tightening government regulations, instead of ditching its highly fuel-consuming powertrains, he said.

The second reason is the company’s ailing fiscal health. According to reports, the company sold 3,661 cars last year and saw a loss of $108 million, about threefold from 2013, and conducted several layoffs.

Taking the examples of Ferrari and Porsche, which revitalized themselves by producing mass-market cars, Palmer expects the SUVs and EVs would reinvigorate sales and raise the company’s annual production to 7,000 units from the current 4,000.

“If we go down the numbers we’ve never been profitable. If we can be profitable, we can plough that money back to new cars: We can have the (signature) DB 11, 12, 13 … on a faster cycle,” he said.

“If you are classic and dead, it doesn’t matter anymore. You’ve got to be relevant. If you call these changes a compromise then let’s do it, because we are going to be here for the next 50, 60 or 100 years keeping the brand’s ‘power,’ ‘beauty’ and ‘soul,’” Palmer said. 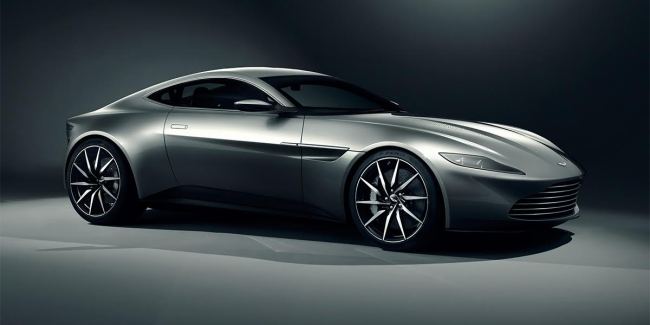 Aston Martin DB10, as known as the Bond Car in the film, "Spectre"Aston Martin

Still, Palmer remained upbeat about the future. He acknowledged that many people appreciate the “British Cool” aspect of Aston Martin -- being handsome, athletic, fashionable and luxurious, just like James Bond, a character forever associated with the brand.

He was also hopeful about the Korean market. “It is the fourth-fastest-growing market in the Asia-Pacific region. And it is open to foreign manufacturers only at the top end of the market. And the more Koreans are open to luxury, they will understand the beauty of Aston Martin,” Palmer said.