Choi Gab-soon died at age 96, after years of suffering from chronic conditions including high blood pressure, diabetes and dementia, said the Ministry of Gender Equality and Family. Choi was the ninth Korean victim of slavery to die this year.

The late victim was born in 1919 in Gurye, South Jeolla Province. When she was 15, Choi was taken by a Japanese officer who broke into her family house, initially to draft her father into the military or forced labor. 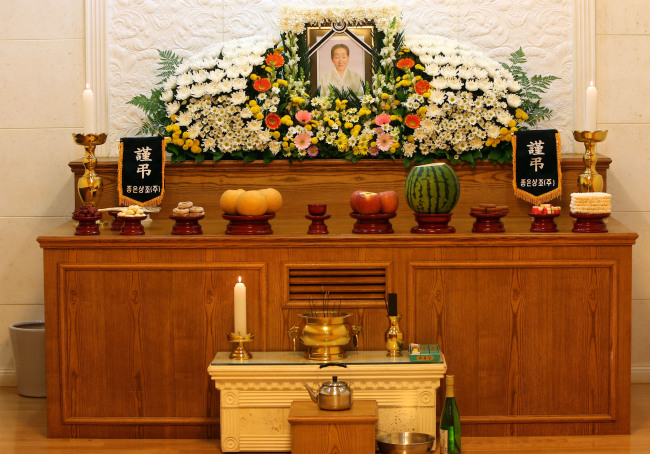 A funeral hall of the late Choi Gab-soon, who was forced into sexual slavery for the Japanese military during World War II. She died on Saturday. Yonhap
Choi was forcefully taken instead of her father, who had to support his family of eight.

Choi was placed in a Japanese military base in today’s Manchuria, where she was enslaved as a sex worker until the defeat of Japan in 1945. She spent some three years as a beggar after being released, and eventually managed to return to her hometown Gurye where she spent the rest of her life as a farmer.

“Time is running out for the surviving victims,” said a civic group the Korean Council for the Women Drafted for Military Sexual Slavery by Japan in a statement. “Tokyo should offer an apology and legal reparations as soon as possible to provide justice for the victims.”

Scholars estimate up to 200,000 women, mostly from Korea and China, were forced to work as sex workers for Japanese soldiers during the war.

Despite Seoul’s repeated demands for an apology and legal compensation for the victims, Tokyo has been claiming that all reparations were settled in the 1965 South Korea-Japan Normalization Treaty.

Of the 238 registered Korean victims of Japan’s wartime crimes, 192 have died as of Saturday. Of the remaining survivors, 42 of them reside in Korea while four live overseas.