There has been much debate surrounding the analysis of the economic success and political transformation of South Korea. 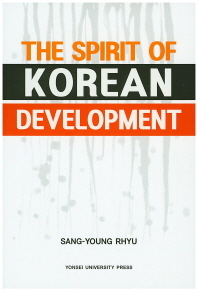 However, the interest of this book does not lie in the tangible factors behind its development.

In other words, this book offers an explanation for Korea’s miraculous development within the spirit of Korea. According to this book, Korea is neither unique nor diverse from an economic perspective.

Within the four stages of development, three factors related to the spiritual content of historical development were examined -- the historical memory of poverty, cultural “genomes” for democracy and human rights, and nomadic dynamism.

The book introduces seven success stories that emerged alongside the success of the spirit of Korean development -- Saemaul Undong, POSCO, the gold collecting movement, Hyundai, democratization, Samsung and the Korean Wave.

In order to trace an intangible spiritual and cultural impetus, this book introduces many words from major leaders as well as politico-economic anecdotes and historical incidents.