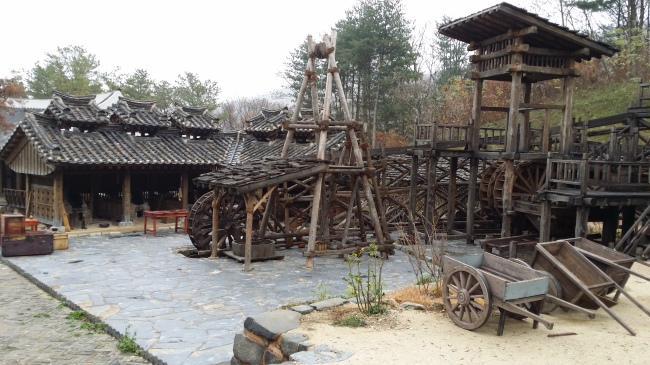 The set of Hwagidogam, or the Gunpowder Weapon Center where Joseon King Gwang-hae (played by Cha Seung-won) inspected weapons before delivery in “Hwa Jung,” stands in Yongin, Gyeonggi Province. (Park Hyong-ki/The Korea Herald)
This was where the Korean Wave, or hallyu, all started with TV network MBC’s 2003 period drama “Dae Jang Geum (Jewel in the Palace),” which spurred the popularity of Korean dramas, music, food and fashion across Asia.

The drama, which was based on the true story of Jang-geum, who was a chef and becomes Joseon Dynasty’s first royal female physician, was shot on this location. This place has been renovated and rebuilt into the open-set Dae Jang Geum Theme Park.

The 6,600-square-meter park, which is open to the public, offers visitors more than the outdoor sets of “Dae Jang Geum.” Actually, there are only a few sets from the drama left in the park, as they are being rebuilt for public display next year.

More than a dozen other MBC dramas including “Hwa Jung the Princess of Light” and “Lee San, Wind of the Palace” were filmed on this location. Some exterior shots of “Jumong,” the 2006 drama about the founder of the Goguryeo Kingdom, also known as King Dongmyeong, were filmed here as well. “Jumong” was a hit not only in Korea, but also in Iran where the historical drama gained ratings of over 80 percent.

Adjacent to the main park, there is the TV set of Hwagidogam, or the Gunpowder Weapon Center, where charismatic Gwang-hae, the 15th king of the Joseon Dynasty played by Cha Seung-won inspects the center in “Hwa Jung.”

The king was checking the weapons before supplying them to his troops in an area bordering China’s Ming Dynasty in a scene where Joseon and the Ming Dynasty faced threats of a Japanese invasion.

Also, visitors can see the Gyujanggak Royal Library in the park where a romantic scene was shot between Lee San (played by Lee Seo-jin) and his childhood friend Seong Song-yeon (Han Ji-min) in the drama “Lee San, Wind of the Palace.” The drama featured stories of Lee San’s early years as King Jeongjo, the 22nd king of the Joseon Dynasty and son of ill-fated Crown Prince Sado, who was sentenced to death in a rice chest by Lee San’s grandfather King Yeongjo.

The park also includes Injeong-jeon of Changduk Palace, where a variety of drama scenes involving royal coronation ceremonies and performances were shot. 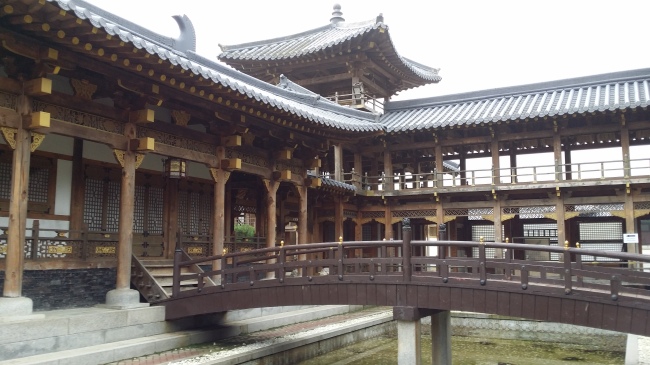 As it takes take about three hours to reach Yongin via public transportation from southern Seoul, it would be best to arrive by car. Some parts of its open sets will be restricted from entering and kept quiet due to filming. A full tour takes about 1.5 hours. For more information, call (031) 337-3241.