[ The Korea Herald – Send E-mail ]
‘More Korean nurses should be honored for independence fight’
By 이다영
Published : Nov 23, 2015 - 18:54
Updated : Nov 23, 2015 - 19:09
South Korea’s largest body of medical nurses on Monday made a public demand for the acknowledgement of the work by female nurses who were also independence activists during the country’s Japanese colonial rule (1910-1945). They deserve to be validated as pioneers in the history of Korea’s women, the Korean Nurses Association said.

At least 33 female nurses and midwives fought for Korea’s independence at home and abroad from 1907 to 1945, according to the association. But only 13 of them have been awarded the Order of Merit for their works. The group cited a study organized by professor Kang Young-sim at Ewha Womans University in Seoul.

According to Kang’s research, some 3 million Koreans, including nurses, worked as independence activists during the colonial era. However, only 13,000 of them have been recognized by the Korean government as people of national merit. Among them, only 241 are women. 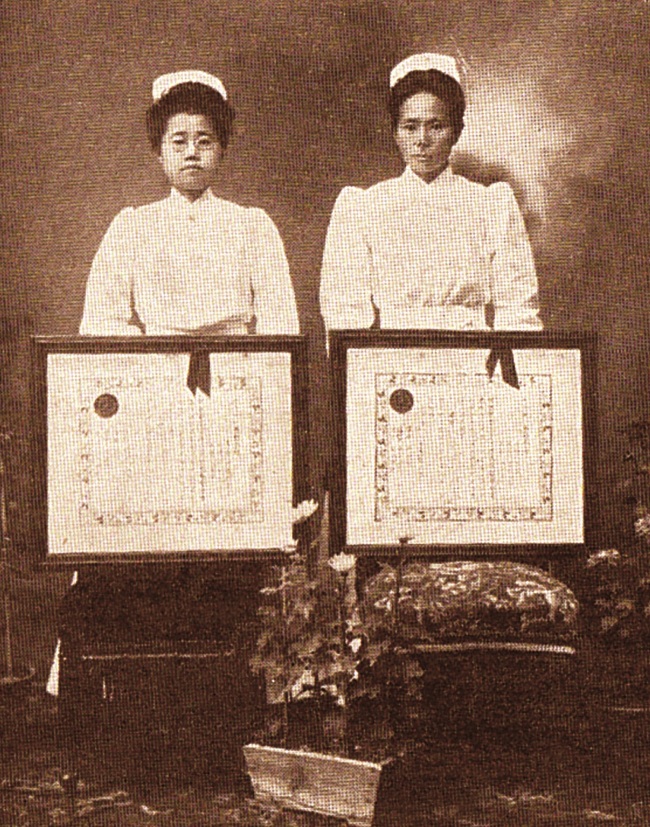 Korea`s first nurses Kim Martha (right) and Lee Grace (Korean Nurses Association)
In her research, Kang summarizes the lives of two nurses, who devoted their lives to independence activism after working as nurses. One of them is Park Ja-hye (1895-1943), who became a nurse after spending the first 10 years of her life as a child maid in the royal palace. She decided to become an independence activist after treating many patients who were injured while participating in the March 1st Movement, one of the earliest public displays of Korean resistance against the Japanese rule in 1919.

To become more involved, she moved to Beijing, where she met her future husband and fellow independence activist Shin Chae-ho. After marrying Shin and giving birth to their first child, Park was forced to move back to Korea alone, as the couple was financially struggling. She was pregnant with her second child at the time.

In Korea, she supported her husband’s activism in China, while fighting poverty and raising her two children alone. Shin died in 1936 while serving time in prison in Korea. In the same year, Park’s second child, who was 14 at the time, also died. Park died in 1943, two years before Korea was liberated.

The other nurse described in professor Kang’s study is Jeong Jong-myeong, who was forced to quit her studies and get married at age 17 because of poverty and was widowed at age 19. Instead of living with and serving her in-laws, which was the norm for Korean widows at the time, she chose to become a midwife and became involved in the nation’s independence movement.

In 1927, she established a women’s rights group called Geunwoohoe, which also functioned as an independence activism group. As a member, she also wrote for an independence magazine and gave speeches on women, labor and poverty.

Since 2008, the KNA has been researching prominent Korean female nurses in history, especially those who also worked as independence fighters and those who were sent overseas, such as to Germany, during South Korea’s rapid economic development in the 1960s and ’70s. It’s also been also demanding the government build a special museum dedicated to the history of Korea’s women. The National Assembly approved the notion in 2013 and the current National Women’s History Exhibition Hall is scheduled to be renovated into a museum.

Kim Ok-soo, director of the Korean Nurses Association, said learning about the history of Korean nurses resonates with today’s women.

“During the colonial rule, almost all Korean women lacked access to education and were therefore illiterate,” she said. “They were not allowed to make their own life decisions.

“But many of the nurses went against the social norms in spite of their class status and gender. They were the very first Korean women who voluntarily chose to have a specialized career that required very specific skills and training, while fighting for Korean independence.”