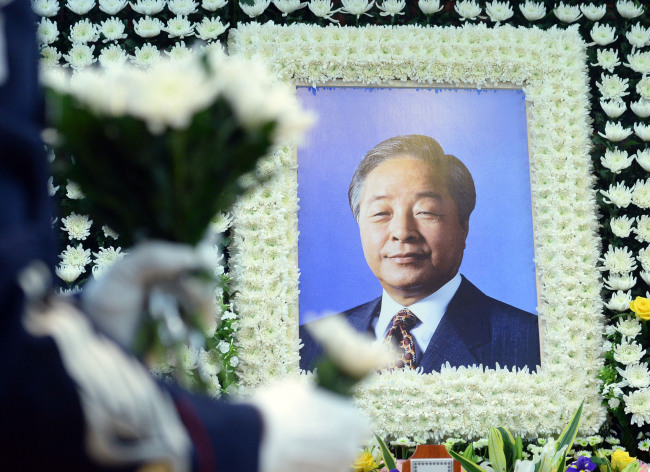 The late former President Kim Young-sam's photo is displayed at his wake at Seoul National University Hospital in Jongno-gu, Seoul, Sunday. (Yonhap)
Former South Korean President Kim Young-sam, the country’s icon of democracy who ushered in an era of civilian leadership to end more than three decades of military rule, passed away early Sunday. He was 87.

Kim, who led the nation from 1993-1998, died of sepsis and acute renal failure at around 12:22 a.m., according to Oh Byung-hee, the head of Seoul National University Hospital where he was hospitalized last Thursday for high fever and breathing difficulties.

Along with former President Kim Dae-jung, who died in 2009, he is noted for his grueling campaign against authoritative general-turned-leaders such as former presidents Park Chung-hee and Chun Doo-hwan of the 1970s and ‘80s.

Toward the end of his term, his political feats were overshadowed by his son’s influence-peddling and his government’s poor handling of the economy that forced the nation to accept a bailout program of the International Monetary Fund.

“He has already undergone surgeries several times before, due to blockages in the cardiovascular system. Adding to that was sepsis and acute distress, which led to a weakening of his heart and then his death,” Oh told a press conference as he confirmed Kim’s death.

“A stroke is an illness caused by a blockage in the blood vessel. We believe Kim died due to the worsening of his chronic illnesses.”

After he was hospitalized for a stroke and pneumonia for 18 months to October 2014, concerns persisted over the health of the former leader, who was credited with leading a peaceful transition of power from military-backed authorities, purging politically minded generals and enhancing transparency in financial transactions.

His family, including his second son, Kim Hyun-chul, a professor at Kookmin University, stood by his deathbed. His wife Son Myung-soon was not present in his last moments. Kim Hyun-chul said he informed her of Kim’s passing several hours later to lessen the blow.

The Seoul government at a Cabinet meeting decided to hold a five-day state funeral for the late leader. According to law, a state funeral committee headed by Prime Minister Hwang Kyo-ahn is to be organized.

The funeral ceremony is to be held Thursday at the National Assembly. Kim is to be buried at Seoul National Cemetery in central Seoul.

Kim, along with Kim Dae-jung and political heavyweight Kim Jong-pil, led the “Three Kims” politics in the 1980s and ‘90s.

His pro-democracy campaign put him behind bars and under house arrest, but helped undermine military-backed leaderships, reform the Constitution to enable a direct presidential election system and facilitate democratization.

The “Three Kims” politics faded officially into the past in 2004 when Kim Jong-pil failed to garner a parliamentary seat for his 10th term and retired from politics.

Born in December 1927 on the southern island of Geojedo, Kim was elected to the National Assembly at age 27, which still marks the youngest elected as an assemblyman, in 1954. He served as a lawmaker for a total of nine terms.

President Park Geun-hye, who was in Malaysia for summit meetings involving the Association of Southeast Asian Nations and other nations, expressed her condolences.

“After being informed of the death of former President Kim, I expressed my deep condolences and pray for the repose of the deceased,” Park was quoted as saying by Cheong Wae Dae spokesperson Jeong Yeon-guk.

“Our government will prepare, with honor, for his funeral in accordance with the related laws and the wishes of his family.”

The leaders of political parties visited the memorial altar to pay respect to the late leader.

Kim Moo-sung, leader of the ruling Saenuri Party, called the deceased leader his “political father.” He entered politics in the 1980s with the help of the former president.

“Kim was a political leader who achieved our society’s actual democratization,” said Kim, tears forming in his eyes.

Moon Jae-in, the leader of the main opposition New Politics Alliance for Democracy, said the nation should uphold the former leader’s spirit and philosophy for democracy.

“I feel very regretful that Kim, who enabled democracy to take root in this country and led the pro-democracy movement, passed away when our democracy is now facing a crisis again,” Moon told reporters.

Moon hails from Kim’s hometown of Geojedo Island and graduated from the same middle and high schools Kim attended. In 1990, Moon also joined a pro-democracy campaign then led by the late activist leader.

Kim Jong-pil also appeared at the memorial altar, saying the former president will be remembered forever in the minds of citizens as a “leader of determination.”