Citing South Korea as an example of global trade serving as a vehicle for rapid economic growth, Park said she was proposing to strengthen efforts to reduce trade barriers first to revitalize the sluggish economy.

“I recommend the G20 countries to make efforts to liberalize multilateral trade through bilateral or regional free trade pacts such as the TPP, and Korea will actively join the efforts,” she said during a working lunch, the last session of the G20 summit that ended Monday in Turkey. 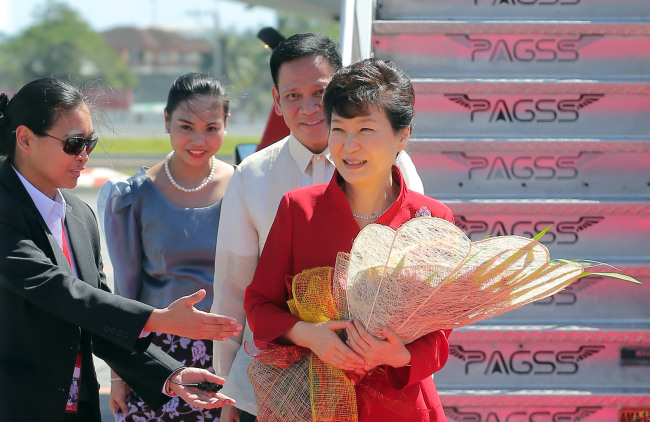 Park holds flowers presented upon her arrival in Manila on Tuesday. (Yonhap)

Park’s mention of the Trans-Pacific Partnership comes as her government is testing the waters before deciding to join the Washington-led trade deal. She has already expressed Korea’s interest in joining the TPP during her trip to Washington last month amid widespread criticism of the country’s hesitance to participate in the U.S.-led trade bloc.

Park also stressed the importance of sharing the benefits of free trade, urging developing countries and small and medium enterprises to join global value chains -- where the different stages of production are located across numerous countries.

“It is important to establish partnerships on technological transfers between advanced and developing countries as well as large and medium-sized companies,” she said.

The South Korean leader also urged advanced countries to be cautious in adjusting their monetary policies.

“The normalization of monetary policies of advanced countries should be adjusted in a careful and gradual manner by taking into account their impact on the world economy,” Park said.

The remarks came amid lingering worries over a potential U.S. Fed rate hike. But her top aide for economic affairs, An Chong-bum, said the issue was not on her mind when she delivered the speech.

Park also proposed to build a global financial safety net to stabilize the market during times of difficulties. She asked China to come up with an action plan on her vision by the time the country hosts the annual meeting next year.

Before wrapping up the two-day meeting, Park and other world leaders agreed to tackle issues regarding base erosion and profit shifting -- international tax avoidance techniques of high-profile multinationals that weaken a country’s tax base. The move is expected to ensure that the so-called Google tax will be levied against multinationals that try to avoid paying their dues in countries where they make profits.

Park arrived Tuesday in the Philippines, where she is set to meet leaders of the Asia-Pacific region on Wednesday for a two-day annual forum.

Leaders are expected to exchange their views on building inclusive and sustainable economies for the prosperity of the region. But with the forum taking place amid growing rivalry between Washington and Beijing, the central issue of discussions is widely expected to be the territorial disputes over the South China Sea.