World-renowned designers, artists, architects, brand marketers and tech entrepreneurs gathered at the Herald Design Forum to explore and share their insights on the future of design in a variety of fields in Seoul on Tuesday. 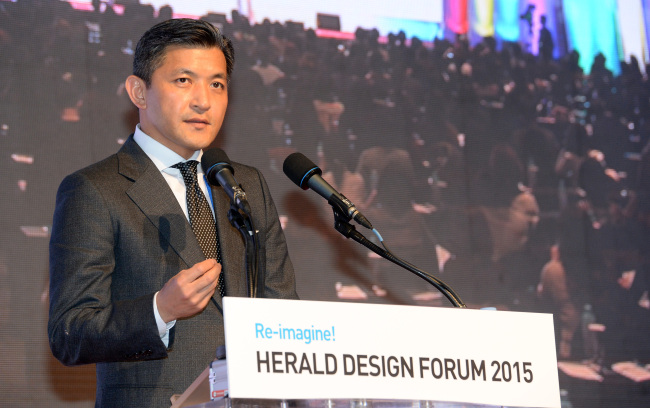 Herald Corp. Chairman Jungwook Hong addresses the audience during the opening ceremony of theHerald Design Forum 2015 at the Grand Hyatt Seoul on Tuesday. (Ahn Hoon/The Korea Herald)
In his opening speech, Chairman Jungwook Hong of Herald Corp., the forum’s organizer, said design is no longer confined to its own sector, and it is able to come up with groundbreaking solutions in this “creative and convergence” era where walls between industries, people, objects and environment have disappeared.

Speaking to a packed audience at the Grand Hyatt Seoul, Hong said design must now share its role with arts and science to provide intelligent solutions for the survival and prosperity of humankind.

“Design has a tremendous power to converge different fields and generate new creative solutions through the integration of form and function, arts and science and aesthetics and engineering.”

Hong added that it has become clear that design can solve humankind’s serious problems such as the extinction of rhinos that laws, regulations and ethics cannot.

Speaking on value sharing, Ban emphasized that design for him means “problem-solving” especially for the underprivileged.

This also requires designers or architects to break people’s common prejudices, like the notion that paper cannot be used as a building material.

“The most difficult thing is to break the prejudice of people … that paper is difficult to structure,” said Ban.

“Anything can be structured as long as you test and work according to building regulations.”

In Nepal, which was devastated by an earthquake early this year, he wanted to design and solve problems using materials left over from the natural disaster.

Also, Zuckerberg, who introduced the latest technology market trends, stressed the importance of passion, which sets apart successful start-ups from those that fail.

Although starting a company is really difficult, passion for storytelling that can inspire people to be creative and reach for their goals will help entrepreneurs realize their own dreams as well.

“Design should communicate what your brands stand for, and it also should inspire people to dream bigger,” Zuckerberg said.

“Design is the core thing that can change this.”

Other speakers said design is more than creating art over products as it combines various disciplines and technologies.

For Janne Kyttanen, a 3-D printing artist based in Los Angeles, design creates stories that can work in different genres -- thus, it is content.

“I see products more as content, never saw my work as design,” said Kyttanen at a session on 3-D printing and fashion.

“I have looked at design more as a technic, not as engineering, by putting 3-D over products.”

Tom Dixon, a self-taught industrial designer, also agreed that design is something that adds many more dimensions than shape-making.

“Design as a tool can help venture start-ups to differentiate their products’ graphic interface, marketing and communication in the market,” said Dixon.

These have all become possible due to computers whose processing power has been exponentially increasing over the years in accordance with the Moore’s Law, said Alvy Ray Smith, cofounder of Pixar.

Technology is offering infinite possibilities in solving problems and creating arts for all people.

With computers’ “order of magnitude increasing by 10 times every five years,” Smith said they would pave the way for more innovation in content.

The Herald Design Forum was launched in 2011 with the theme of “Design Changes the World.”

Now in its fifth year, this year’s forum -- under the theme of “Design Platform Creates Value Through Integration” -- invited 11 speakers across diverse fields who spoke at seven lectures and discussions with design aficionados in Korea and at a networking dinner event.